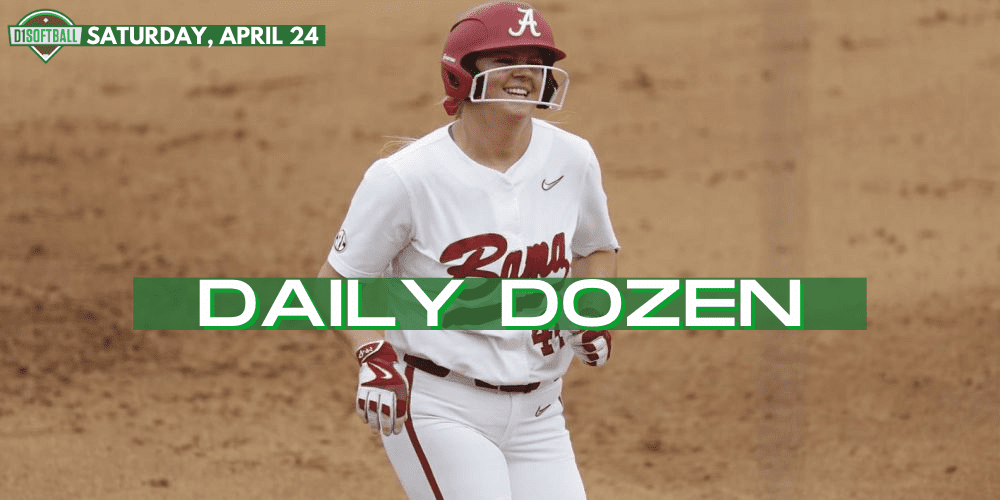 1. No rest for the wicked. Gabbie Plain was back at it again, starting game one of the Saturday doubleheader for Washington (35-8, 13-3), less than 24 hours following her first loss of the season to UCLA (27-3, 9-2). After giving up runs in the first and second inning, Plain settled into the contest, giving up just three hits the rest of the way in the complete-game win. The Huskies tallied 14 hits, with Morganne Flores and Baylee Klingler each hitting two-run home runs in the 7-4 victory. In game two of the doubleheader, Sarah Willis and Holly Azvevedo provided a pitcher’s duel through four innings. UCLA eventually broke it open in the bottom of the fifth, putting up a 5-spot in the bottom of the frame to lead to the 6-1 win. Washington is just half a game behind UCLA atop the Pac-12 standings. The Sunday afternoon rubber match will be broadcast on ESPN2 at 4 p.m. ET/1 p.m. PT.

2. Arkansas remains in first place in the SEC, but the margin got a little tighter after the Razorbacks (37-6, 16-3) were held to a season-low two hits in a series-opening 6-3 loss to Missouri. Arkansas jumped out to a 3-0 in the first inning on the strength of a Danielle Gibson three-run home run, but Mizzou shut down the powerful lineup for the remainder of the game. Jordan Weber held the Razorbacks to only one more hit, which was a Gibson double, before giving way to Emma Nichols, who threw 2.1 innings of hitless relief for the save. Kendyll Bailey belted the go-ahead home run in the fourth inning for Mizzou after Casidy Chaumont (3 for 4) had tied the game in the third with an RBI double. Mary Haff shouldered the loss for Arkansas, giving up six hits and five earned runs.

3. In Tuesday’s streak-snapping loss at Georgia, Oklahoma freshman Tiare Jennings failed to reach base for just the second time in her career. How did that affect her confidence? Well, she’s reached in nine of 12 subsequent plate appearances. That included five hits and two walks in No. 1 Oklahoma’s doubleheader sweep against Texas Tech on Saturday. She hit her 21st home run of the season and raised her batting average for the season back to .500.

4. The Ole Miss pitching staff continues to deliver and the Rebels continue to pile up SEC wins. Savannah Diederich allowed six hits and no earned runs as Ole Miss clinched the series win over Auburn with a 6-1 victory. The Rebels (31-15, 12-8 SEC) have registered the second-most SEC wins in program history. They have the third most wins in the SEC standings, tied with Alabama and behind only Arkansas and Florida. Diederich (11-8) and Anna Borgen (10-4) are trading wins to see who can top the other. On Friday night, Borgen held the Tigers to four hits in eight innings of a 1-0 win. Blaise Biringer delivered the walk-off RBI single. Ole Miss will try to notch its second SEC series sweep in the finale on Sunday. The Rebels have dropped the final game in their past two SEC series after winning the first two games.

5. Sami Williams isn’t leaving Ames without a fight. Inexcusably omitted from the 25 finalists for USA Softball Player of the Year released Friday, Williams led Iowa State to a crucial win against Baylor on Saturday — keeping alive hopes of an NCAA tournament appearance. Williams hit a home run, her second in as many games in the Big 12 series, and stole a base in Iowa State’s 6-4 win. She’s hitting .460 with 18 home runs and 51 RBIs this season. She led the Big 12 in total bases when the day began, and that was before her latest round-tripper.

6. For a few minutes, it appeared Lexie Blair had pulled off one of the rarest of rarities: an inside-the-park grand slam. In the end, she didn’t get the hit. She didn’t even get the RBIs. Oh well. Two wins against Northwestern were presumably a fair consolation prize. Blair’s rare feat in the opening game of Saturday’s doubleheader vanished in a scoring decision (the “grand slam” became essentially a four-base error). But four runs still scored. And Blair did get credit for an RBI double an inning later, part of Michigan’s 7-2 win. She was also standing on second base when Lou Allan hit a walk-off home three-run home run to win the nightcap. Allan finished the game with four RBIs in the 6-3 win. The sweep, combined with Minnesota’s split against Iowa, guarantees the Wolverines will finish the weekend in first.

7. Lexi Kilfoyl returned to the lineup with a bang. After sitting out since April 10 with “nagging injuries,” the sophomore hit the first home run of her career – a three-run shot – to give Alabama (35-7) an early lead in its 5-3 win over Louisiana (35-8) at Rhoads Stadium. Kilfoyl showed that her presence will not only be a big boost to the Tide pitching staff, but her bat will be a vital component for Alabama going forward, especially with season-ending injuries to Bailey Dowling and Claire Jenkins. Montana Fouts picked up the win for the Tide in the first game of an enticing two-game non-conference showdown this late in the regular season. Fouts gave up four hits with 11 strikeouts and two walks to beat Summer Ellyson, who gave up five hits with seven strikeouts and two walks.

8. Notre Dame entered its series at No. 13 Virginia Tech with a better RPI than the nationally ranked host. It needed less than 24 hours to prove the RPI had merit. But it was a busy 24 hours. After sweeping Friday’s doubleheader and waking up in time for a 9:30 a.m. first pitch Saturday, Notre Dame’s 4-3 win in nine innings clinched the series with a game to spare. Sarah Genz hit her first home run of the season — and just the third of the senior’s career — to provide the winning run. But that was only after Alexis Holloway, on top of pitching all nine innings, tied the game with a home run in the top of the seventh inning.

9. Apparently Tori Kniesche and South Dakota State didn’t take kindly to losing their first conference game of the season — especially against a bitter rival. One of this season’s most prolific mid-majors, South Dakota State lost the opening game of Saturday’s doubleheader 3-1 to South Dakota. That was the South Dakota State’s first loss in 15 Summit League games. The response? Kniesche threw a five-inning no-hitter, the first of her career, and struck out 11 batters as the Jackrabbits (30-5, 16-1) powered to a 10-0 win in the nightcap. A true freshman, Kniesche is now 16-1. South Dakota State’s Grace Glanzer no-hit Oregon State earlier in the season.

10. No. 20 Wichita State just can’t figure out Georgina Corrick. Way back on May 3, 2019, Wichita State beat USF’s Corrick with an eighth-inning walk-off hit. Apparently she took it personally. Corrick shut out Wichita State in the second game of Saturday’s doubleheader, a day after holding them to one run. She also shut them out the day after that 2019 loss. So her last three starts against the Shockers: 21 IP, 7 H, 1 ER, 30 K. The two efforts this weekend mean that despite beating USF 14-0 in the game Corrick didn’t pitch, Wichita State is in danger of losing its first series of the season.

11. Kate Gordon just continues to quietly drive in runs. And James Madison continues to quietly win games. Gordon’s three-run home run was one of the biggest blows in her team’s 10-3 win against UNCW. The Dukes improved to 25-1 with the win, the only team other than Oklahoma with just one loss. And Gordon’s four RBIs give her 175 in 196 career games. She entered the day 25th in career RBIs among active Division I players, but only four players ahead of her had also played fewer than 200 games: Oklahoma’s Jocelyn Alo, UCLA’s Aaliyah Jordan and Drexel’s dynamic duo of Kristi DiMeo and Linda Rush. That’s keeping good company.

12. It took much longer than Mississippi State hoped and many expected, but the Bulldogs (25-20, 1-13) finally picked up their first SEC win of the season. Mia Davidson’s three-run home run in the sixth inning broke the game open as MSU beat Texas A&M 8-1 to even the series at a game apiece. Davidson has 66 career home runs and is now just one home run away from tying the all-time MSU baseball and softball career record set by Rafael Palmeiro. Emily Williams went the distance for the Bulldogs, holding A&M to four hits and one run with seven strikeouts.

Bonus: Cal State Fullerton is off to its best start to conference play in program history with a 15-0 record. The Titans completed a three-game Big West series sweep of UC Santa Barbara on Saturday with 9-2 and 9-1 wins. To put this in perspective, it surpasses some impressive previous starts: the 2016 Titans started 12-0, the 1985 Titans only played 12 league games and went undefeated, and the 1982 Titans started 9-0-1. Keep an eye on CSUF.