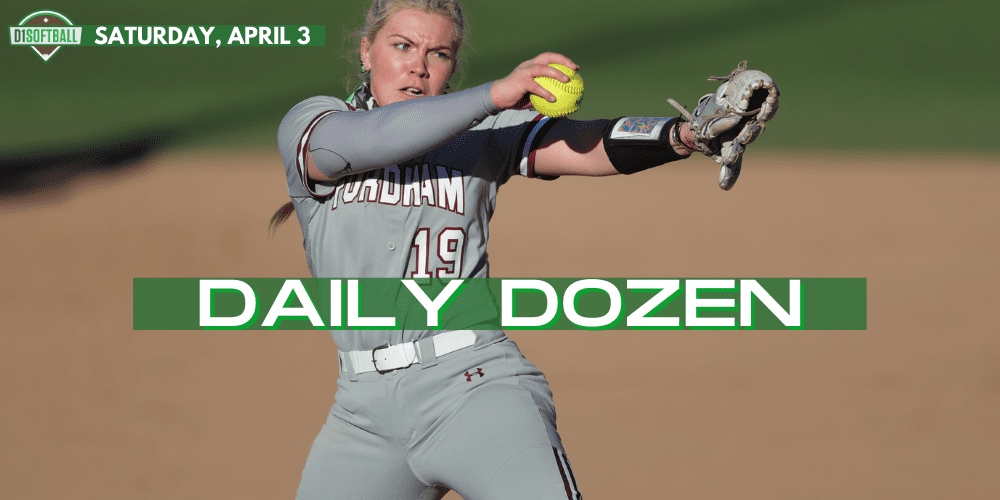 1. Having one perfect game in a season is rare for an entire program. Fordham sophomore Devon Miller threw two perfect games in two days. Miller achieved perfection on Saturday while striking out 12 batters to lead the Rams to a 13-0 run-rule victory over La Salle in five innings. Less than 24 hours earlier, Miller had recorded the first perfect game of her career when she also struck out 12 batters in an 8-0 run-rule victory over La Salle in five innings. Not only was it her first career perfect game, it was Miller’s first career shutout at Fordham (20-3), which has won 17 straight games. Miller is 5-2 this season with a 1.69 ERA and 73 strikeouts in 41.1 innings pitched.

2. Speaking of perfect games, Hailey Dolcini continued her fabulous season. One day after registering 18 strikeouts in a one-hitter, the Fresno State senior ace threw a perfect game against New Mexico in a 14-0 five-inning victory. Dolcini struck out 12 batters as the Bulldogs completed the sweep while scoring a season-high in runs. It was the second perfect game of Dolcini’s career and the 17th perfect game in program history.

3. While many series wrapped up Saturday in advance of Easter, Georgia and Florida are just getting started. And Mary Wilson Avant made sure it’s must-see viewing through Monday night. Wilson Avant didn’t have much luck in her first two appearances against the Gators — allowing nine runs in a little more than three innings way back in 2017 and 2018 (the second of those in the World Series). But she was ready for the long-delayed rematch, allowing just one hit in Saturday’s 4-2 win. The Gators had at least five hits in every game since late February. After dropping the series opener against both Missouri and Ole Miss, Georgia used Saturday’s opener for its biggest win this season.

4. Brooke Yanez and Makenna Kliethermes combined for 14 strikeouts as No. 3 Oregon fended off a late rally by Oregon State in a 4-3 win Saturday to clinch the rivalry series win. Yanez (13-0) had 12 strikeouts and two walks while Kliethermes entered in the sixth inning and threw 1.2 perfect innings with a pair of strikeouts to earn the save. Yanez struck out 34 batters over 19.1 innings against OSU to earn the win in each of Oregon’s victories.

5. Alabama’s pitching carried the Tide through some earlier games this season. The offense repaid the staff this weekend in a sweep of Texas A&M. Alabama beat the Aggies 11-3 (5 innings), 8-6 and 14-6 (6 innings) at Rhoads Stadium. The offensive production included grand slams by Claire Jenkins and Kaylee Tow. That enabled the Tide to still win games where Montana Fouts gave up six earned runs and Lexi Kilfoyl gave up five earned runs. Saturday’s victory was tinged with sadness. Alabama super fan, Luke Ratliff, known as ‘Fluffopotamus,’ died on Friday evening at age 23. Alabama head coach Patrick Murphy sported a plaid coat to honor Ratliff during a pre-game moment of silence, and pitcher Sarah Cornell wore a plaid bow in her hair.

6. Northwestern had a 3-2 lead and the bases loaded with one out in the top of the seventh inning Saturday at Maryland. The Terrapins handed the Big Ten leaders just their second loss of the season. Maryland escaped the seventh-inning jam with some help from a force at the plate, then tied the game on freshman Jaeda McFarland’s first career home run in the bottom of the frame. After Taylor Okada’s triple, Haley Ellefson’s fifth hit of the season brought home the winning run — and ensured she got the win as the relief pitcher who escaped the jam in the top of the inning. You see it every day, right?

7. Arkansas (31-3) swept its fourth straight series with three wins over host Auburn. The Hogs extended their program-record SEC start to 12-0, just one win away from matching Florida for the best start in the SEC since 2009, when the Gators were 13-0. Arkansas capped the series with a 2-0 win on Saturday in which Auburn walked home run threat Braxton Burnside in all four of her at-bats. The Hogs, which lead the nation in total wins, host Alabama next weekend to try and extend their conference perfection.

8. Erin Coffel is putting some major distance into the freshman single-season home run record for Kentucky. Coffel hit a two-run home run and a three-run home run in Kentucky’s 13-2 five-inning win over host Tennessee to even the series at a game apiece. The home runs pushed Coffel’s freshman program record to 14 for the season. The Indiana native crushed both balls to nearly the same spot over the left field fence, and belted another to the warning track that was caught. Coffel finished with six RBIs to push her season total to 41 in 106 at-bats.

9. Poignant. Bittersweet. Strange. Pick a word and it probably applies to the scenes in Philadelphia on Saturday, where Penn celebrated Senior Day four days after beginning its season. Cleared recently for Phase IV (essentially local competition) of the Ivy League’s response to COVID, Penn opened its softball season Tuesday against Delaware. Saturday it honored graduating seniors Abby Abramson, Eliza DeMers, Kayla Ketring, Stephanie Reheuser and Lucy Yang before sweeping two games from Saint Joseph’s. There is no Ivy League season and Penn has just six more games on its schedule at the moment. For the record, Abramson threw a four-hitter and Yang scored the winning run in the 2-1 win that opened the day.

10. Louisiana has games scheduled Monday, Tuesday and Wednesday this coming week. The way Julie Rawls is seeing the ball, the Ragin’ Cajuns may want to squeeze in a few more. Rawls hit two home runs and drove in five runs in Saturday’s 13-1 win that secured a three-game sweep against Georgia State. She totaled four home runs in the series — tripling her season total and tying Jade Gortarez for the team led (6).

11. After losing the first two games by one run, Ole Miss roared back by scoring five runs in the eighth to avoid the sweep and beat LSU 9-4. Sydney Gutierrez recorded the game-winner with her first career home run to lead off the eighth for the Rebels. Paige Smith put the victory on ice with a three-run home run – her second home run of the game and 10th of the season. It was the second eight-inning game of the series.

12. James Madison hasn’t had Odicci Alexander in the lineup since March 12 with an unspecified injury and didn’t use de facto ace Alissa Humphrey at all Saturday for undisclosed reasons. But no matter who is missing, the Dukes keep winning. The offense took charge against the College of Charleston, hitting nine home runs and scoring 28 runs across Saturday’s doubleheader. Kate Gordon split her two home runs across the games, while Lynsey Meeks hit a pair in the opener. Alexis Bermudez started and won both games, as James Madison moved to 13-1.

Baker’s Dozen: Bradley hit not one, but two inside-the-park home runs in one day to beat Missouri State in a doubleheader. Lucy Mead rounded the bases in the first game and Grace French repeated the feat in the second game.