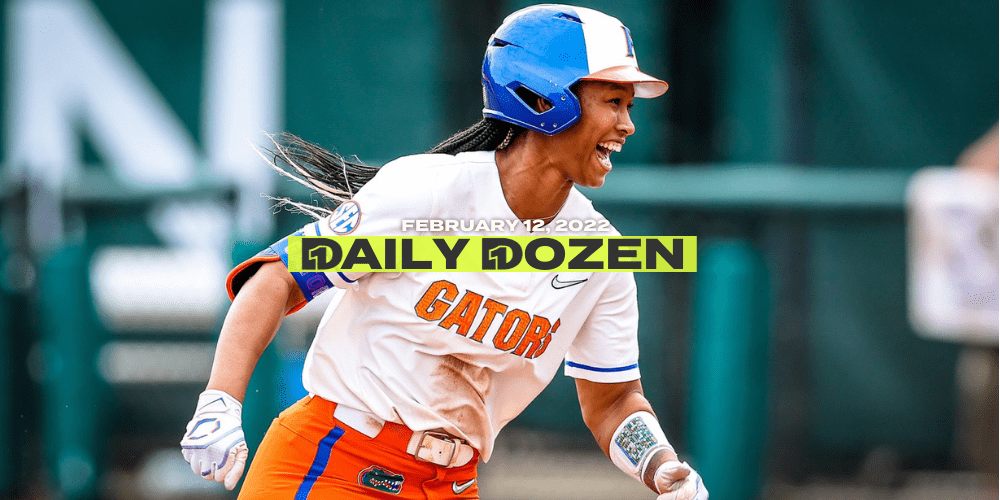 1. Jordy Bahl arrives. Saturday’s game against No. 4 UCLA marked the freshman’s third collegiate appearance. But No. 1 Oklahoma’s 4-1 victory was the first game that gives us a clue what she’s really all about. Bahl wasn’t spotted half a dozen runs before she even threw a pitch. She didn’t have the crowd on her side. She saw multiple strikeouts wiped off the board by illegal pitch calls. This was Bahl’s first moment on a big-time college stage, and everything her coaches and teammates said during the offseason held true. She sauntered and skipped, and celebrated every strikeout. She looked like she wanted to be there. She looked like she was loving all of it. Call me for an illegal pitch? Fine, I’ll just strike out the next batter. And Patty Gasso let her go. Gasso didn’t let Bahl finish a potential solo perfect game in her debut. But the coach left her in Saturday because these are the experiences that matter. Bahl allowed just a lone unearned run and four singles. She struck out 14 batters, the same number Montana Fouts fanned in the World Series. In a game in which it was Oklahoma’s “other” hitters who produced the runs, Jana Johns collecting two hits and Mackenzie Donihoo, Taylon Snow and Lynnsie Elam all driving in runs, the Sooners still had the most luminous star on a field full of them.

2. Tide Rolls in Tucson. To say Alabama made a statement on Saturday is probably minimizing the performance by Patrick Murphy’s group. The Tide scored 11 runs in five innings against Arizona, despite Kaylee Tow, Ally Shipman and Bailey Dowling combined to go 0-for-6. Instead, Lexi Kilfoyl, Abby Doerr and Ashley Prange (two) hit four home runs and knocked Hanah Bowen out in the third inning. Kilfoyl also threw a five-inning shutout, forcing 11 of the 18 batters she faced to ground out as the Tide completed a Pac-12 sweep after beating Oregon State 5-1 earlier. In three games this season, Alabama has scored 27 runs and allowed one.

3. A trademark Gators win. If you keep pounding the rock, eventually the successive blows will lead it to break open. That is how Florida’s offense operates. The Gators are persistent and patient. They gain information from each at-bat and wear down opposing pitchers. It may take until the later innings, but Florida usually comes up with the big hit to beat opponents. It happened again against Michigan. Senior Cheyenne Lindsey blasted a grand slam in the top of the sixth inning as the No. 5 Gators beat the No. 12 Wolverines 4-0. The decisive blow supported a sensational starting debut by Lexie Delbrey. The freshman carried a no-hitter into the seventh inning before Hannah Carson singled with one out. Delbrey finished with five strikeouts and two walks. It was only the second complete-game one-hit shutout of a Top 25 opponent by a Florida freshman all time (Stacey Stevens vs. No. 18 South Carolina, 2004). Lindsey’s grand slam came against Michigan ace Meghan Beaubien, who entered after Alex Storako loaded the bases with two outs in the sixth. Storako gave up three hits and three earned runs with nine strikeouts in 5.2 innings pitched.

4. Who wants to pitch to Olivia Johnson? Rutgers opted out of dealing with the freshman slugger when it faced Washington on Saturday. After Johnson reached base in every plate appearance in her first three games this season, including three home runs and a triple, the Scarlet Knights intentionally walked her four times (Johnson already has more intentional walks than the entire Washington team had last season). But the strategy backfired. Batting behind Johnson, Madison Huskey hit a double and a home run and drove in four runs in a 9-0 win. Although it may not be a comprehensive list (unless it never happened before 2000), the NCAA record book lists just 14 instances of a player drawing four or more intentional walks in a game.

5. A late-inning fiesta in Puerto Vallarta. Washington’s offense wasn’t quite done, and Johnson wasn’t the center of it this time. Arkansas’s Mary Haff had kept the Huskies in check for most of Saturday’s rematch. Down 4-2 in the sixth inning, Washington loaded the bases for Baylee Klingler, who entered the contest without an extra-base hit this season. She sent a ball to the opposite field for a grand slam to end Haff’s night. But the explosion wasn’t over. Three batters later, Kinsey Fiedler hit a two-run blast off of Chenise Delce. Huskey drove in two more in the seventh of UW’s 10-5 win. We also had to show you Sarah Willis’ home run robbery that occurred after the sixth-inning rally.

6. . American’s new strikeout leader. Senior Georgina Corrick became the all-time strikeout leader in American Athletic Conference history during USF’s 4-1 win over Michigan. Corrick struck out 11 to push her career total to 906, breaking the previous record set by Tulsa’s Emily Watson (903). Corrick is now only 197 strikeouts away from the USF career record of 1,103 set by Sara Nevins (2011-14). In the win over Michigan, Corrick gave up no walks and no earned runs on six hits.

7. Jenny Parsons earns first victory as Central Arkansas head coach in an upset fashion. Parsons spent 10 years as an assistant for the Sugar Bears before taking over the program this season. After being outscored 18-5 in the team’s first three games, Central Arkansas found itself deadlocked at 2 against No. 17 LSU entering the seventh inning. A Tiger error kept the frame alive and Jaylee Engelkes hit a two-out double to bring in the go-ahead run. Kayla Beaver closed out her complete game to give her coach the 3-2 upset win.

8. Louisiana’s Meghan Schorman shows no rust. Schorman left Kentucky as last season began and didn’t pitch anywhere in 2021 (settling on the Ragin’ Cajuns after an apparent change of heart about a move home to Missouri). But North Texas can attest she’s as sharp as ever after Schorman struck out 12 and threw a two-hit shutout in No. 22 Louisiana’s 5-0 win against the Mean Green. After two spotless relief appearances a day earlier, Schorman has 17 strikeouts in 11 innings for her new team. That tracks with what we saw in the abandoned 2020 season, when she struck out 45 batters in 43 innings and had a 1.67 ERA for Kentucky.

9. Boise State has started strong under first-year head coach Justin Shults. The Broncos improved to 5-0 following a 7-3 win over Stanford in their final game of the SDSU Season Kickoff. Alycia Flores sparked Boise State’s offense against the Cardinal, finishing 3 for 4 with a home run, double and two RBIs. Shults was named the fourth head coach in program history after spending the last three seasons as an assistant at Oregon.

10. Best pitcher in the nation through three days? Marshall’s Sydney Nester probably wasn’t your first guess. But at least statistically, it is difficult to argue anyone has been demonstrably more dominant. She certainly owns the city of Philadelphia. Nester shut out reigning Big East champion Villanova on Saturday, striking out 11 and allowing just two hits in a five-inning run-rule victory. That after she beat Saint Joseph’s with a two-hit shutout and 13 strikeouts on Friday. A grad transfer from NC State with two seasons of remaining eligibility, Nester has struck out 24 of the 39 batters she’s faced this season and has yet to allow a run.

11. Georgetown waits 706 days for a win. On March 8, 2020, Georgetown jumped out to an early lead and held on to beat North Dakota 6-4. For a program that didn’t compete in 2021, it was a long wait for the next victory. Still in high school in 2020, current sophomore Julia Parker pitched all nine innings in Saturday’s 3-2 win against East Carolina. Still at Liberty in 2020, Brittany Lew raced home with the eventual winning run on a throwing error. All told, just five of the 14 Hoyas who appeared Saturday also appeared against North Dakota in 2020. But one for whom the victory was especially sweet? Shortstop Savannah Jones. Her first-inning home run set the tone Saturday, 706 days after she scored the final run in the most recent win.

12. Devils Duel in the Desert. You were probably asleep for this game. You probably wish you weren’t asleep for this game. Following the vibe of a normal Saturday night in Tempe, Club Farrington was popping at 11:55 p.m. In a back-and-forth affair, Arizona State’s Kristiana Watson belted a two-run walk-off bomb to beat Duke 8-7 five minutes before the clock struck midnight. That was also Watson’s first career homer and now only needs 84 more to catch up to her mom, Laura Espinoza.

BONUS: Alabama’s Patrick Murphy provided the perfect response to a rule that needs to be changed. Let the players celebrate. It’s sports. It’s supposed to be fun. Don’t be like the NFL.