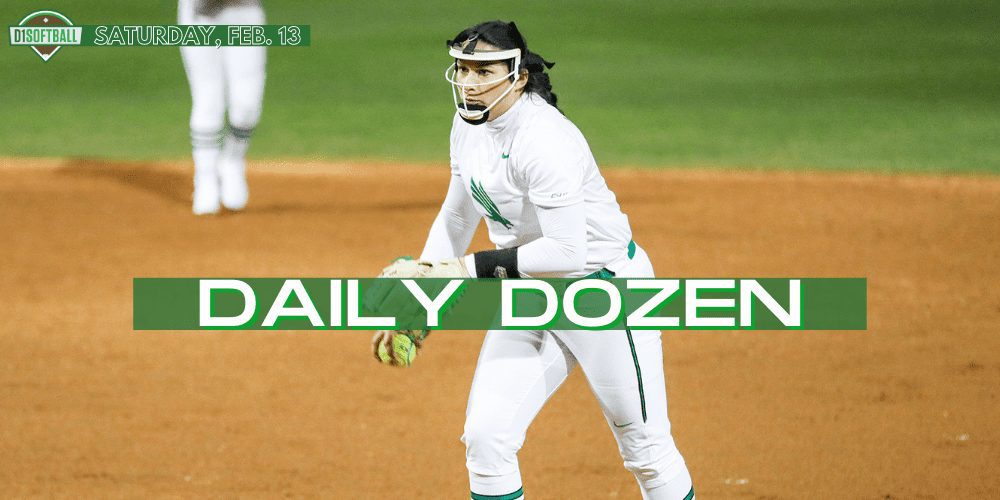 2. It was anything but a pitching duel in the desert between Washington and Southern Utah. The teams combined for 30 hits and 12 extra base hits in Washington’s 19-13 victory. All but one run was earned. The Huskies trailed 6-2 and 8-3 before pulling out the win. Outside of Gabbie Plain, UW’s pitching staff allowed 18 earned runs through its first three games.

3. It took both ends of a doubleheader at USF, but Charla Echols hit for the cycle Saturday to ensure the season started without incident for No. 6 Florida. Her seventh-inning two-run double broke up a 3-3 tie in the first game and propelled the Gators to a 6-3 win. Echols was also a big reason there was less drama in the nightcap, driving in four runs with a triple and home run en route to a 15-0 win.

4. Missouri bounced back from a loss to No. 11 Florida State on Friday to get even in the rematch on Saturday. Behind a 5 for 5 day from Brooke Wilmes, the No. 23 Tigers beat the Seminoles 9-5 in Tallahassee. Wilmes drove in three runs and scored three runs from the top of the order. Missouri jumped out to a 6-0 lead and out-hit FSU 17-6.

6. LSU flashed its defensive prowess a few times in a 5-3 win over Kansas, none better than this sensational diving catch in center field by Aliyah Andrews.

7. Houston’s Hailey Hudson and Auburn’s Maddie Penta both threw no-hitters in their collegiate debuts. Hudson struck out four batters and was nearly perfect in an 8-0 win over Texas Southern The rookie right-hander surrendered just one walk, needing just 61 pitches to get through her five innings of work. Penta struck out seven in an 8-0, five-inning win over Southeast Missouri. “For a long, long time, ever since I was a little girl, I’ve been waiting to have this opportunity,” Penta said. “I’ve been working for it. To be able to step out on this field and be with this amazing and amazing coaching staff is all I could hope for. It was amazing.”

8. Mississippi State avoided the upset in a season-opener filled with wild swings. Miami of Ohio scored seven runs in the fifth inning to take a 9-7 lead over the Bulldogs. But MSU battled back, with Carter Spexarth tying the game 9-9 on a single with two outs in the bottom of the seventh and Paige Cook drawing a walk-off walk for a 10-9 win. MSU won the nightcap in less dramatic fashion, beating Miami 10-3 with Mia Davidson and Fa Leilua belting back-to-back home runs.

9. It wasn’t enough to rescue Florida State against Missouri, as noted above, but Elizabeth Mason hit her third home run of the season in the loss and came within a few inches of another. She also hit a home run in Florida State’s win against Memphis earlier in the day. One of the ACC’s better run producers in 2019, Mason never found a groove in the shortened 2020 campaign and had just four home runs when play halted. She nearly matched that in a weekend in 2021.

10. If you missed this web gem on Friday, we are running it back to give some love to the South Dakota State defense. Along with the superb relay and tag, props to the Jackrabbits for navigating all the yard lines on the infield football field. But at least it’s warm!

11. Keeping with the Opening Weekend theme, there were more weather casualties on Saturday. Among the cancellations were the rematch between Arkansas and Oklahoma State in the Battle on the Bayou in Monroe, La., and the remaining games in the River City Leadoff Tournament in Jacksonville, Fla.

12. It’s an issue that’s been discussed over the years, but this weekend may heat up the talk again. Should the softball season push back the start date to wait for warmer weather? The Big 10 coaching contingent from the state of Michigan is lobbying for it.