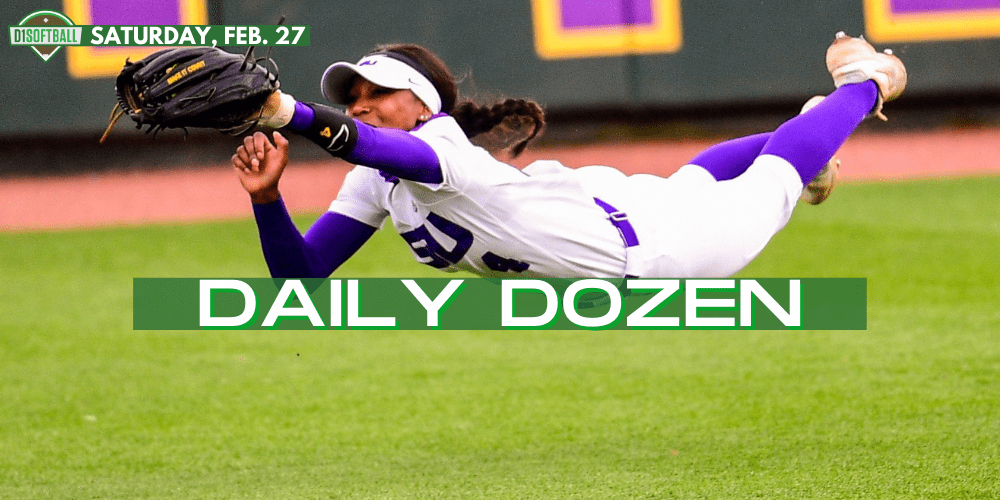 1. No. 2 Oklahoma trailed New Mexico 1-0 after the top of the first inning Saturday. Does that make this the greatest comeback in the history of college softball? It was at least the most comprehensive reversal of fortune. Finding new ways to drop jaws, the Sooners beat the Lobos 33-4 on a neutral field in Arizona. Among the more amazing facts about the performance is that it wasn’t even good enough to break the program record. The Sooners set that mark when they scored 35 runs scored against Arkansas-Pine Bluff on Feb. 28, 2014. But Saturday’s outburst was good enough to tie for 14th in NCAA Division I history — and third among major softball programs, trailing only the aforementioned Oklahoma team in 2014 and Louisiana in 2000. Surprisingly for the program that produced Lauren Chamberlain and set an NCAA record with 13 home runs in this season’s opener, the long ball wasn’t a big part of the run production in 2014 or 2021. The Sooners hit a modest three home runs Saturday and totaled seven extra-base hits — good, but far from their most prolific. Instead, 21 singles and 10 walks simply kept the bat moving up and down the lineup against the overwhelmed Lobos.  Eleven players had multiple RBIs but none had more than four (Jocelyn Alo, Grace Green and Jana Johns).

2. If it seems like Aliyah Andrews makes a once-in-a-career type catch every single game, it’s because she basically does. The senior centerfielder displayed her Superwoman-esque athletic skills yet again in LSU’s 3-2 victory over in-state rival Louisiana. Since we’ve run out of words to describe her, just watch the video and marvel:

3. Before falling to LSU in Baton Rouge, No. 7 Louisiana snapped No. 9 Oklahoma State’s program-record 24-game winning streak with a 7-1 victory. Summer Ellyson started in the circle for Ragin’ Cajuns, allowing two hits and no runs in 5.1 innings pitched. Louisiana scored four runs in the first inning to give Ellyson a comfortable cushion. The Cowgirls didn’t throw their aces – Carrie Eberle and Kelly Maxwell – after the duo helped OSU sweep LSU less than 24 hours before.

4. Arizona freshman Carlie Scupin is feeling right at home at the plate in the Wildcat Invitational. The Tucson native hit a grand slam for the Wildcats in an 11-3 six-inning win over BYU at Hillenbrand Stadium. On the opening day of tournament, Scupin belted three 3-run home runs in victories over BYU and Colorado State. She has a team-best five home runs, all coming in the last five games. Of her 16 RBIs this season, 14 have come in the four games at the Wildcat Invitational.

5. Alabama’s Rhoads Stadium has seen some no-hit history in 25 years. Jennie Finch threw the first no-no in the stadium in 2000. Kelsi Dunne threw no-hitters there on back-to-back days in a 2009 super regional. But Rhoads has never seen two no-hitters from the home team on the same day. It still hasn’t, but Lexi Kilfoyl and Montana Fouts gave it their best effort Saturday. A sophomore, Kilfoyl started things off with her first career no-hitter to lead the third-ranked Crimson Tide to a 2-0 win against North Carolina in the Crimson Classic. Kilfoyl is now 5-0 with a 0.23 ERA. Fouts then took the circle in the second game of the doubleheader and gave up a first-inning double — and nothing else in a 4-0 win until a seventh-inning single.

6. No. 21 Duke flirted with its own double no-hitter Saturday — quite the feat for a young program still looking for its first. Shelby Walters got things rolling with a six-inning one-hitter in an 8-0 win against Seton Hall. The Big East’s team only hit was a second-inning single. Peyton St. George went next, limiting Longwood to one hit in five innings in a 9-0 run-rule win. Her only blemish was a first-inning single. Now 10-1 with a 2.10 team ERA, Duke will eventually add a no-hitter to the list of program firsts. It came close to doing even more than that Saturday.

7. We can report that two days in, the Big Ten still hasn’t solved Michigan and Northwestern pitching. The Wolverines finally allowed some runs in sweeping Saturday’s doubleheader against Iowa, but only when neither Meghan Beaubien nor Alex Storako was around. Beaubien pitched a two-hit shutout and struck out 12 in her second start of the season. And while Storako’s start got messy enough that she had to come back in for a second stint, she wasn’t charged with an earned run in 6 2/3 total innings. Northwestern even upped the degree of difficulty on its pitching dominance. A day after throwing separate shutouts, Boyd and Williams teamed up for one against Rutgers. That was only after Sydney Supple – a guest on this week’s D1Softball podcast – shut out the Scarlet Knights in the first game of the doubleheader (and drove in three runs at the plate).

8. No. 8 Texas beat No. 18 Mississippi State 8-7 for its first win this season against a ranked foe. It had been just eight games since a Longhorns player hit multiple home runs in the same contest. It had also been nearly 365 days since anyone did what Shannon Rhodes did by going deep in her first two plate appearances Saturday. The second of her home runs staked Texas to an 8-1 lead, but it was up to transfer Molly Jacobsen to hold off the Bulldogs in relief. All three of her appearances this season have come out of the bullpen, a role Mike White said this week is a good fit for the lefty. It will be interesting to see if White sticks with that Sunday against Mississippi, Jacobsen’s former team.

9. Auburn freshman Maddie Penta struck out 17 batters, including 16 straight at one point, to record her second no-hitter of the season in a 5-0 victory over IUPUI at the Tiger Invite. Penta carried a perfect game bid into the seventh inning before surrendering a walk to IUPUI. Penta’s 17 strikeouts were the second most in a single game in program history. Aspyn Godwin was the catcher for the Tigers.

10. Ally Shipman broke out of her slump in a big way. The University of Tennessee junior catcher hit a walk-off 2-run home run as the Lady Vols beat Central Michigan 9-0 in five innings. Even better? Shipman’s big sister, Madison, a former Lady Vol All-American, was calling the game on SEC+.

12. It wasn’t a perfect day for Nebraska, which split its doubleheader against Michigan State in Florida, but Rhonda Revelle has had more good than bad days in her time with the Huskers. Nebraska’s 7-1 win in the first game of the day pushed Revelle to 1,000 career wins at the school – the first coach in Nebraska Athletics history to reach 1,000 wins. The Hall of Famer has played in the World Series, coached in the World Series and now joins the likes of Mike Candrea, Patty Gasso, Carol Hutchins and Patrick Murphy in winning 1,000 games at a Power 5 school.

BONUS: Grab the tissues for this heartwarming reunion.