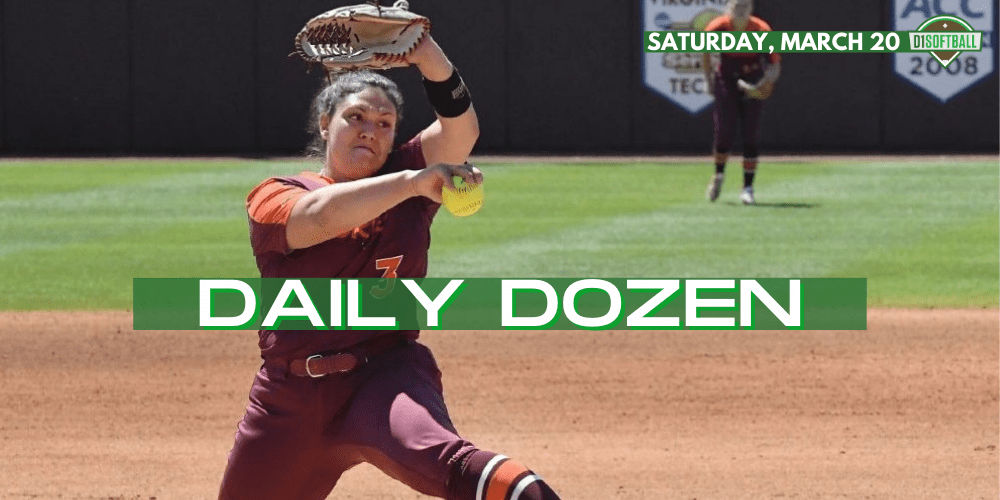 1. Keely Rochard was dealing in Virginia Tech’s 5-0 win over Pittsburgh. The junior struck out a career-high 19 batters in her fourth complete-game shutout of the season. Rochard allowed just one hit and carried a no-hitter into the sixth inning. Rochard’s previous career high was 16 strikeouts. She struck out the side in four of seven innings, and had at least two strikeouts in every inning. (ICYMI: Rochard was a guest on this week’s “Players Only” segment of the D1Softball podcast)

2. Makinzy Herzog came through in the clutch to secure a big win for Texas A&M in the team’s SEC opener on the road. Clinging to a one-run lead with runners on second and third with two outs, Herzog recorded her sixth strikeout as the Aggies defeated LSU 2-1 in Baton Route. Texas A&M (20-3) extended its winning streak to 10 straight games. Ashlynn Walls drove in the go-ahead run for the Aggies in the sixth inning and Morgan Smith hit a solo home run to lead off the second. Herzog threw a two-hitter and added her ninth double of the season in the series opener.

3. Rachel Cid’s first home run this season came in a lost cause. She made sure her second home run came in a win. The junior’s walk-off blast carried No. 3 Oregon to a 7-6 win against Utah on Saturday. Oregon trailed by 3-1 and 6-3 scores at various points. The Ducks trailed for more innings than they led in Friday’s opener. But just as Hanna Delgado’s sixth-inning triple in the opener put the Ducks ahead to stay in that game, Cid’s home run completed another comeback in the first game of Saturday’s doubleheader. Behind a Brooke Yanez shutout and a 3-0 win in the nightcap, clinching the four-game series with a game to spare proved easier.

4. UT Arlington brought a 3-16 record into Saturday’s game against No. 16 Louisiana and left with an 8-3 win and one of the biggest upsets of the season. UT Arlington’s record may overstate the team’s woes — it isn’t easy playing Baylor, Iowa State and Oklahoma. But it’s still a shocker.

5. The quick change of scheduling plans didn’t phase Florida State. The Seminoles swept through Kennesaw State and host Auburn with run-rule wins at the War Eagle Battle. FSU was supposed to host North Carolina this weekend, but the ACC series was postponed Thursday because of COVID issues within the UNC program. The FSU pitching staff was solid yet again. Caylan Arnold and Danielle Watson combined for the 11-0 five-inning shutout against KSU while freshman Kalei Harding drove in three runs. In a 10-1 five-inning win over Auburn, Kathryn Sandercock and Watson combined for a two-hitter. As for host Auburn, the Tigers dropped both games to KSU and FSU for their fifth straight loss.

6. The second game of the Arizona-Washington softball series was suspended in the sixth inning because of heavy rain in the Seattle area with UW leading 2-1. After a nearly three-hour delay, the umpires and coaches decided to postpone the game until Sunday morning at 11 a.m. PT. The third and final game of the series will begin 30 minutes after that game concludes. The teams will not play a fourth game, which is the new format in Pac-12 in this COVID-impacted season (only three games in all of the 4-game series’ count in the official standings).

7. It’s difficult enough to get through the Arkansas lineup for seven innings when the Razorbacks have Braxton Burnside, Danielle Gibson and Hannah McEwen together. You aren’t going to make it through eight innings. With that trio starting together for the first time in a long time, Gibson’s walk-off home run in the bottom of the eighth gave her team a 3-2 win against Ole Miss. Those three also teamed up to produce the sixth-inning runs that tied the game 2-2. Burnside returned to the lineup after missing Friday’s opener with an illness.

8. Want a good way to bounce back from a loss to open conference play? Send someone to the plate with more home runs than all but three players in Alabama history. Bailey Hemphill was tied four fourth in program history entering the bottom of the fifth inning of No. 4 Alabama’s game against No. 23 Tennessee. She had fourth place all to herself after the inning and after slamming a home run off the scoreboard. She trails only Kelly Kretschman, Charlotte Morgan and Kaila Hunt. The Tide cruised to a 7-1 win to level the series.

9. University of Texas junior Ariana Adams threw her first career no-hitter in a 12-0 victory over New Mexico in five innings. Adams allowed just two base runners while striking out four to record the 51st no-hitter in program history. JJ Smith was behid the plate for the Longhorns. Colleen Sullivan homered for the second straight game, doubling the sophomoore’s total for the entire season.

10. How many teams have back-to-back wins against ranked teams? Houston does. The Cougars are still on the wrong side of .500 for the season, but Saturday’s 3-1 win at No. 24 Baylor follows last weekend’s win against Oklahoma State on a neutral field. As she was last week, Sarah Queen was in the middle of things for Houston. Her two-run double off Gia Rodoni in the first inning staked Houston to a lead that Rachel Hertenberger didn’t relinquish in the circle.

11. No. 8 Florida entered the seventh inning of Saturday’s game against Mississippi State ready to sweat out a second consecutive 1-0 win. It won the game 10-0. That is quite an inning — and quite a relief for the Gators after so many SEC pitching duels already this season. Hannah Adams and Kendyl Lindaman supplied the only extra-base hits in the surge with back-to-back home runs. The late offensive fireworks overshadow a terrific pitching performance from Natalie Lugo in which she must have felt for most of the day that she had no margin for error.

12. South Carolina clinched the series against UCF with a doubleheader sweep. The Gamecocks run-ruled UCF 9-1 in the opener and closed the day with a 4-2 win. Kelsey Oh and Leah Powell earned the wins in the circle while UCF’s top pitchers, Gianna Mancha and Alea White, were saddled with losses. Mancha gave up four earned runs and walked five in 4.0 IP in the opener.

A scary situation emerged in the opening game of a doubleheader between Howard University and Norfolk State that was featured on ESPNU. Howard teammates Sydni Jones and Te’La Beard collided while pursuing a foul ball and remained on the ground for an extended period until emergency personnel arrived on the scene. Jones was rushed to the hospital for evaluation and was eventually released and returned to the team hotel. Beard was evaluated by EMT and the training staff from both universities and was able to stay with the team at the field.