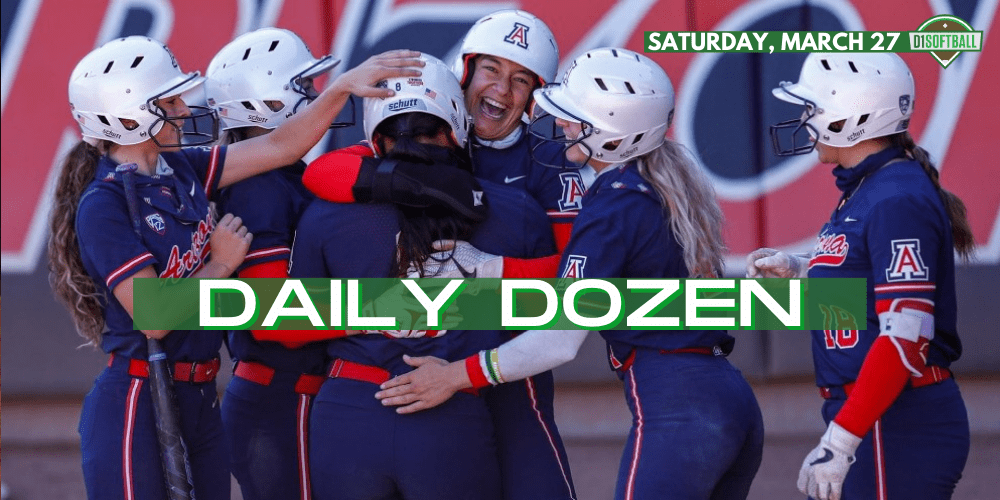 1. Jessie Harper is back in the home run hunt and her teammates joined in on the fun. The redshirt senior smashed a pair of no-doubters in Arizona’s victory over Oregon State along with three other Wildcats: Dejah Mulipola, Sharlize Palacios and Alyssa Palomino-Cardoza all had two-homer afternoons. With her two home runs, Harper sits at 84 career home runs, tied for seventh all-time with Shelby Pendley.

2. Maybe Shannon Rhodes was tired of all the close calls. After Texas flirted with disaster in its first two games in the Bevo Classic, narrowly beating South Dakota on Friday night and Texas-Arlington on a walk-off fielders choice in the first game of Saturday’s doubleheader, Rhodes took matters into her own hands. Her three home runs against Texas-San Antonio matched Tallie Thrasher’s school record and ensured a quick afternoon in an 8-0 win. It was the second multi-homer game of the season for Rhodes. Her 12 home runs this season are already a new career high.

3. A day after having their 17-game winning streak ended by Duke, the Clemson Tigers turned the table on the Blue Devils. Clemson snapped Duke’s 20-game winning streak and handed Peyton St. George her first loss with a 4-1 victory in Game 3 of the ACC series. Clemson’s Valerie Cagle (13-3) got the win in the circle and hit a two-run home run in the first inning to give the Tigers all the runs they would need. St. George (11-1) suffered her first loss since Feb. 28, 2020, which was also the last time she surrendered at least four earned runs.

4. There was no shortage of runs scored in the series opener between Alabama and Kentucky. The Tide scored 11 runs on 13 hits to beat the host Wildcats 11-6 at John Cropp Stadium. Bailey Hemphill hit a home run to push her career total to 56, two shy of Kaila Hunt and Charlotte Morgan for second place in the program record books. Alabama jumped out to a 6-0 lead, but allowed Kentucky to close the gap partly because of errors. The Tide pulled away again with five runs in the seventh. Kentucky got eight hits and four earned runs off Alabama starter Montana Fouts.

5. Arkansas rallied from a four-run deficit to remain undefeated in the SEC. The Hogs (27-3, 8-0) beat Mississippi State 8-7 at Bogle Park. Mississippi State led 4-0 in the second inning, with all four runs unearned via two errors. The Bulldogs led by four again at 6-2 in the third before Arkansas mounted a final comeback. Linnie Malkin blasted her second home run in as many days to finally give the Hogs their first lead in the fourth, and an RBI by Sam Torres proved to be the game-winner.

6. The Sun Belt series between Louisiana (18-6, 4-1) and South Alabama (16-10, 6-2) has been as close as expected. The Ragin’ Cajuns edged South Alabama 1-0 in both of the first two games to clinch the series. On Saturday, Kandra Lamb allowed three hits with 12 strikeouts in 6.1 shutout innings for Louisiana to outduel South Alabama’s Allie Hughen, who gave up four hits and one earned run in 6.2 innings. Ciara Bryan drove in the lone run with a walk-off RBI double in the bottom of the 7th inning to extend her hitting streak to 17 games. On Friday, Louisiana scored the only run on a squeeze bunt by Melissa Mayeux. Summer Ellyson threw a two-hit shutout with six strikeouts for the win. Freshman Olivia Lackie was the hard-luck loser for South Alabama, giving up two hits and no earned runs in 6.0 IP.

7. Give Iowa State credit for trying something new with Jocelyn Alo. But it didn’t work. At least not in terms of handing No. 1 Oklahoma its first loss of the season. Alo walked four times in Oklahoma’s 10-2 win in the second game of the Big 12 series. Amazingly, that’s just the second time this season she walked more than once in a game. That isn’t because Alo, who has just three strikeouts all seasons, is chasing pitches and getting herself out. Then again, it’s difficult to pitch around someone — even Alo — when Kinzie Hansen is waiting to make you pay for it. Hansen actually didn’t do the damage Saturday, but Grace Lyons and Taylon Snow did with five RBIs out the No. 4 and No. 5 holes. The Sooners have won 31 in a row, tied for 20th all-time and 15 shy of Arizona’s all-time record.

8. While we are on Iowa State and records, let’s just talk about the new all-time hits leader, Sami Williams. The right-handed slugger surpassed Brittany Gomez (2013-2016), who previously held the record, on a third inning double against the Oklahoma Sooners for career hit No. 298. Williams is batting .500 with 48 hits, nine doubles, a triple, 14 home runs and 40 RBIs in 29 games.

9. Michigan’s Alex Storako struck out 17 batters against Indiana — and her strikeout rate for the season dropped. That’s setting a heck of a bar for yourself. Storako won’t mind slipping a tick behind UCLA’s Rachel Garcia atop the national leaderboard because her complete game kept Michigan in Saturday’s action long enough to pull out a 3-1 win in nine innings. It was her sixth double-digit strikeout effort in six starts. She has yet to walk more than one batter in a game. But if Storako had a busy day, it was nothing compared to Northwestern’s Morgan Newport. The graduate student went 4-for-4 with a home run and two RBIs and worked 2 and 1/3 innings of one-hit relief in a win against Wisconsin to open a doubleheader. She wasn’t nearly done. In the nightcap, Newport threw a complete-game shutout and hit another home run to sweep the day.

10. Speaking of double-digit strikeouts, Keely Rochard has recorded 12 or more strikeouts in four of her last five starts (she had nine in the other start). The Virginia Tech junior had 16 strikeouts in the series opener against Louisville on Friday night and followed that up on Saturday with 12 in Game 2 to improve to 14-2 with a 0.88 ERA. With a total of 15 strikeouts in Saturday’s doubleheader, Rochard has 594 career strikeouts to pass Jasmin Harrell (588, 2010-13) for the fifth-most in school history.

11. While Alo and Harper chase Lauren Chamberlain for the all-time home run record, George Washington’s Jenna Cone is closing in on another, admittedly less official, home run record. Right now, Longwood’s Megan Baltzell has the mid-major career record with 76 home runs (we’re counting Louisiana as the major softball power it very much is). Cone hit two more home runs against Saint Louis on Saturday — after hitting three in a game against George Mason last weekend. She now has 64 for her career, fourth among all active players.

12. Not only is she a great softball player, Baylee Goddard is also a talented artist. The Florida sophomore designed and painted the shoes head coach Tim Walton wore for Sunflower Saturday, which honors families impacted by pediatric cancer.

Bonus: Washington will lose the series against Arizona State, but the Huskies salvaged some momentum with a 14-7 win in the nightcap of Saturday’s doubleheader. The Sun Devils clinched the series earlier with their own comprehensive 7-1 win (only the first game of the doubleheader counts toward the Pac-12 standings, unless Sunday’s finale can’t be played). Arizona State’s Kindra Hackbarth was the star in Saturday’s first game, hitting two home runs, while Washington’s Baylee Klinger and Jadelyn Allchin each drove in four runs in the nightcap.