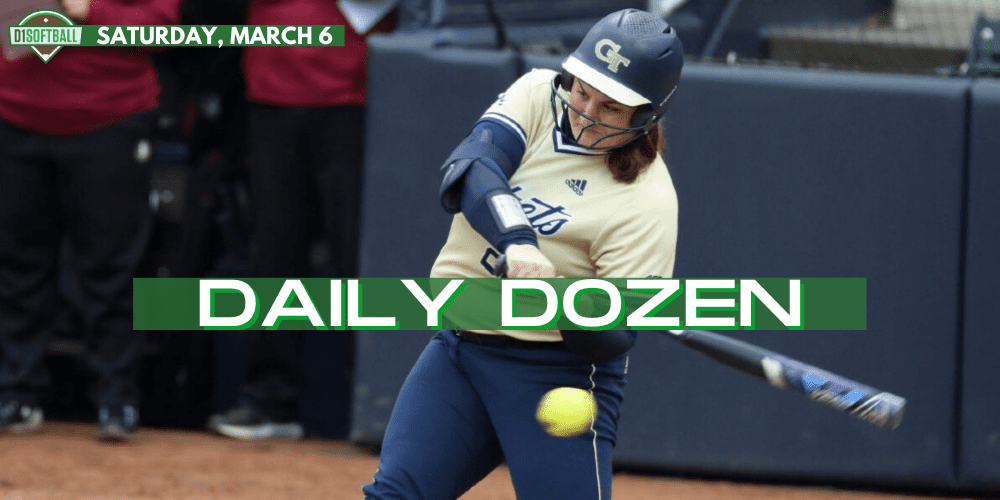 1. There were plenty of runs and high emotions in the ACC doubleheader between Georgia Tech and N.C. State. The Wolfpack won the opener 8-7 on a walk-off home run by Sam Russ. The second game was even more eventful. Trailing 10-6 and down to their final out, the Yellowjackets rallied to win 12-10 on a two-run double by Breanna Roper and a grand slam by Tricia Awald to snap a 12-game losing streak. Tensions ran high over the strike zone during the second game, and N.C. State head coach Jennifer Patrick-Swift was ejected. The teams meet in the final game of the four-game series today at noon ET.

2. It was a very long day in Baton Rouge. LSU and Texas played 16 innings and completed three games in the span of a few hours, with LSU winning the series 2-1 and handing the Longhorns (10-2) their first losses of the season. The teams were deadlocked 5-5 on Friday night in the top of the seventh inning when the game was suspended because of rain. Texas returned to the field on Saturday afternoon with two runners on base, and Taylor Ellsworth drove them home to help the Longhorns beat LSU 8-5. But the Tigers bounced back, capturing the second game 2-1 in eight innings and the third game 7-2. Aliyah Andrews was the spark for LSU offensively, going 5 for 8 with two runs and three RBIs in the final two games. The senior outfielder known for her uncanny defense even hit the first home run of her career that left the ballpark. Earlier in the week, Andrews hit an inside-the-park home run for her first career home run of any kind. Shelbi Sunseri and Ali Kilponen were solid in the circle for LSU. Sunseri threw all 8 innings in LSU’s first win, allowing just 4 hits, one earned run with seven strikeouts and no walks. Kilponen gave up seven hits and one earned run in 7.0 innings to clinch the series win.

3. The days are getting longer, the clocks will soon spring forward and an Oklahoma pitcher completed a game. Spring must really be on the way. Patty Gasso let Giselle Juarez go the distance Saturday as No. 1 Oklahoma beat No. 17 Missouri 5-2 in the first of two games between the former conference rivals this weekend. Despite a number of earlier run-rule wins, that’s the first complete game this season for the Sooners and the first time Juarez went the distance since 2019. (Oddly, the two most recent games in which she wasn’t relieved came in losses — against Alabama and UCLA, respectively, in the 2019 World Series.)  Much like Arizona State a week ago, Missouri put up a fight but couldn’t keep the ball in the park. Jocelyn Alo, Tiare Jennings and Kinzie Hansen all hit home runs for the Sooners.

4. Back in the comfort of home, Florida State’s bats came alive early to beat rival Florida 7-2 and split the weekend series. After being shutout by the Gators on Friday in Gainesville, the Seminoles turned the tables in Tallahassee to hand the Gators their first loss (14-1). Florida’s Katie Chronister entered the game with a 0.00 ERA in 22.0 innings pitched, but FSU chased her from the game in the 2nd inning and scored five runs in the frame on four hits. Kathyrn Sandercock held the Gator bats in check, throwing a complete game, allowing six hits and striking out six.

5. Kelsey Broadus pitched Texas A&M’s first seven-inning no-hitter in nearly a decade, but it was the hit the Aggies just missed in the bottom of the seventh in the nightcap against Tennessee that may cost them sleep. Broadus got her no-hitter in a 1-0 win against Campbell. It was just her third start for the Aggies as a graduate transfer from Boise State and her first complete game in her new home. But after escaping based-loaded jam after bases-loaded jam in the game against Tennessee, the Aggies still trailed by only a run with two runners on base in the bottom of seventh. Jourdyn Campbell appeared to win it when she caught all of a pitch from Ashley Rogers but it sailed foul down the let field line. But Rogers coaxed a fly out soon thereafter to preserve a 3-2 win.

6. Mississippi State’s Fa Leilua hit a walk-off home run in the eighth inning to defeat Alcorn State 6-5 at the Bulldog Invitational. Leilua went a 4-for-8 in two wins for the Bulldogs.

7. Vanessa Hernandez had a strong weekend at the plate for Fresno State as the Bulldogs won all three games at the Judi Garman Classic, beating Cal State Fullerton twice and LMU once. Hernandez, a junior, was 5 for 8 with three home runs, a triple, four walks, three runs scored and 12 RBIs.

8. Another weekend, another player hitting bombs for Arkansas. It was Braxton Burnside last week. Actually, it’s still Burnside, who hit her 11th home run in Saturday’s 13-2 win against Northwestern State. But this week it’s also Danielle Gibson. The first baseman hit two home runs and drove in five runs in the aforementioned win, and she hit five home runs and drove in 14 this week alone.

9. Throwback jerseys are one way to celebrate the sport’s past. Saint Francis and Bowling Green opted to stage an old-fashioned pitching duel instead. And NCAA strikeout leader Payton Gottshall didn’t get the best of it despite adding 11 more Ks to her total. Instead, Saint Francis sophomore ace Grace Velo no-hit Bowling Green in a 1-0 win to improve to 6-0 with a 1.14 ERA this season.

10. Eastern Kentucky head coach Jane Worthington picked up career win No. 800 in EKU’s first victory over SIU Edwardsville on Saturday. Worthington is the 32nd active NCAA Division I softball coach to win 800 games. She is the only head coach in EKU softball history, beginning the program in 1993. Worthington ended the day with 801 wins after EKU swept SIUE.

11. Sis Bates moved into a tie for the Washington career triples record by hitting her 16th in an 11-3 win over Hawaii. The senior shortstop finished 4 for 4 and scored after every hit. Bates needs one more triple to pass Ashley Charters and Becky Newbry for the solo record.

12. While No. 2 UCLA squeezed in a midweek win against Cal State Fullerton, the Bruins will have to wait until Sunday for any weekend action. Saturday’s game against Long Beach State was called off due to COVID-19 issues in the Long Beach program. The Big West school said it would pause all activities while consulting officials, casting doubt on Tuesday’s scheduled doubleheader against San Diego. Meanwhile, the Bruins announced they will host San Jose State on Sunday as scheduled. Elsewhere in the Pac-12, Stanford beat Nevada on Friday but saw Saturday’s rematch canceled when the Wolfpack withdrew from the DeMarini Invitational because of COVID-19 issues that apparently came to light between late Friday night and late Saturday morning.