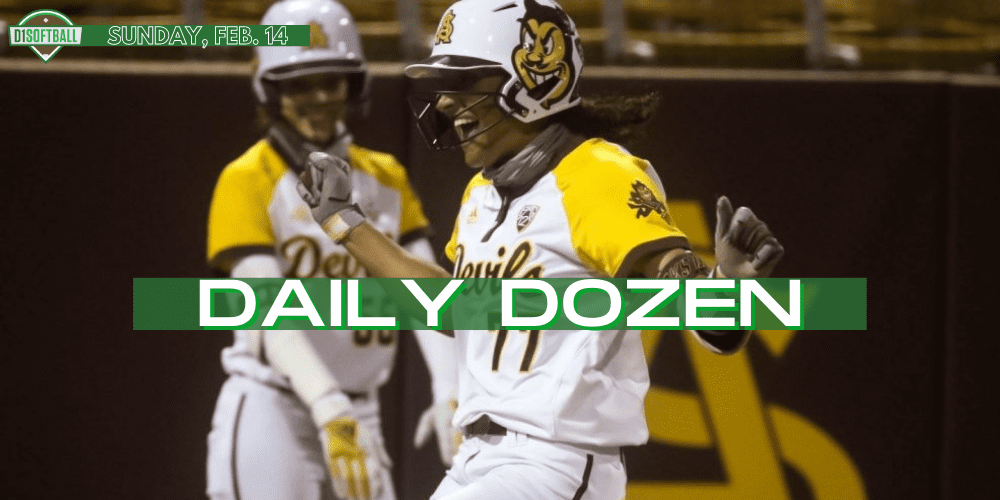 1. It wasn’t your imagination. Cancellations were the only thing piling up more quickly than Oklahoma home runs this weekend. The Top 25 played a total of 56 games this week. That’s not even half as many games as the Top 25 played during opening week a season ago (114). And at least officially, this was almost all Mother Nature’s chaos — we haven’t even gotten to major COVID disruptions (although that didn’t help, with the likes of UCLA missing out on games due to COVID issues within the Cal Poly roster). And as winter storms bear down on much of the country, it’s not guaranteed to get better soon — Baylor already canceled its midweek home opener due to the forecast.

2. Arizona State swept the Kajikawa Classic for the first time since 2017 scoring 32 runs in four games. The Sun Devils beat Utah in their final matchup of the tournament, 9-4. The offense tallied 11 hits against the Utes

3. Welcome back, Ashley Rogers. After missing the shortened 2020 season with a stress fracture in her back, the Tennessee junior ace returned to the circle by throwing a one-hitter with 13 strikeouts in a season-opening 10-0 win over Eastern Kentucky in five innings. Ally Shipman, Kiki Milloy, Ashley Morgan and Arizona transfer Ivy Davis belted home runs to back Rogers. The Lady Vols swept the hastily-scheduled doubleheader with a 3-2 win in the second game. It was the first-ever home season opener for the Lady Vols, and it only came because the Kickin’ Chicken Classic in Conway, S.C. was canceled due to inclement weather. EKU saw its 18-game winning streak snapped, which was the longest active streak in the nation entering the season.

4. Virginia Tech’s Keely Rochard opened the 2021 season with back-to-back shutouts, beating Kennesaw State on Sunday with a two-hitter and seven strikeouts. She also didn’t allow an earned run in her final 27 1/3 innings a season ago. In fact, if not for a meaningless two-out, seventh-inning home run last February, she would be working on a scoreless streak of 83 1/3 innings. Not that her current streak of 41 1/3 consecutive scoreless innings is too shabby. The Hokies also got a shutout from freshman Ivy Rosenberry on Saturday, so maybe Rochard will have some help.

5. Taylor Bauman hit a three-run home run in the bottom of the sixth inning to help Florida Gulf Coast University beat No. 22 UCF 3-2 for its lone win in the four-game series. UCF won the first two games by run rule on Saturday, and capped the series with an 8-5 victory in the second game on Sunday.

6. Oregon State started a season’s opening weekend 5-0 for just the third time since reaching the World Series in 2006. The Beavers beat Loyola Marymount 5-1 on Sunday after sweeping through the Easton Invitational with four wins against Cal State Fullerton and Utah State. Not surprisingly, Mariah Mazon was key to the success. She allowed just one earned run and struck out 10 in Sunday’s win and finished the weekend 3-0.

7. Patrick Murphy recorded his 1,100 win at Alabama when the Crimson Tide defeated Louisville in the opening game of a doubleheader sweep at Rhoads Stadium. Murphy is in his 23rd season at Alabama, and is now 1,101-311 leading the national championship program.

8. Washington finished the weekend with a 7-0 win over Dixie State, capturing its fifth win of the season. Baylee Klingler became the fastest Husky ever to 40 RBI on a first inning blast against Dixie State. The junior infielder managed this feat in just 30 games. The Huskies also received another strong day at the plate from Sami Reynolds who drove in four runs, one off her career-best mark, including her third homer of the year.

9. Don’t look now, but Western Illinois might have itself a coach. And if you’re a softball fan, you won’t need an introduction. Down 7-1 entering the seventh inning against DePaul on Sunday, Western Illinois scored six runs to send the game to extra innings. Two well executed fundamental plays, a sac bunt followed by a sac fly, brought home the eventual winning run in the eighth inning. The coach whose team kept its cool and beat a program with a World Series pedigree? That would be former Georgia All-American Alisa Goler, who’s in her first season atop the program.

10. Brianna Bailey threw three no-hitters in her time at Chipola College, also winning a junior college national championship while she was there. It may not mean Troy is a national title contender quite yet, but Bailey threw her first Division I no-hitter in her first Division I start Sunday. Bailey didn’t allow a hit and struck out six in Troy’s 8-0 run-rule win against Belmont.

11. Who would you want playing softball in a dome more than someone who used to play college basketball? Iowa State’s Ellie Spelhaug (who signed to play hoops at Bradley) moved to 3-0 on the season by allowing just one earned run in a complete game win against Drake on Sunday. That means Iowa State sits atop the Big 12. At least for a week. Sure, Oklahoma smashed some home run records, but Iowa State was the only conference team to start the season 5-0. This year more than ever, playing inside at the UNI Dome in Cedar Falls, Iowa was a wise move.

12. The season is only a few days old, but the defensive gems are already piling up across the nation. In case you missed this extraordinary display of athleticism from Florida State’s Josie Muffley on Saturday, have a look: