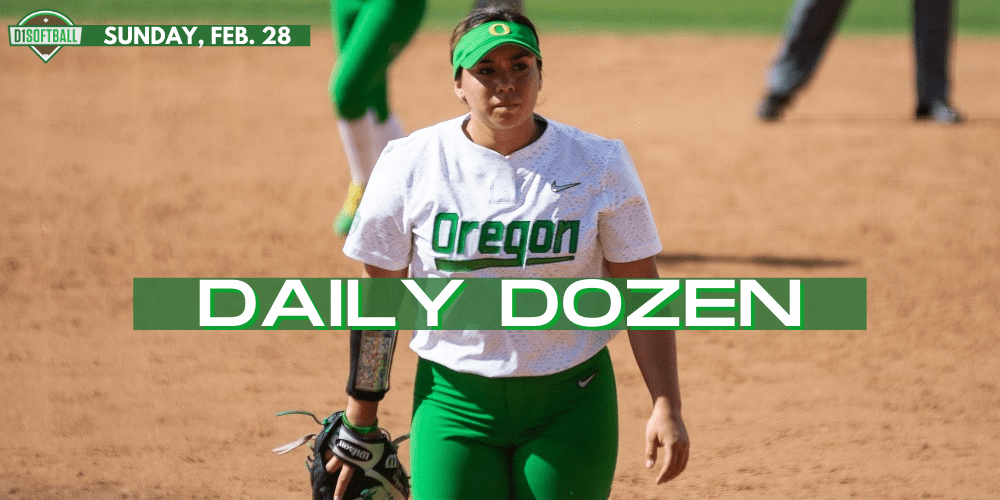 1. It doesn’t count in the Pac-12 standings, but Oregon (9-0) put everyone on notice by beating No. 1 UCLA and Utah in Arizona to remain undefeated. Brooke Yanez came through in the clutch, striking out the final two batters in Oregon’s 3-1 win over UCLA (6-1). The Bruins scored a run and loaded the bases in the bottom of the seventh, but Yanez recorded back-to-back strikeouts to end the threat. The junior left-hander struck out 10 in the complete-game victory – her third straight game with 10 or more strikeouts. Megan Faramio took the loss for UCLA. The Ducks kept the good vibes rolling in the nightcap, beating Utah 7-2 after a bit of a slow start. Alyssa Brito homered in both games for Oregon – her fourth straight game with a home run. Oregon is off to a 9-0 start for the second straight season, but this time it has more weight given the quality of the opposition. Want more? Oregon and UCLA meet again this afternoon at 10 a.m. PT/1 p.m. ET.

2. The state of Oregon’s other Pac-12 team nearly created as many headlines in the desert. No. 4 Arizona needed Hanah Bowen’s walk-off single to a complete a two-run rally in the bottom of the eighth and beat Oregon State 3-2. Capping an enormous week at the plate, freshman Carlie Scupin also had an RBI in the extra frame. That was her 15th RBI of the week. The Wildcats and Beavers will play four more games in Tucson at the end of March.

3. Entering Sunday, Illinois had just six wins against Michigan in program history. It picked up two more Sunday with time left to catch the lunch specials in Leesburg, Florida. In the biggest surprise of the first weekend of Big Ten pod play, the Illini beat the Wolverines by the same 2-1 score in both ends of a doubleheader. And after Michigan’s Meghan Beaubien and Alex Storako dominated batters the previous two days, Illinois did it by beating the Wolverines at their own game. Sydney Sickels went the distance in the first game and showed some poise getting out of a jam in the bottom of the seventh. She recorded her first four walks of the season, but she also struck out nine batters to push her total to 21 in 15 2/3 innings. What looked like a potential breakthrough 2020 season, before the pandemic shutdown, appears back on track in 2021. The second win was a team effort, Morgan Scivally, Addy Jarvis and Sickels teaming up for the win. Sickels aside, the collective summed up a weekend in which Tyra Perry used different starters in each of the team’s first four games and five starters in all. The Big Ten gave its teams a marathon schedule, and Illinois had the best closing kick.

4. Oklahoma’s lineup smashed an NCAA single-game record for home runs in the season opener. Those batters then piled up 33 runs and a program-record 28 hits in a win Saturday. The second-ranked Sooners so far have been offense, offense, offense. And to borrow a line from the Michael Jordan meme, the pitching staff took that personally. Stealing back the thunder, Giselle Juarez, Nicole May and Brooke Vestal combined for a five-inning perfect game in Sunday’s 8-0 win against Portland State (yes, the offense still did its thing, too). It is the program’s first combined-effort perfect game since Juarez, Mariah Lopez and Shannon Saile teamed up in a 2019 NCAA regional.

5. Granted the competition wasn’t elite, but Tennessee’s performance in the circle was nothing short of dominant. Junior Ashley Rogers had a career-high 18 strikeouts in a 3-0 win over Central Michigan and junior Sam Bender followed with a five-inning no-hitter in an 8-0 win over Northern Kentucky. Rogers surrendered just two hits and did not allow a walk against CMU. Her 18 strikeouts came only four days after she recorded 17 strikeouts in a win over Illinois State. Rogers has 76 strikeouts in 40.0 innings pitched this season. Bender’s no-hitter was the 50th in program history, and first solo no-hitter since 2016. Rylie West was the catcher for Rogers and Ally Shipman caught Bender.

6. Senior Hannah Adams kept Florida’s record unblemished with a walk-off home run in the bottom of the eighth inning as the Gators beat McNeese State 1-0. Adams belted a 1-2 pitch over the center field wall with one out for her second walk-off winner this season. Pitching carried the day for Florida (12-0) in the win over McNeese and a 2-0 victory over Louisville. Katie Chronister, Natalie Lugo and Elizabeth Hightower allowed a combined four hits and one walk through 15.0 innings.

7. Troy pitcher Leanna Johnson showed no intimidation against No. 3 Alabama at Rhoads Stadium. The sophomore right-hander allowed just two hits and one earned run while striking out five in a 2-0 loss to the Tide. There is a reason she ranked No. 6 on D1Softball’s Analytics rankings for the 2020 season. Lexi Kilfoyl earned the win for undefeated Alabama (14-0), scattering three hits with nine strikeouts. Candela Figueroa was the catcher for Troy and Abby Doer was behind the plate for Alabama. Kilfoyl (6-0) was named MVP of the Easton Crimson Classic while Johnson (7-2) was an all-tournament selection. Troy fell to 13-3, with the losses coming against Alabama, North Carolina and Liberty.

8. No. 23 Baylor may lose its grip on the Top 25 after an up-and-down weekend, but did it do enough Sunday to take No. 18 Mississippi State with it? After losses against Mississippi and UConn earlier in the weekend, Baylor avoided falling to .500 by beating Mississippi State 10-6 in an early start Sunday. Ahead of a difficult midweek doubleheader at Louisiana, Baylor picked up momentum with big days from Nicky Dawson, Lou Gilbert and Goose McGlaun at the top of the lineup (eight hits Sunday) and quiet relief innings from Gia Rodoni. But what of the Bulldogs? There isn’t necessarily a bad loss in the bunch, but setbacks against Texas State, Texas and Baylor highlighted an unsettled pitching mix heading into a midweek game against Alabama.

9. No. 9 Oklahoma State avenged its loss to No. 7 Louisiana with a 5-3 win in nine innings to close out the Tiger Invitational in Baton Rouge. Sydney Pennington’s 2-run home run in the top of the ninth inning was the difference for the Cowgirls (13-1). Carrie Eberle picked up her team-leading fifth win, allowing one earned run while striking out five in 8.1 innings. Kelly Maxwell recorded the last two outs in relief to earn her first save of the season. Less than 24 hours earlier, Louisiana had snapped OSU’s program-record 24-game winning streak.

10. You thought your car was safe out beyond the left field fence at Bogle Park — nearly 300 yards away from home plate? Not with the way Braxton Burnside is teeing up the ball for Arkansas these days. Burnside blasted a Mars shot in Sunday’s run-rule win against Texas Tech that her hitting coach measured at 299 feet. That was Burnside’s sixth home run of the week and perhaps puts Nicole Schroeder’s single-season record in play.

11. Arizona, Oklahoma and … Southern Illinois? Mother Nature did Sunday what no team yet has this season, keeping Southern Illinois from victory (or defeat, in this case). Weather washed out the final day of play at the Coach B Classic in Carbondale, Illinois, leaving the Salukis 3-0 for the weekend and 9-0 this season (including wins against Mississippi State and DePaul). Southern Illinois is in rapidly dwindling club of unbeaten teams. And even with Sunday’s cancellations, only Alabama, Arizona, Florida, Kentucky, Oklahoma and Oregon remain perfect with as many total wins. Creighton, UIC and Northern Kentucky visit next weekend to try and break up a winning streak that stands at 18 games dating back to 2020 — second longest in the nation.