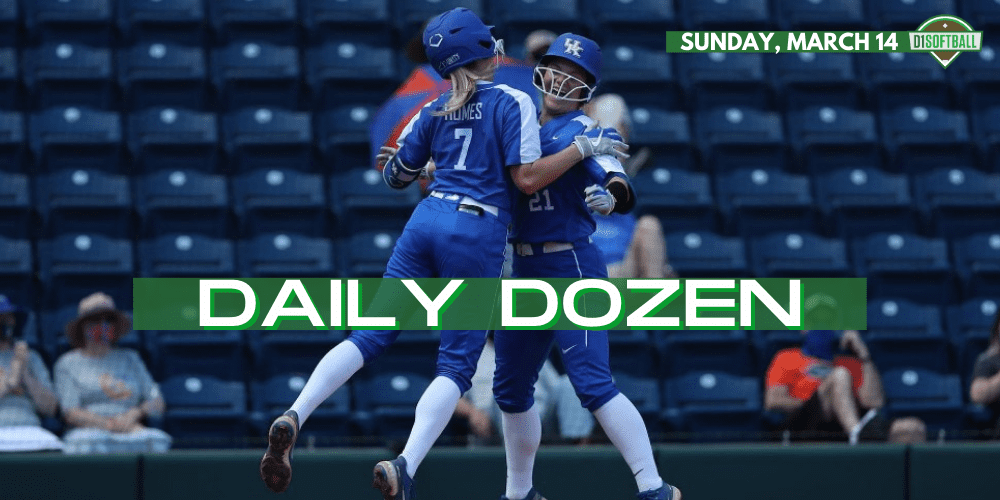 1. It didn’t matter how long it took. Kentucky wasn’t leaving Gainesville without at least one victory over host Florida (17-2, 2-1). The No. 13 Wildcats (20-2, 1-2) would have preferred to close it out in seven, but they got the job done with a 4-2 win in nine innings to avoid the SEC-opening series sweep and notch the program’s first victory at Katie Seashole Pressly Stadium since 2012. After the No. 8 Gators rallied from a 2-0 deficit to tie the game in the bottom of the seventh, Kentucky sophomore Rylea Smith made a great diving catch in left field with two runners on base to prevent the walk-off by Florida. Smith then delivered the game-winning RBI in the ninth with a single. Autumn Humes picked up the win for the Wildcats, throwing 7.1 innings while allowing just two hits and no runs. Kentucky’s Erin Coffel hit her 10th home run of the season – a 2-run shot in the first – to become the fastest freshman to reach 10 home runs in program history. Kentucky’s base running mistakes could have come back to haunt the Wildcats. They ran themselves out of at least two potential runs, but came through with the clutch plays to leave Florida with a better feeling than in past years.

2. North Carolina State is the program known for swinging for the fences, but Virginia Tech was the one showing off its home run prowess to close out the four-game series with three wins. The Hokies belted a program-record eight home runs, including five in the fifth inning, to run-rule the Wolfpack 17-4. Kelsey Bennett set a single-game school record with three home runs for the Hokies and finished with seven RBIs. Jayme Bailey started the air show in the fifth with a two-run blast. Alexa Milius belted a grand slam, Cameron Fagan hit a solo homer, Bennett unleashed a three-run shot and Morgan Overaitis hit her first career home run.

3. Liberty had a chance, which is more than almost anyone else can say about playing No. 1 Oklahoma. It wasn’t going to get a second one. Forced to sweat out a tie game as late as the sixth inning for the first time all season, the Sooners pushed across the deciding run in a 5-4 win against Liberty by means of a wild pitch, of all things. That came after freshman Jayda Coleman led off the seventh inning of the first game of Sunday’s doubleheader with a triple. It was a cruel fate for a pitching staff that gamely went after the Sooners, allowing no walks to an opponent that averages nearly four per game. The second game of the day? Oklahoma hit back-to-back-back home runs in the second inning, including Jocelyn Alo’s second of the day and NCAA-best 19th of the season, and cruised to a 16-0 win. Kinzie Hansen hit three home runs in the doubleheader, making her the third Oklahoma player in double digits (13) for the season.

4. Six runs. Two balls that left the infield. That’s a Baylor rally if there ever was one. And it was enough to leave No. 9 Arizona State out on its feet in the sixth inning of Sunday’s game in the desert. Baylor small-ball rally propelled it to a 7-2 win and potentially a season-defining road trip. After losing to the Sun Devils on Thursday, Baylor piled up 35 runs in four wins against Grand Canyon and Northern Illinois the next two days. But it was Sunday’s win that made the week. Down 2-1 entering the sixth, Baylor took the lead through two bunt singles, two walks and a hit batter, before Taylor Ellis and Maddison Kettler got a little more distance on hits to the outfield. After beginning the game at shortstop, Aliyah Binford threw five and 2/3 innings of shutout relief for the win.

5. It was clear LSU went back to study the tape of Tennessee pitcher Ashley Rogers and made the needed adjustments. The battle-tested Tigers jumped all over Rogers from the start, hitting her hard and chasing her from the game early to clinch the series with an 11-3 five-inning win in the rubber match. After Saturday’s games both went to eight innings, No. 10 LSU made sure it would head back home with time to spare. Georgia Clark put the Tigers ahead 3-0 in the first inning to set the tone and the Tigers led 11-0 by the third. Amanda Doyle and Shelbi Sunseri also homered for LSU.

6. Does James Madison have its next ace in Alissa Humphrey? She played the part Sunday by throwing a one-hitter and a no-hitter in back-to-back starts against Rhode Island. Success attracts success, and a lineage that includes past greats Jailyn Ford and Megan Good and current standout redshirt senior Odicci Alexander surely helped draw a top-100 recruit like Humphrey to campus. With Alexander out of the lineup Sunday, Humphrey struck out 12 and allowed just one hit in five innings in James Madison’s opening 11-1 win. Then she went back out and threw a no-hitter while striking out nine in a 20-0 win in the nightcap (which familiar face Kate Gordon paced with two home runs and five RBIs). In all this weekend, Humphrey went 3-0 and struck out 30 in 17 innings.

7. South Alabama’s Olivia Lackie is one of the game’s top young pitchers, and she demonstrated why yet again against Appalachian State. The freshman struck out a career-high 16 batters while tossing her first career no hitter in a 4-0 win to sweep the Sun Belt Conference series. Lackie’s no-hitter was the 18th in program history and the first since Alexis Reid threw one in 2018. The day before, Lackie struck out 15 in a one-hit complete-game win. She has five double-digit strikeout performances this season in eight starts.

8. We’ll stop writing about Braxton Burnside when the Arkansas shortstop stops hitting home runs. After going yard in the first inning of Sunday’s win in the series finale at South Carolina, Burnside is now tied for the second-best single-season total in Arkansas history with 15 home runs. We aren’t even to St. Patrick’s Day yet. Even that doesn’t capture just hot red-hot Burnside is at the moment. She has 13 home runs in the past 18 days. Those 13 home runs alone would tie for the fifth-best single-season total in program history. And she’s done it in a little more than two weeks. Sunday, she walked on eight pitches in the two at-bats immediately following her home run. She may see more of that.

9. Drexel’s Linda Rush had a day. Long established as one of the best mid-major players out there, Rush hit a home run and drove in three runs as Drexel opened its season with two wins Saturday against Coppin State. That was just her getting warmed up. Playing another doubleheader against Coppin State on Sunday, Rush collected three more home runs and 11 more RBIs. The fifth-year senior recorded just three outs all weekend. It’s going to be difficult for her to break her unbreakable program single-season record of 80 RBIs. But 14 RBIs in two days is a start.

10. Down to its final out, No. 21 Northwestern escaped with a 3-2 win against Ohio State to clinch the series and keep the Wildcats at the top of the Big Ten standings. Morgan Newport’s two-out triple in the top of the seventh was the big blow, making the Buckeyes pay the price for allowing runners to reach on an error and infield hit while trying to close out the win. Newport was a thorn in Ohio State’s side all weekend, driving in five runs in two wins. The Wildcats will reconvene to host Wisconsin at the end of the month (as always, Evanston spring weather willing).

11. Oregon freshman Alyssa Brito hit a walk-off grand slam in the sixth inning to propel the Ducks to an 8-0 victory over Sacramento State in their final preparation before Pac-12 Conference play begins. Oregon’s 16-1 start is tied for the second-best through 17 games in program history. Brito has seven home runs and 23 RBIs.

12. Gabbi Jenkins literally helped Indiana steal a victory from Rutgers to sweep the Big Ten Conference series. Trailing 5-4 in the bottom of the 10th inning, Jenkins swiped home when the catcher threw the ball back to the pitcher. She slid safely just under the tag. The Hoosiers won the game 6-5 on freshman Brooke Benson’s walk-off double in the 11th inning.