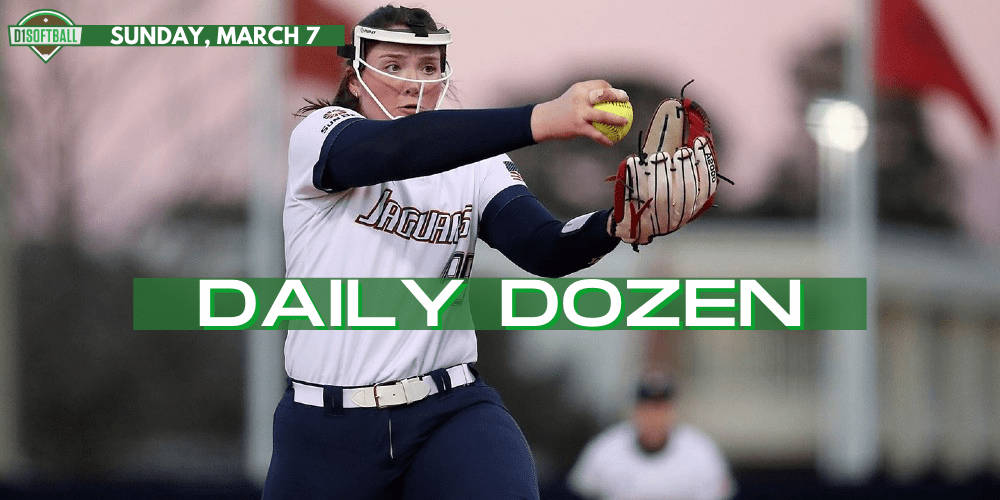 1. Olivia Lackie walked into Rhoads Stadium and showed no fear. The freshman threw a complete-game shutout as South Alabama upset No. 3 Alabama 1-0 and knocked the Tide (19-1) from the ranks of the unbeaten. It was the first victory over Alabama in program history for the Jaguars in 16 attempts. Lackie held the Tide lineup to only three hits while striking out six and walking none. South Alabama (10-7) got Lackie the only run she needed in the second inning when Meredith Keel singled to left field to score Janeah Finney. Montana Fouts was the hard-luck loser for Alabama. Fouts gave up six hits while striking out 12 and walking one.

2. Sam Russ did it again. For the second straight day, the redshirt junior hit a walk-off home run to lead North Carolina State to a victory over Georgia Tech. Russ hit a three-run home run in the bottom of the seventh inning as the Wolfpack beat the Yellowjackets 5-2 to clinch the four-game ACC series. On Saturday, Russ hit a solo shot to win the second game of the series. She has three walk-off home runs this season.

3. Guess what? Fa Leilua did it again too. The Mississippi State graduate senior hit a walk-off home run for the second straight day as the Bulldogs rallied to beat Western Kentucky 5-4. Trailing by a run with one out in the bottom of the seventh, Leilua launched a 3-1 pitch that cleared the scoreboard and sparked a wild celebration. “With Fa it’s not a matter of if she’s going to do it, it’s about when,” head coach Samantha Ricketts said. On Saturday, Leilua hit a walk-off home run in the bottom of the eighth to help MSU beat Alcorn State.

4. Nobody would blame Missouri if the Tigers had a case of whiplash. Missouri opened the final day of the Courtyard Marriott Tournament by hammering ULM 20-0 in five innings, with Cayla Kessinger and Riley Frizell each hitting two home runs. But Missouri quickly saw the tables turned against host Oklahoma. The Sooners beat Missouri 11-0 in five innings. Freshmen sensations Jayda Coleman and Tiare Jennings each hit two home runs for undefeated Oklahoma (16-0). Kinzie Hansen was 3 for 3 with a home run and four RBIs while Jocelyn Alo extended her hitting streak to 30 straight games. Shannon Saile threw a complete-game two-hitter with eight strikeouts and one walk to improve to 5-0.

5. Rachel Garcia made her season debut in the circle in No. 2 UCLA’s 14-0 win over San Jose State in five innings. The redshirt senior All-American had been sideline with a hamstring injury she suffered running the bases. Garcia struck out eight of the nine batters she faced across three perfect innings before giving way to Lexi Sosa to finish the game. Maya Brady also hit her first home run of the season, and got a pretty sweet endorsement from her uncle.

6. Kentucky will be undefeated when it opens SEC play at Florida next weekend, wrapping up a 19-0 start with wins Sunday against Coastal Carolina and Florida Atlantic. No one, even in Lexington, is going to say that record came against the most difficult schedule in the nation, but the fact remains that Kentucky joins Arizona, Oklahoma and Southern Illinois (!) as the only unbeaten teams with double-digit wins. The Wildcats are actually working on a 21-game winning streak dating back to last season, which brings us to Mallory Peyton. You may or may not remember that Peyton had a share of the lead among SEC players with 11 home runs when play stopped around this time a year ago. Entering Sunday, she was on the verge of matching her longest ever streak of games without a home run. Two home runs in the win against Coastal Carolina made sure that at least one Kentucky-related streak came to an end Sunday.

7. Arizona and USF were waged in an early battle to see how many runners they could strand on base until the Wildcats finally opened the floodgates in the fourth inning. With her Olympic coach watching from the opposite dugout, Dejah Mulipola belted two home runs to lead Arizona to an 8-0 win in five innings. USF ace Georgina Corrick took the loss, surrendering nine hits and four earned runs in 3.1 innings. It was the second straight day the Wildcats beat USF in five innings. Arizona is 12-0, with 10 of the wins coming by mercy rule. Up next on Arizona’s trip to Florida …

8. We’re still interested in Monday’s game between No. 4 Arizona and No. 19 UCF because Monday softball is bonus softball. But Kennesaw State took a bit of the punch out of the matchup by beating UCF in Sunday’s finale of a three-game series. Then again, perhaps with an eye toward the Monday spotlight, UCF started Grace Jewell on Sunday and kept both Alea White and Gianna Mancha largely in reserve (White threw 21 pitches at the end of the game). White ran into brief trouble in Saturday’s win against Kennesaw, but both primary pitchers were generally solid. All right, we talked ourselves back into it. Let’s play some Monday softball.

9. Haley Cruse piled up a lot of hits in her first four years at Oregon, but she never hit more than two home runs in any of those seasons. She has three home runs in the past eight days. And if you think these are sneaking over the fence on windy days, take a look at the hack below. It’s the evolution of a hitter.

10. Extended careers are part of the landscape in college softball this season, but the following tidbit will still make you pause. Bailey Lange was part of a high school state championship in 2011. Sunday, she led Wichita State to a 3-1 win against No. 23 Iowa State. Sunday was Iowa State’s first forgettable day of the season, marred by losses against both Missouri State and Wichita State. But it was memorable for Lange, who improved to 5-0 by limiting the Cyclones to five hits and one run in a complete game. An all-conference selection in 2018, she sat out most of her natural senior year with an injury, then saw most of her redshirt senior year wiped out by the pandemic. All of that while winning a South Dakota Class A state title when she was presumably in eighth grade in 2011. Sometimes it’s a long journey.

11. Come Sunday, there was nothing Mariah Mazon could do about how the weekend began. But she made sure it ended on a positive note. No. 23 Oregon State is going to lose that number attached to its name after three losses in the Colorado Classic. That included the wrong end of a 10-1 score against Colorado State on Friday in which Mazon allowed eight earned runs and 10 hits. But she closed the tournament with four hits, including a home run, and four RBIs at the plate and six innings of two-hit shutout work in the circle in a 15-0 win against Northern Colorado. Even with the nightmare outing, she still has a 1.79 ERA heading into next weekend and the first game of the season against Oregon.

12. Southern Illinois University is off to the best start in program history with a 14-0 record after two wins on Sunday. The Salukis have won 23 straight games dating back to last season, which ties for the longest win streak in program history.

BONUS: USF assistant Jessica Moore coached her final game for the Bulls on Sunday. The former Oregon star is moving to Denmark.