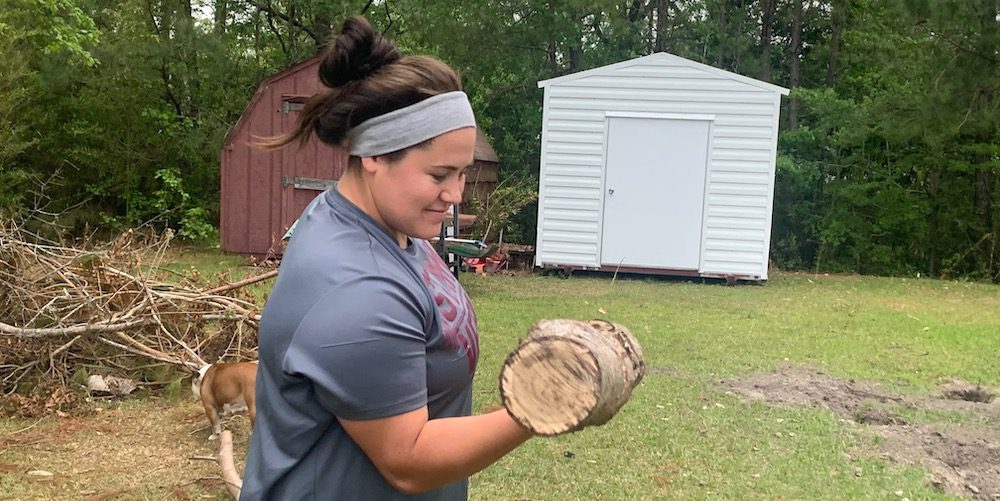 Montana Davidson was finishing her homework when she looked out the window to see her sister, Mia, with a chainsaw in her hands.

The Mississippi State sisters have been staying with their family at their grandfather’s house in Topsail Beach, N.C., during the coronavirus pandemic.

Without any gyms open or workout equipment accessible, they’ve had to get creative to try and stay in shape. Mia approached a tree stump in the yard and began sawing the wood into a barbell to use for arm curls.

“That is something Mia would do,” Montana laughed. “She was bored and figured out a way to make it work.”

Mia and Montana have relied on their natural surroundings to keep their bodies strong while under stay-at-home orders. They’ve carved out equipment that would normally be seen on World’s Strongest Man competitions.

The log workout idea was hatched when the sisters were cutting down pine and oak trees to clear the property of potential hazards during storms.

Mia realized some of the logs they had cut could be used like a squat bar.

“They are heavy enough to get a good workout in,” Mia said. “We went to Walmart and there were no weights because everyone had the same idea, so we figured why not just cut up some trees.”

The Paul Bunyan-esque methods seem fitting for Mia. The junior catcher regularly displays her power game and toughness behind the plate for the Bulldogs. Her 52 career home runs already stand as a career program record.

Although the sisters cut down several of the trees on their own with a chainsaw and hacksaw, they needed help from their dad for a few to avoid hitting any power lines.

“That almost happened twice,” Mia said. “I didn’t realize we were near it and we had to make sure to push it a certain way so it fell and didn’t touch the power line.”

Working outdoors is nothing new for the Davidsons, who are from Hillsborough, N.C. and whose parents both served in the Army. Their dad once cleared a large area of trees in their backyard to make room for a paintball field for the neighborhood kids.

“Growing up with my dad, he liked to do yard work and we learned pretty young how to do all that stuff,” said Montana, a redshirt junior infielder. “Especially if we wanted to make trails for our four-wheeler and stuff.”

The Davidsons have access to a nearby field in Topsail Beach, and have been able to practice throwing, hitting and catching. They do most of their strength workouts with the logs in the backyard to avoid any stares from neighbors.

Montana attempted to do yoga in the front yard and noticed cars slowing down to watch. For part of her cardio, she’s been running to a mailbox that she estimates is about 100 yards away.

“I would sprint and then walk back a few times,” Montana said. “The person whose mailbox that is probably thinks, ‘This girl is psycho. Stop sprinting to my mailbox.’”

The Davidsons are both kinesiology majors, so figuring out how to strengthen the body without using fancy equipment in a multi-million dollar weight room is a useful resource beyond just softball.

They will be performing another back-to-the-basics workout drill on Tuesday when they take part in the #428WallSitChallenge to honor the memory of former teammate Alex Wilcox.

“I have to stay strong and stay healthy and really just make sure I don’t lose anything until things get back to normal,” Mia said. “It’s really about making do with whatever you have, and we have trees and logs here.”