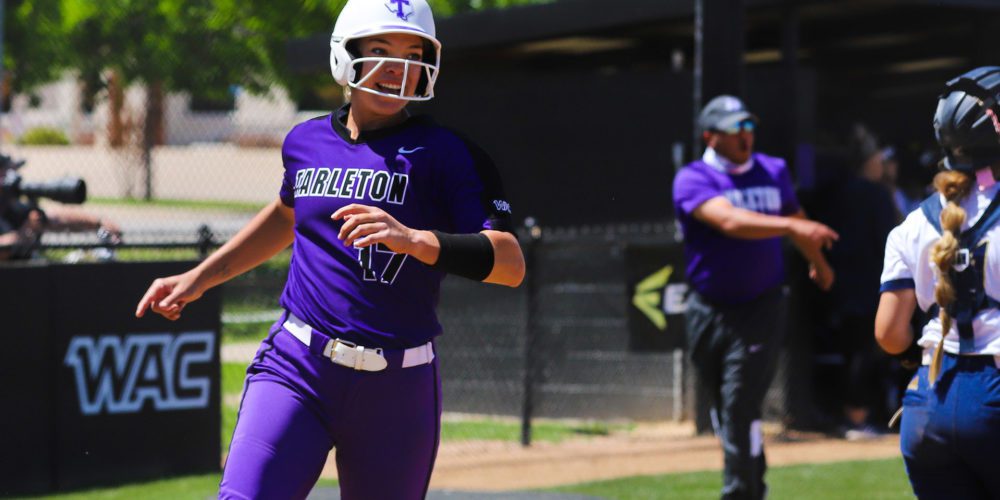 On Tarleton State’s third day playing games as a Division I program, the newcomer took the field against an Oklahoma team that would finish that 2021 season as the national champion.

For a time, it went all right. Tarleton loaded the bases in the top of the first inning. Everything seemed possible. Then the Sooners went to the bullpen, replacing the freshman who started the game in the circle. Only two more Tarleton batters reached base. In her final plate appearance that day, Georgia Capell stepped into the box against Giselle Juarez — the All-American who was in for an inning of relief as she worked her way back into form after an injury.

“I have never seen a curveball literally move so much,” Capell recalled. “I told myself I was just going to watch the first pitch, just to see what it does. It was just like ‘Oh my gosh.’”

She struck out swinging.

The stroke of a pen transformed Capell and her teammates from Division II into Division I players. It also made championship contenders one season into mercy-rule minnows the next. Changing divisions – changing the label – changed how people thought about them, for better and worse.

Scheduling different opponents didn’t change what the kinesiology major accomplished in the classroom, where she was a Division II First-Team Academic All-American not once but twice — the first two-time honoree in school history. It didn’t change her relationship with her family, the biggest reason she originally picked a school a little more than an hour from home.

In some ways, all that really changed when she became a Division I athlete was the amount of spin on the curveballs she faced. And for the record, plenty of players with extensive Division I accolades swung and missed at what Juarez threw their way.

We sort each other into any number of groups based on any number of characteristics because the labels make the world around us easier to process. They are useful shorthand, right up until we start thinking they are more than that. Right up until we start believing they define an individual, rather than giving us a clue as to where to begin understanding them. Where to begin learning.

With one final season to play, making use of her pandemic eligibility, Capell returned for a second swing at Division I. Through 40 games, the outfielder is hitting .388 with an .819 slugging percentage, 13 home runs and 40 RBIs. This past weekend, she hit three home runs, drove in seven runs and reached base in all six plate appearances against Sam Houston State.

“I try not to put pressure on myself,” Capell said. “But I guess [there is motivation] for self satisfaction that I do belong in Division I. I don’t want to be that person who they’re like ‘They moved up, and they’re just waiting for her to graduate so they can get Division I players.’

“I feel like I proved myself this year. I can hang with these bigger girls and hit alongside them.”

Finding a home at Tarleton

Even Tarleton coach Mark Cumpian acknowledges that Capell recruited the school as much as it recruited her. She was a very good high school player in Midlothian, Texas, a Dallas-Forth Worth exurb a little more than an hour from Tarleton’s campus in Stephenville, Texas. But there are a lot of good high school and travel ball players in Texas. She kept emailing Tarleton, where Cumpian was then an assistant, but never heard back. Until one day, she noticed Cumpian in Tarleton colors at a travel ball tournament. She hit a grand slam, the first she could ever recall hitting. Then she hit another home run.

He saw her again in another tournament not long after. She hit two more home runs.

Suddenly, Tarleton was vey interested. All the more after actually getting to know her.

Capell didn’t want to go to college far from home. That’s a bit of a problem in the Dallas area, where the absence of programs at TCU and SMU leaves one of the nation’s largest metro areas underserved at the Division I level with just North Texas and UT-Arlington. Capell’s family, like many, had exactly no experience navigating the recruiting process, but she heard from a few older friends that Tarleton was a good school. That was enough for her to set her sights on it. When the softball program finally caught on, she committed.

“I really wanted to go to a school where they knew my name instead of just being a number in the classroom,” Capell said. “A smaller school felt like a better fit. Tarleton’s not that small anymore, but I still feel like I’ve had a chance to make a name for myself.”

It didn’t take her long to do just that on the softball field. She was a third-team Division All-American as a freshman, when she hit 17 home runs and had a 1.271 OPS.

She was a second-team All-American the next season, increasing her home runs and OPS and setting single-season program records with 68 RBIs and an .822 slugging percentage.

That was also the year that she earned Academic All-American honors for the first time. But not for the last time.

“Sometimes in the summer, when I’m not taking summer class,” Capell allowed with no small degree of embarrassment, “I feel so weird not having work that sometimes I’ll be like ‘Man, I wish I had some homework to do.’

“You probably never hear a student say that.”

By 2020, both she and Tarleton were on top of the world. Ranked in the Division II Top 25, the Texans swept a doubleheader against the second-ranked team in the nation on March 6 and improved to 19-4. They believed they could win a national championship. But those were the last games they played in Division II, the remainder of the season wiped out by the pandemic.

Earlier in the 2019-20 academic year, Tarleton president James Hurley announced the school had accepted an invitation to join the Western Athletic Conference and move to Division I. While the move came as a surprise even to people like Capell, her gut reaction was excitement.

“Everyone wants to be a D1 athlete,” she allowed.

The move certainly brought real, tangible benefits. It meant an increase from 7.2 scholarships in Division II to 11 in 2021 and fully-funded status with 12 scholarships this season. It meant a new turf field this season, as well as locker room renovations with more creature comforts.

Instead of title aspirations, it also brought some long days at the field. Cumpian contends last year’s schedule helped far more than it hurt in the long run, but the short run meant playing not only Oklahoma that first weekend on the field but also Oklahoma State. Tarleton also played Texas and Baylor twice each, as well as a three-game series against Texas Tech (which netted the program’s first Power 5 win but also a 23-0 defeat). They finished 17-36, more losses than Capell suffered in her three seasons in Division II combined.

“Sometimes when you get beat so much,” Capell said, “You lose sight of the fun.”

Capell finished the 2021 season hitting .276 with eight home runs and a .506 slugging percentage. By almost any standard, that’s a successful season for a hitter, especially a hitter facing better competition. A good season in Division I for a Division II player, you might say.

“More people are going to do their homework on you from video and all that stuff. They really broke her down.

A final chapter and a point to prove

That outcome didn’t sit well with Capell. She wasn’t satisfied with being good enough. Typically a bit of a slow starter in the fall, according to her coach, she instead came out on fire this past autumn. If it crossed her mind on a given day that she might not need extra swings, or that she could do something else with the time, she reminded herself that she only had one more season on the field. She didn’t have a say on when the story ended, but the final chapter was hers to write.

Tarleton has looked more at ease in its Division I surroundings this season. The schedule has been more forgiving. A number of transfers with Division I experience replenished the roster. Although not eligible for the postseason as it reclassifies, the Texans are 23-17 record overall and 8-7 in the WAC.

But no one has a bigger hand in the success than Capell.

It’s a long way from standing in the box against Juarez more than a year ago.

“I feel like I was a little intimidated,” Capell recalled of that moment in 2021. “But you can’t be scared. You’ve just got to go out there and play. That’s what I feel like I did differently this year.

“You just go in there and trust the work that you’ve done.”

A label is a starting point. It’s not the full story.