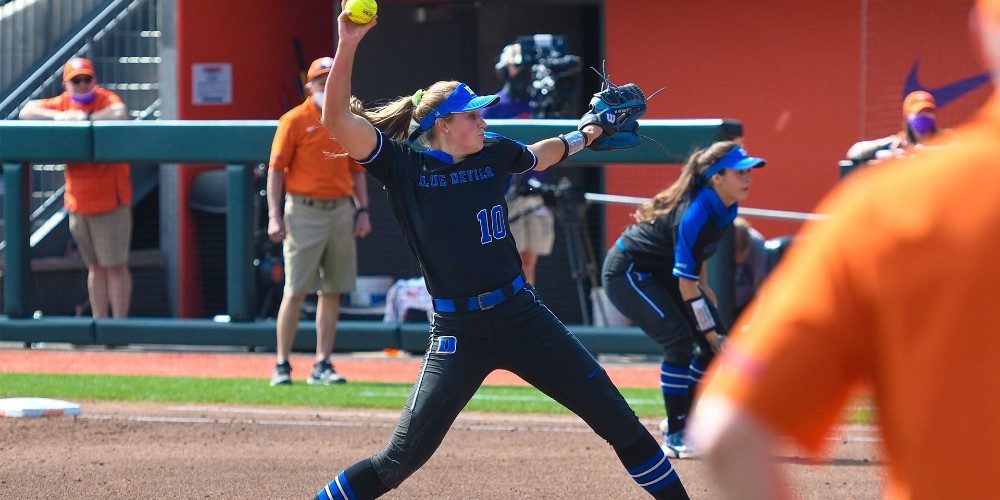 Duke’s St. George Tricks Out Some Orthotics For a Special Blue Devils Fan

Shaylee Boger was disappointed when she saw the color choices for her orthotic leg braces. They only came in black or beige, and Boger wanted something more vibrant that fit her personality.

She sent St. George a message asking if she could do the same for Boger’s orthotics, and St. George eagerly accepted.

“I was looking for a way to bring some fun into them and have some fun colors,” Boger said. “I told her I just wanted something creative. I gave her my favorite colors and said, ‘Have fun.’ I have no idea what the heck I am getting.”

Boger, 20, has the adult-onset form of Pompe disease, a rare genetic condition. Patients with Pompe disease have an enzyme deficiency that leads to the accumulation of the complex sugar glycogen in the skeletal and heart muscles, which causes muscle weakness and trouble breathing.

The Texas native first connected with the Duke softball program after sitting next to head coach Marissa Young on a flight. Boger makes regular trips to Duke every six months for medical appointments.

Young invited Boger to meet the team in 2018, and Boger has remained a big fan of the Blue Devils.

St. George was honored when Boger asked if she would paint her leg orthotics.

“It was something that I absolutely loved to do for her. I had only done shoes before, so it was a really unique experience,” St. George said. “Hopefully other people see that and they may want me to paint theirs as well. Maybe I can start a little expansion.”

St. George decided to return to Duke for a fifth year, using the extra year of eligibility the NCAA granted from the Covid-shortened 2020 season.

The Virginia native was already leaning that way when Young told her Athletes Unlimited had asked about including St. George in this year’s college draft.

“Even though it would have been really cool, I want to play in college for one more year and kind of put everything into perspective,” said St. George, a member of Duke’s inaugural team. “I am not ready to leave Duke when it comes down to it, and I am not ready to leave the girls coming off an ACC championship.”

The extended stay in college enabled St. George to enroll in a one-year master’s program in Duke’s Fuqua School of Business. She started taking classes in July.

“It was always something I was interested in. The chance to know I could go there and still play was an opportunity I couldn’t pass up,” said St. George, who earned her bachelor’s degree in psychology. “It’s really been challenging to go through and really pushed me out of my comfort zone. But it will be worth it at the end of the day when I have another degree and hopefully another ring.”

St. George had some practical business experience before she began her master’s studies. During the Covid shutdown, St. George, her Duke teammates Raine Wilson, Rachel Crabtree and Emilie Cieslak and Holy Cross’s Hannah Horton launched the clothing brand, Women In The Arena, based on Theodore Roosevelt’s Man in the Arena speech.

“It was something we wanted to do to build confidence in younger girls but also provide self-reinforcement within us,” St. George said. “If we are preaching the message to younger girls, we have to be that way as well. It was really about empowerment and confidence. It’s wearable courage to spread the message.”

The company was created before Name, Image and Likeness legislation was passed, so the players couldn’t market themselves as Division I athletes. Although they have paused the sale of merchandise, St. George is trying to take advantage of other NIL financial opportunities.

“I haven’t had any really big softball deals. It’s more just companies asking if I could make a Tik Tok for them about something,” St. George said. “I have messaged people here and there to see what might be possible.”

St. George’s Trick Out My Kicks side hustle remains more of a passion play than a money-making endeavor. She came up with the idea after taking an art entrepreneurship class at Duke.

“It’s been really cool to reach a lot of people and learn more about their stories and help them express themselves,” St. George said. “I think of it more as a hobby with nothing really attached to it. I like having the freedom to do it on my own time and keep it pretty casual.”

A junior at Trinity College in Hartford, Conn., Boger hails from the small town of Dickens, Texas, where her graduating class in high school had five students.

Boger’s family became aware something was wrong with her medically when she started playing for her school’s sixth grade basketball team.

“I was going up and down the court and within the span of a year I couldn’t do it without falling,” Boger said. “After they diagnosed me, the doctors advised me not to play sports. But I still got involved in a different way by being a basketball manager for my high school and managing track and cross country.”

Boger was supposed to attend the 2020 Tokyo Olympics through the Make-A-Wish Foundation, but “then Covid happened, so I was stuck in Texas,” she said. “That was very disappointing because I was really looking forward to it. But I am hoping to volunteer in L.A. in 2028. I volunteer at a lot of marathons, and I am hoping that may open some doors to help in L.A.”

Having followed Duke softball since the very start, Boger feels a special connection with the program. Her custom-painted orthotics will only solidify the bond even more. They not only represent her personality, but the unabashed strength it takes to make each day her best.

“I am like the biggest supporter of Duke softball on and off the field,” Boger said. “I think all the players and coaches are great, and I am really grateful Peyton wanted to do this for me.”