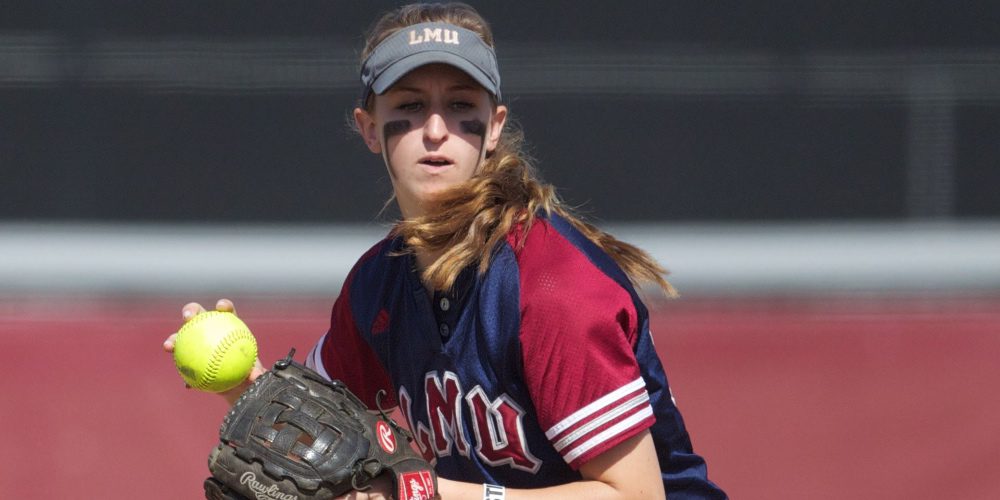 Sam Fischer was caught off guard when former Saint Mary’s head coach Jessica Rodgers approached her on the field.

Fischer was playing in one of her last games for Loyola Marymount University in 2012 and wasn’t thinking much about the bigger picture.

“She thanked me for everything I had done for the conference. That was pretty cool,” Fischer said. “I didn’t understand it at the time because I was focused on my college career being over. But I still have forgotten that.”

Fischer didn’t attend LMU to become a symbol of mid-major success. She attended LMU because that is where she felt most comfortable.

An overlooked recruit coming out of Simi Valley, Calif., Fischer didn’t have any offers from the blue-blood programs, and only one offer from a program in a Power 5 conference.

But Fischer isn’t sure how much different her decision would have been even if the bigger schools pursued her. She wanted to stay close to home in Southern California, have a chance to play as a freshman and attend a school with smaller class sizes.

Fischer had her jersey retired and was inducted into the LMU Athletic Hall of Fame last year.

“If I advocate for anything, it’s finding the right fit and going where is best for you,” said Fischer, who earned a spot on the USA Softball National team in 2012. “For me, that was a small school college and mid-major program. It’s not the same for everyone, and that is fine. It’s what is best for the individual.”

Fischer watched with great pride last week when LMU upset LSU and Michigan at the Judi Garman Classic. She knows how much victories like those mean to everyone involved at a program like LMU.

“Some decisions are being made based on stuff that shouldn’t matter as much,” Fischer said. “There are so many different reasons for kids choosing these schools that might not be what is true to them. They see them on TV the most or winning national championships and think they need to go there. I think we have lost a lot of knowing yourself and knowing of our wants and needs.”

Although it’s only been eight years since she was on a college diamond, Fischer realizes times have changed enough to make the college recruiting process even more convoluted.

“In the age of technology, everyone is talking about things on social media and kids see everybody else doing it and what they have and that puts a lot of pressure on these kids,” Fischer said. “They feel they need to do the same and go to those big schools even if it’s not the right place for them.”

Fischer graduated high school as a Harry Potter-loving shortstop with a quirky personality. She was as competitive as anyone between the lines, but needed to play loose to balance her inner drive.

“I remember my dad telling me when I was being considered for the USA Softball team that maybe I should try to be a little bit more serious,” Fischer said. “But dang, I didn’t want to have to do that. I take the sport seriously and work extremely hard, but I need to be me.”

Playing at LMU enabled Fischer’s parents to attend games. Her dad, Rick, watched 208 of her 214 career games in person, and even her mom, who Fischer emphasizes “is not a sports person,” made it to 100 games.

Fischer would drive home on Friday nights before LMU played a weekend home series, so she could drive to the field with her dad on game days.

Her dad always brought her chocolate milk and a chocolate doughnut before home games, which would make some nutrition staffers cringe in horror.

“That doesn’t happen anywhere,” Fischer said. “Every coach has their own thing, but some schools don’t even let you go talk to your parents very long after games. Our program was a bit more lenient and that mattered to me. I needed those car rides home with my dad.”

Once Fischer joined Team USA, her college affiliation was an anomaly among the other players. It got her some media attention, but made her feel like she had to justify why she chose LMU.

“I had to really work to understand that. Should I have been embarrassed? Did I make the wrong decision?” Fischer said. “I had to shift my thinking. I went to LMU because it was perfect for me. It was my dream school.”

Fischer doesn’t want to discourage girls from dreaming about playing at the bigger programs in the SEC or Pac-12. But she doesn’t want them to feel like failures if they don’t want to play there either.

“Not every player has the talent or ability to play at a Division I national championship school,” she said. “It is just about embracing who you are instead of spending four years riding the bench or feeling not worthy or not good enough instead of thriving.”

The 2020 season has already shown an increased parity across the sport. Smaller schools are beating preeminent powers more often, and the rankings have resembled an EKG during a stress test.

Fischer enjoys seeing more talent spread around at all levels. She will champion mid-majors as much as possible, but more importantly, she will champion finding a program that makes a player happy and allows her to reach her full potential on and off the field.

“I got to be myself at LMU and grow in a place that wanted me to grow as me and accepted me for me without trying to change things,” Fischer said. “I was at a school that actually got me.”