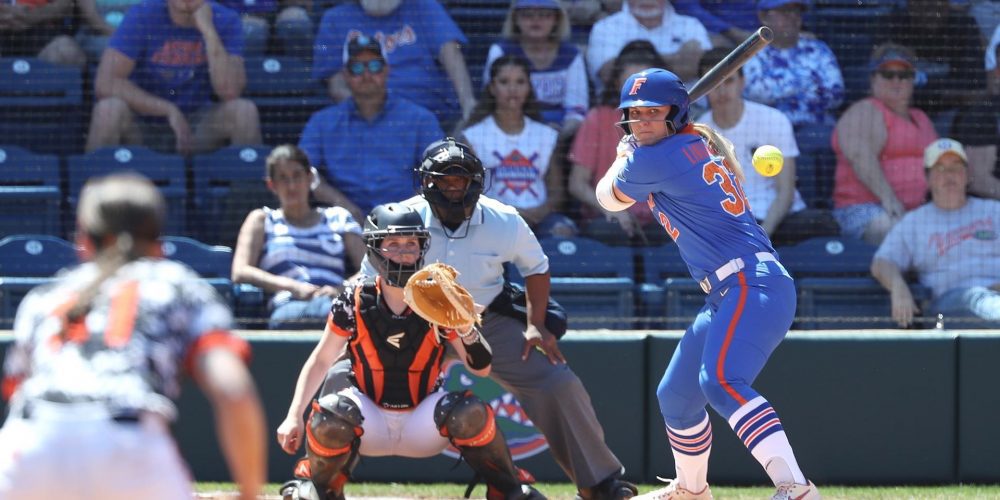 The preseason interview with a local Gainesville radio station was convivial but conventional. In his answers, Florida coach Tim Walton set up the season in a positive but measured manner.

At least until the subject turned to Kendyl Lindaman, a graduate student about to begin her third season with the Gators. In that moment, Walton shifted from diplomat to revival preacher.

“Kendyl Lindaman is the best right-handed hitter I’ve ever coached,” Walton told the host. “Oh man, there’s no question. She’s the best. … I’ve never seen anybody — she can square up all kinds. She’s a professional.”

Walton isn’t a carnival barker. He lobbies for his players and his program. But a firehose of hyperbole? Not so much. And the coaching tenure he referenced spanned, among other right-handed hitters, Megan Bush, Francesca Enea, Lauren Haeger and Aja Paculba.

He didn’t hesitate or walk it back. The best right-handed hitter ever to come through Gainesville.

That’s a lot of potential side-eye, even in jest, that he invited at the next alumni gathering.

There’s no reason to doubt that Walton meant what he said. But perhaps what he said also meant something more.

She was even in a hurry to get her degree once she got to Gainesville.

She seized every chance that came her way to show that she measured up. So when Walton called her the best right-handed hitter in program history, perhaps the real message — one that matters more than rankings — is that she can stop trying to measure up. She instead set a standard that those who follow will be hard-pressed to match.

“It’s one thing to hit for power, but to be able to hit the ball over the whole entire field — she’s a spray hitter, she’s not a pull hitter,” Walton said. “But she’s also got the IQ that allows her to cheat and to do things and to prepare. She loves softball. She’s passionate about things.”

A SPECIAL KIND OF HITTER

It’s still difficult to argue with the praise.

Entering this week’s regional against Baylor, South Alabama and opening opponent South Florida, Lindaman has a .339 batting average in her seasons with the Gators. That’s .001 behind Paculba and ahead of the rest of the aforementioned right-handed hitters (who all played four seasons). Again using only her Florida numbers, she is also right there with the program legends in slugging percentage and on-base percentage.

Add her numbers from two seasons at Minnesota and she is comfortably on top.

Walton said two names came to mind when thinking about comparable right-handed hitters. One is Stacey Porter, the Australian Olympian who is certainly familiar to fans of international softball but perhaps less so to college softball fans (though she played at Hawaii). The other has the same first name and is instantly recognizable to all softball fans: Stacey Nuveman.

“It’s very rare that you have a right handed hitter who can do what Kendyl can do,” Walton continued. “She’s not getting infield base hits. Every hit she gets she earns.  She’s a power hitter that hits for average and can drive in runs with a high on-base percentage but a low strikeout rate. That’s a very rare thing to see.”

Lindaman isn’t actually the best practitioner of that particular skill for the Gators this season (which helps explain why the Gators are the No. 4 national seed). While she pairs a .459 on-base percentage with 35 RBIs and 75 total bases, Charla Echols edges her in all three categories and has struck out just twice in nearly 200 plate appearances. But even a fellow maestro like Echols recognizes something special about Lindaman. Especially a fellow maestro.

“I think we all see it, she has a really good presence about herself,” Echols said this week. “Stuff that you guys can’t see, Kendyl breaks down pitchers the best that I’ve ever seen a player be able to do it. She sees a lot of stuff that even I can’t see when I’m up to bat. Her being able to come back and tell us that stuff really is helping our whole lineup. Having Kendyl is a lot more than just her bat.”

CHARTING HER OWN COURSE

It is, of course, part of the story that someone who has that impact on a program as elite as Florida was available for any and all comers in the recruiting wars. Like more than a few players from Iowa, notably former Missouri ace and USSSA Pride pitcher Chelsea Thomas, Lindaman suffered from a high school schedule out of sync with the rest of the country.

“In high school I really didn’t understand the extent to which I was overlooked until I got to college,” Lindaman said. “I felt it even more getting to Florida and getting to this level of softball.

“I do understand how it happens. We play high school softball in the summer [in Iowa], so we do miss a lot of those exposure tournaments.  That was the risk that I took — and everything did work out in my favor. But there were a lot of people who overlooked me, a kid from Iowa.”

She wasted no time proving she belonged in the Big Ten. She hit .426 with a staggering 1.497 OPS as a freshman. Her .899 slugging percentage was the fifth-best mark by any player in Big Ten history, freshman or otherwise. She nearly duplicated those numbers as a sophomore. It was certainly reasonable to think she would maintain at least an .850 slugging percentage for her career, something only eight players in NCAA history managed. She could have been a very big fish in a not-at-all-inconsequential pond in a Power 5 conference.

But not the biggest pond. And part of her needed to show she could swim in those waters.

It seemed that not everyone agreed.

“As much as you don’t want to listen to social media and all the things they’re saying when you leave, I knew I could play at this level,” Lindaman said. “But there were a lot of people that wanted to see me fail. It was hard not looking at it. It bothered me a little but not a lot. I wanted to compete at this level, I wanted to compete for a national championship. I wanted to do all these things and Florida was the best place to put me in that position.”

She did all those things she wanted to do, piling up massive numbers and reaching the World Series with Florida in 2019 (her former Minnesota teammates also reached Oklahoma City that season). Still, one of the best measures of that inner desire to prove herself comes from what she did off the field at Florida. As with many transfers, Lindaman lost some of her credits and some of her progress toward a degree when she changed schools. Even last year, as a true senior, she was in classes with freshman teammates — crossing requirements off the checklist.

Yet she contends she never considered taking an extra year or even an extra semester to finish. More than that, she acted to make sure she didn’t need to do that. She took 18 credits her first semester in Gainesville, more than at any time before. And we’re not talking about someone who is just skating by in school. She’s also an Academic All-American.

A GATOR FOR THE AGES

Take a look at a Florida team that has a run of late-inning heroics and also just broke the program record with a 3.66 GPA during the spring semester, and it’s hard not see the imprint of someone who never met a challenge she couldn’t conquer — on the field or in the classroom.

“She brings a different kind of confidence and composure that keeps a lot of us calm in those pressure situations,” Echols said. “I think Kendyl is a really genuine kind of person. She’s going to tell you how it is, but she’s going to tell you in the most respectful way that you can take it. She wants the best for everybody in that locker room and we all know it. So when she says stuff to us, you really listen to what she has to say.”

The best right-handed hitter in the history of one of college softball’s signature programs. No one is more qualified to make that judgment than Walton, so let’s take his word for it.

But perhaps that wasn’t really his point. On the eve of the extra season that Lidnman gained with the NCAA decision on eligibility during the pandemic, perhaps her coach wanted to make it clear that she had nothing left to prove. Just being Kendyl Lindman was plenty.