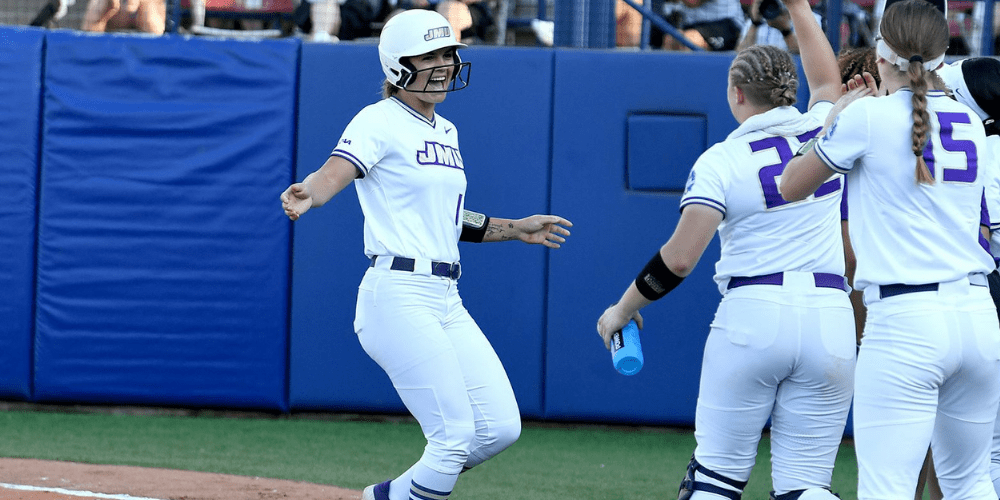 Kate Gordon’s clients understood why she needed to refer them to a coworker. In a hot real estate market where even instant responses can be too late, Gordon couldn’t just drop everything to show a house. She had a few other things going on, like playing in the Women’s College World Series.

Gordon was an integral part of JMU’s history-making run to Oklahoma City. Riding Odicci Alexander’s inspiring performances and the mid-major program’s competitive grit, JMU made its first trip to the WCWS a memorable one.

The Dukes captured the nation’s attention by becoming the first unseeded team to win its first two games in the WCWS and reaching the semifinals.

“It still feels like a dream because when I was younger I would sit in the living room with my family and watch the World Series on TV and want to be playing there,” Gordon said. “That is what you do when you are growing up and to finally make it was amazing.”

Gordon expected to be done with softball by 2021. The All-American outfielder began interviewing for jobs before the 2020 season, and accepted a position at Old Dominion Realty while JMU was playing in a tournament in Florida.

After the 2020 season was cut short, Gordon wondered whether the employment offer would still stand if she decided to return to JMU for an extra season of eligibility.

“Thankfully, my boss and co-workers used to play college sports so they know what it’s like,” Gordon said. “It’s like a family up there and they told me not to stress about it and they will always be there. They said just go and play softball.”

She got her real estate license last summer and worked throughout the pandemic. She took nine course credits at JMU to remain eligible while still helping clients during the winter and spring.

“I just limited my hours when I could around practice and classes,” said Gordon, who received a bachelor’s of science in hospitality management with a minor in general business. “The time management skills you learn being a college athlete are really valuable. I just replaced some of the things I had been doing with work.”

Given the state of the real estate market right now, Gordon was grateful her co-workers could help some of her clients see houses while she was on the field. They knew she wasn’t lying to get out of work because she was on national TV every weekend with sky-high ratings showcasing the sport’s popularity.

“The market is insane right now. I have a lot of first-time home buyers who are either people I went to high school with or college with. It’s just nuts for them to compete,” Gordon said. “You literally have to get there before it’s listed to have a chance.”

Persistence amid all challenges is a character trait Gordon developed in sports.

She entered the WCWS in a prolonged slump. Gordon was 2 for 21 in NCAA play, including 0 for 10 in the super regional against Missouri.

“It came at the worst time, but I told my teammates in Missouri that I was going to cheer the best I can, play defense the best I can behind y’all and you can just pick me up hitting.’ They did,” said Gordon. “They said, ‘we got you. We are a team. We pick each other up.’ And I knew they would.”

Despite the drought, Gordon didn’t get timid at the plate. She’s always tried to “swing myself out of slumps” and she was rewarded in OKC.

She connected on the game-winning home run in the top of the eighth inning as JMU upset No. 1 Oklahoma in the opening game of the WCWS.

“I was supposed to bunt if Michelle (Sullivan) got on base. I was thinking that I don’t know if I have ever bunted in my whole life, maybe like four times. But I was ready to get the bunt down if we needed it,” Gordon said. “But once I swung away and hit it, I honestly thought it was still in the park and just prayed it wasn’t a pop up. It felt great once it went out.”’

Gordon and the team’s six other seniors soaked in every possible second of their WCWS run. They never lost focus on the field, but didn’t want to be so business-like that they missed out on moments that were happening in real time around them.

“We just all decided to play for each other this whole year and were grateful to have another season because we weren’t sure with Covid,” Gordon said. “It was just exciting to see everyone reach their dream and see the kids we impacted. I even had a little boy’s parents come up to me and say my kids flex now because of (Lynsey) Meeks and my kids pull the bat back behind their shoulder before they hit because you did that and people saying their kids were pitching into walls because of Odicci. It’s so cool to know we impacted so many people outside of JMU.”

Gordon wanted to get some added value out of her appearance at the WCWS while the run was still fresh in everyone’s mind.

She approached the graphic designer at Old Dominion Realty about creating a clever softball-related advertisement to market her real estate skills.

The “I can get you home” ad that has elicited a lot of positive response.

“He sent me that ad in a day and it was awesome,” said Gordon, a WCWS all-tournament selection. “There were a bunch of people sharing it on social media, so hopefully the word is getting out there.”

Gordon turned down offers to play overseas to focus on her real estate career. She is getting married in November and working to fix up the house she purchased.

Like she’s always done in softball, she has set goals for herself in real estate. She may consider returning to the field to coach or work camps in the future.

But for now, she just plans to be in the stands next season watching her brother, Tristan, in baseball at Bridgewater College and her sister, Maddie, in softball at Penn State.

“I can’t wait to be on the other side cheering them on and being the crazy sister,” Gordon said with a laugh. “I had so many great experiences in my college career, and it will be fun to watch them do the same.”

Great article. I love how she worked her business career with her softball career, especially with the ad she created. it is hard to adjust to a post softball career, but it seems like she is able to move on.

I was looking your website d1softball.com and find a useful Post at https://d1softball.com/from-home-runs-to-home-ownership-kate-gordon-had-it-covered/. Similarly I can write an informative article along with url that will add significant value to your audience(visitors). I WILL PAY you for putting(Publish) this content on your website as well.
Please let me know possible options with Price.
Cheers