Ron Norick started hauling ice and drinks around the Women’s College World Series back when the locker rooms were just tents located outside the baseline fences. The players sat in folding chairs and ice chests were filled with water and Gatorade.

More than two decades later, Norick’s job is essentially the same. It’s the dynamics around him that have greatly changed.

Norick, 78, has been volunteering at the WCWS for 25 years, and convinced his good friend, Gary Marrs, 73, to join the crew more than 12 years ago.

They are responsible for stocking the locker rooms with drinks and snacks between games to help keep the players hydrated and nourished.

Many fans, players and coaches have no idea about the prominent positions Norick and Marrs once held, and they like it that way.

Both were in their positions during the bombing of the Alfred P. Murrah Federal Building on April 19, 1995, and both provided strong leadership during the rescue and recovery efforts.

Public service is in their blood, and their more anonymous roles at the WCWS provide them great pleasure as a way to continue giving back.

“We are just one of the grunts is all we are,” Norick said. “We are nothing special. We just do our job and enjoy volunteering.”

Norick and Marrs would normally be spending 12-15 hours a day at the field this week. They would arrive two hours before the crowds started filtering in and stay until the last game was over every night.

But the coronavirus pandemic forced the cancellation of the WCWS, meaning Norick and Marrs got an unwanted year off from manual labor.

“I always put that on my calendar and make sure I am going to be there,” Norick said. “I am disappointed like everybody else. I feel sorry for the girls and the teams that don’t get to come this year. They will be missing that experience.”

Marrs developed a love for softball while coaching his daughter from grade school through high school. Being able to volunteer for the sport’s biggest event was something he couldn’t resist once he had time.

“Softball was pretty special to me anyway, so I really enjoy being there and helping in any way I can,” Marrs said. “These are huge games and these girls play softball like you wouldn’t believe.” 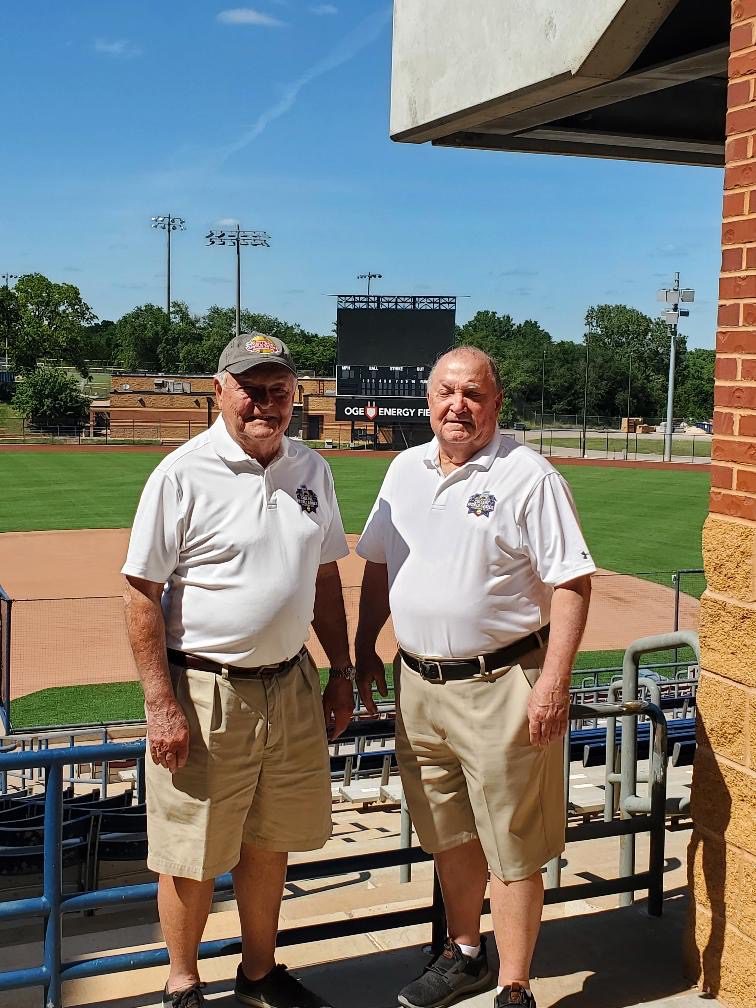 Norick got a taste of fastpitch softball while playing in an industrial league when he was younger. He marvels at the talent on the field during the WCWS.

“These ladies that play on these teams are just phenomenal athletes and really competitive and fun to watch,” Norick said. “It’s been long enough now for me that I have watched some of the mothers of the girls playing out there today. I have seen a lot of players come through.”

Given their longevity at the WCWS, Norick and Marrs don’t have to be given work orders. They know exactly what to do.

They make sure the locker rooms – which now feature refrigerated coolers instead of ice chests – are always stocked with drinks, fruit and other snacks, and deliver the umpires their meals.

Between their re-stocking shifts, Norick and Marrs can often catch a glimpse of the games taking place.

“It’s fun to watch the girls in the dugout. They have their chants and their routines and their rally caps,” Norick said. “You can tell they just have fun. We are around them quite a bit passing in the halls as we are doing our stuff and they are always very friendly and polite. It’s just enjoyable.”

Marrs and Norick take great pride in seeing how much the WCWS has grown in OKC in the last three decades and how much attention it brings to softball.

“A few years ago we were selling drinks out of an ice chest and the snacks was a hot dog and bag of chips,” Marrs said. “It’s really been something to see how much it has progressed.”

The event is about more than just the performances on the field for Norick and Marrs. They enjoy interacting with all the fans that make the annual pilgrimage to OKC to experience the atmosphere.

“You get people coming in every year even if their team is not here. They come just to watch the series,” Marrs said. “You see the same people in the same motorhomes and same tents set up. The license plates are from all different states. It’s like a welcome back every year.”

Sadly, the reunion won’t happen this year. Softball has been crossed off Norick’s calendar.

Although they would rather be at Hall of Fame Stadium, Norick and Marrs will still be together this weekend. Norick’s son races sprint cars, and will be competing in an event. They will be there for support.

They are eager to return to the WCWS next year and for years to come. Marrs likes to joke that they will eventually be lugging ice around in wheelchairs.

“As long as Gary and I are healthy, we will be there,” Norick said. “I am sure there will come a point when we finally have to say we can’t do it anymore. But right now, it’s not a problem for either one of us. We still love doing it.”