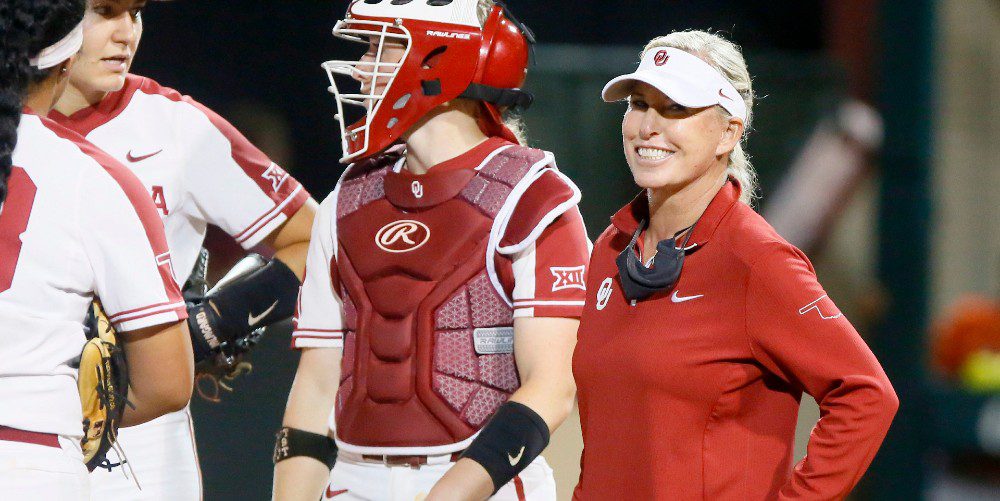 As a young girl growing up in Southern California, Patty Gasso used to listen to Vin Scully calling Dodgers games on her transistor radio.

Gasso would close her eyes and visualize the game in her mind. She would try to learn about  the strategy behind certain calls and the intricacies involved in different plays.

Most nights, Gasso would be joined by her mother. They would absorb Scully’s words like poetry, revealing in every victory and commiserating in every defeat.

“That is what bonded me and my mom,” Gasso said. “We were very atypical and more like a father and son with sports teams. We were a mother and daughter that just loved sports and we would watch it and listen to it together every time we could.”

Gasso will be fulfilling a childhood dream on Wednesday night when the Torrance, Calif. native throws out the first pitch before the Dodgers play the Houston Astros at Dodger Stadium.

Fresh off leading Oklahoma to the program’s fifth Women’s College World Series title, Gasso will be stepping onto the field of the defending Major League Baseball World Series champions.

“She called me not long ago and said, ‘I have a big surprise for you.’ I never thought it was this,” said Gasso, a Torrance, Calif., native who played at El Camino Junior College and Long Beach State. “I was very hesitant at first. But sometimes you only get one opportunity for a once-in-a-lifetime moment and this might be it, so I am doing it.”

The opportunity will be a tad bittersweet for Gasso.

She wants to share the memory with her mother, Janet Froehlich, but Froehlich suffers from Alzheimer’s disease.

Froehlich raised Gasso and her two siblings with very little money. She worked full time and took out loans to help put them through private school.

Regardless of their circumstances, Froehlich always encouraged her children to play sports. The three would race to the park across the street from their house after school, and Froehlich would join them once she got home from her job as a secretary.

Froehlich was a great athlete in her own right, but didn’t have many opportunities to participate in sports in the era before Title IX was implemented and paved the way for Gasso to excel as a player and a coach.

“I saw my mom go through a lot of struggles without ever complaining,” Gasso said. “I knew she was struggling, but she never complained and she just did it. You just do what you have to do for your kids. Nothing was ever given to her and she never expected anything to be owed to her. That was not how it worked.”

Gasso has been on the road recruiting the last few weeks and hasn’t had much time to prepare for throwing out the first pitch.

“I would rather be sitting behind home plate than standing on the mound looking like a fool trying to throw something that will potentially bounce 10 times before it gets to the catcher,” Gasso said with a laugh. “We will see how it goes.”

No matter if it’s a strike or a ball, Gasso plans to savor the experience. She expects to have flashbacks to her childhood as she enters the stadium, and possibly hear Scully’s voice providing the narration in her head.

The full-circle memory may not be as vivid to her mom, but the bond they developed with the Dodgers provided inspiration for Gasso to achieve unimaginable dreams on the diamond.

“It’s really hard to see her the way she is now. It takes a toll on everyone in the family,” Gasso said. “But we will always have those moments spent together. Nothing can ever take those away from me and my mom.”