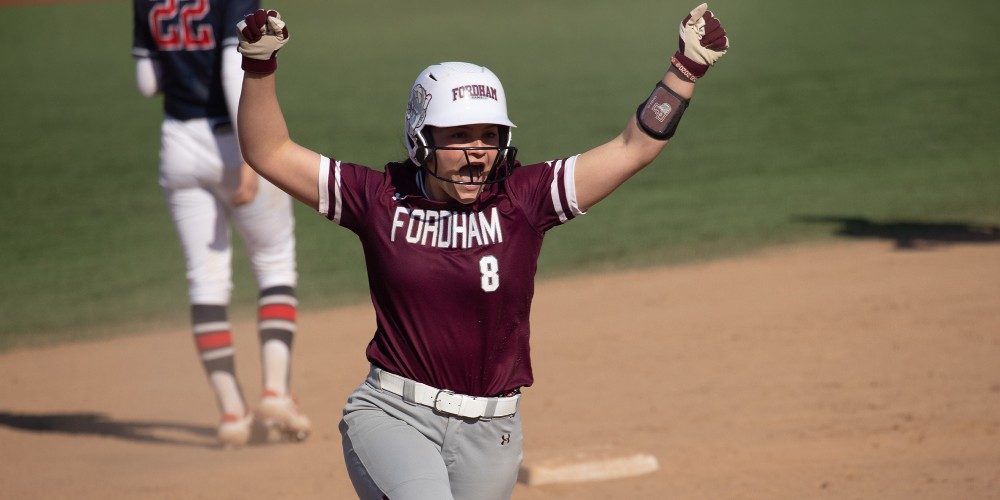 Sarah Taffet begrudgingly grabbed the red bag and began walking toward the field.

Fordham assistant athletic trainer Bridget Ward had arrived at Branch Brook Park in Newark, N.J., ahead of the team bus and needed help carrying her equipment to the dugout.

Taffet started complaining about why the Rams needed to bring so many extra bags for a fall game in early October.

A few hours later, the device inside the red bag Taffet was carrying would end up saving her life.

Taffet’s heart stopped during a game against Villanova. The quick thinking of medical personnel in attendance and an automated external defibrillator (AED) prevented Taffet from likely dying.

Three months later, the confluence of events that aligned to prevent a tragic ending still leave everyone involved shaking their heads.

“The things that had to happen for my kid to still be breathing today, it’s just unfathomable,” said Sarah’s father, Paul Taffet. “It is truly mind-blowing to think about.”

Even before the medical emergency, it was set to be an emotional day for Taffet.

The New Jersey native was returning to play at the field of her former club team, the New Jersey Pride, and a lot of her old coaches and their families were there to cheer her on.

But the mood turned somber in an instant.

Taffet hit the ball to first base in the second inning and was tagged out, causing her to fall down. It was a hard tag, but nothing that would be considered dirty.

Taffet popped right back up and began jogging to the dugout. Suddenly, she started gasping for air and thought she got the wind knocked out of her. She remembers everything going black and losing all function in her body as she collapsed to the ground.

Ward was sitting on a ball bucket in the dugout and keeping a close eye on Taffet after she got tagged.

She wasn’t even supposed to be at the field that day.

Ward normally doesn’t travel with teams during their offseasons. But she wasn’t comfortable with the Rams playing at a public facility without medical supervision, so she canceled her weekend plans.

The morning of the game, Fordham head coach Melissa Inouye sent a text message to Ward asking if she could bring the AED. Ward told Inouye the red bag was already packed and ready to go.

As Taffet got closer to the dugout, Ward noticed a strange look in her eyes. She saw Taffet collapse near home plate and sprinted through the dugout to get to the field.

They all noticed Taffet had stopped breathing and was turning an ashy blue color.

Ward yelled for her red bag as Miller and Lapicki began performing CPR.

Ward pulled out the AED and strapped the pads to Taffet’s chest. She hit the button to shock her heart.

“An AED is never a tool you want to take out of your toolbelt,” said Ward, 29, who has a bachelor’s degree in athletic training from State University of New York at Cortland. “But I am very glad I had it, and glad I went to a really good undergrad school where my medical emergency teacher taught the whole class about it. I have been prepared for this for a solid 11 years now.”

‘Luckiest girl in the world’

After his daughter was tagged out at first base, Paul Taffet had turned away from the field. The “typical intense softball father” began pacing along the left field line waiting for the next at-bat.

He heard a gasp from the crowd, and turned around. His daughter had collapsed near home plate.

He raced onto the field while Taffet’s mother, Maria, normally the more calm one in the family, was in a panic and being comforted by other parents.

“I heard someone say ‘I have no pulse’ and my mind just exploded,” Paul Taffet said. “From that point, I remember hearing the defibrillator clear as day in a calm, male voice telling them exactly what to do. But I just went blank after that. To see my daughter technically dead on the field from a softball game … there are no words.”

As the medical personnel performed CPR on Taffet, Fordham assistant coach Matt Klampert took the rest of the team into the outfield. Some players were sobbing and throwing up from the shock.

Standing in the other dugout was the coach that recruited Taffet to Fordham. Villanova’s Bridget Orchard spent 17 seasons at Fordham before returning to coach her alma mater in 2019.

Fordham graduate senior Brianna Pinto prayed her friend would live. She saw Taffet hit the ground and thought she just tripped as she’s been prone to do in the past.

“My first reaction is that she may have hit her head. But then I realized something was seriously wrong and started having a panic attack,” Pinto said. “I had to walk away from it for a little bit as they were getting the AED out. It was very emotional.”

After the initial shock from the AED, Taffet’s heart started beating and she regained consciousness.

She was confused and a bit petulant. She asked if she had hit a home run and wanted to get up and keep playing.

She noticed a huge crowd surrounding the field, and made eye contact with Pinto.

“I remember looking at her and she was crying hysterically saying, ‘You are going to be OK.’ That is when it hit me something really serious actually happened,” Taffet said. “That’s when they told me my heart had stopped and they brought me back to life.”

Paul Taffet typically hears a steady stream of sirens any time he attends games at Branch Brook Park, but that day was eerily silent.

The first siren he heard was the ambulance coming to get his daughter.

Taffet was transported to nearby University Hospital, where she spent two nights undergoing a battery of tests to figure out what went wrong.

The doctors told Taffet they couldn’t find a reason her heart stopped beating. They thought she may have choked on the gum she was chewing or suffered from commotio cordis, which occurs when a person is hit in the chest and the impact triggers a dramatic change in the rhythm of the heart.

But after ruling those out, they told her family it was possibly just a “freak accident.”

Taffet returned to school a few days later. Fordham arranged for her to meet with Dr. Sonia Tolani, the co-Director of the Columbia Women’s Heart Center at Columbia University Irving Medical Center.

Tolani ran more tests that came up normal, but had a nagging feeling she was missing something. She ordered Taffet to get a CT scan, and discovered a rare underlying problem.

Taffet was diagnosed with ALCAPA, a congenital heart defect in which the left coronary artery arises abnormally from the pulmonary artery.

ALCAPA is a very rare condition. Without surgical intervention, most babies don’t survive beyond the first year.

“I basically could have dropped dead at any point in my life up to that point,” Taffet said. “The first thing the cardiologist told my parents is I am the luckiest girl in the world.”

Taffet was admitted to the hospital on the day of her diagnosis, and scheduled for open-heart surgery four days later to fix the problem.

Inouye had accompanied Taffet to her initial appointment at Columbia and remained with Taffet for hours until her parents arrived.

“She waited in that hospital with Sarah like she was her own daughter. She never left her side,” Paul Taffet said. “That is what I love best about coach. She truly loves her girls. They are her family.”

In the days that followed Taffet’s collapse on the field, Ward couldn’t stop thinking about the incident. She was grateful everything worked out, but wondered what was wrong.

“Never in my life did I think she had a birth defect that should have killed her before she was 1. That just made this entire thing even more shocking,” Ward said. “She was fortunate to have this happen on a softball field with medical staff and an AED there instead of walking down the street getting pizza with her friends. The first thing that we said when we came off the field was everything kind of happens for a reason.”

Taffet never cared about having AEDs at sporting events. She never even considered it before. But she now wants to become an advocate and make sure people understand their value.

“If an AED wasn’t there, I wouldn’t have survived because the ambulance wouldn’t have come in time,” Taffet said. “It is very important to find a way to get the awareness out there and try to get trainers and AEDs at these facilities.”

The NCAA has AED guidelines in its medical handbook and provides member schools with a cardiovascular care checklist of best practices. They encourage trainers and coaches to get AED/CPR certified.

But many high school and youth organizations don’t have structured plans in place for medical emergencies or AEDs on site for practices and games. The cost of an AED runs between $950-3,000.

“Many of these recruiting tournaments don’t have medical personnel at all around or have an AED on location. Just from a liability and risk management standpoint, they are putting themselves in a really tough spot,” Inouye said. “I think it’s an important message to get out to all other coaches. You don’t want to take a chance and have something tragic happen that could have been prevented.”

Since her surgery, Taffet feels like she has a new lease on life. She is expected to return to softball this season, and is excited to discover her athletic potential with a normally-functioning heart and newfound gratitude.

“It has put a lot of things in perspective for me,” said Taffet, who has two seasons of eligibility remaining. “It’s made me realize I shouldn’t take softball so seriously. It was almost taken away from me so fast. For a game I love so much, I need to enjoy it more and be thankful and privileged that I am alive to play it every day.”

The Rams are taking it cautiously with Taffet and don’t want to rush her back before she is ready to play.

“But it will be pretty amazing when she does get on the field again,” Inouye said. “I know everyone in our program won’t be taking another minute on the field for granted after what happened to Sarah. This experience has brought the team closer together.”

Shortly after the incident, Paul Taffet reached out to Orchard at Villanova. He wanted to be sure Villanova first baseman Victoria Sebastian, a fellow New Jersey-raised player like Sarah, wasn’t feeling any guilt for the play that set off the chain of events.

“She actually saved my daughter’s life,” he said. “If Sarah doesn’t run into that tag that day, it could have been a different outcome for Sarah.”

Fordham opens the season at the Grand Canyon Kick-Off Classic in Phoenix, Ariz. on Feb. 11. Paul Taffet has already been scanning airline options just in case his daughter is cleared to return by that point.

“I looked up tickets the other day because I have to be there for her first game,” he said. “I told Coach Melissa, ‘are you bringing the tissues or am I?’ I know I am going to lose it as soon as I see her back on the field.”

Paul Taffet wants to honor all the people that played a role in helping save his daughter’s life at the field in New Jersey. He wants to bring them to a Fordham home game this season as a show of gratitude for giving his family the greatest gift possible.

“They are all heroes,” he said, fighting back tears. “Every single one of them is a hero for helping save my daughter’s life. How can a father ever repay that? You can’t.”