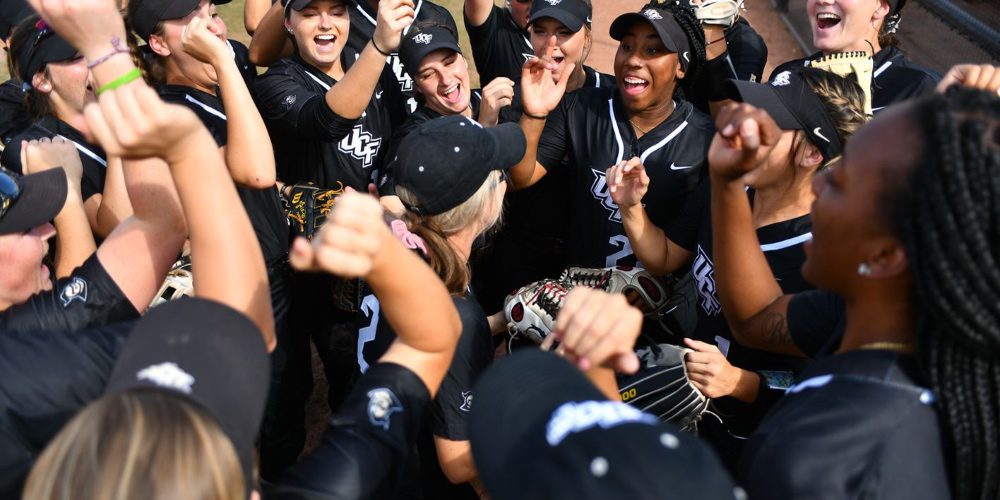 Like any good head coach would, UCF’s Cindy Ball-Malone has devised a game plan to cover every detail. She’s studied all the options involved, strategically arranged her team and anticipated any potential changes.

But Ball-Malone isn’t trying to beat an opponent. She’s preparing to have a child.

Ball-Malone is due to give birth on April 17th, the same day UCF opens a three-game home series with Memphis.

She has scheduled her C-section at 7 a.m. to give her husband, Robert, a volunteer assistant coach, enough time to bond with their new baby and still make it to the field in time for first pitch at 6 p.m.

Ball-Malone expects to take two weeks of maternity leave – just like she did when her sons were born in August and January while she was coaching at Boise State – and be back in the dugout for UCF’s Senior Day, followed by a trip to Houston for a May 1-3 series.

“Obviously that is with everything going smooth and everyone being healthy and all of that,” Ball-Malone said. “Knowing I have to step away is hurting my heart a little bit, but I trust the staff and the girls are going to handle it.”

Ball-Malone is hoping to make up for some of her time away from games and practices by leading UCF to an NCAA appearance this season.

She believes UCF has a team with the potential to play deep into May. The Knights are coming off a 4-0 weekend at the USF Tournament that included back-to-back run-rule victories over Tennessee. Their 12-2 start is tied for the best 14-game start in program history.

No. 25 UCF has a big game against No. 8 Florida State today in Tallahassee.

“It was just awesome to be a part of something this weekend like that and to see the girls just play,” Ball-Malone said. “They played with so much composure and it literally looked like we were at practice and that is how it should be. They are buying in.”

She led the Broncos to the 2018 NCAA tournament, setting records for the most wins in a season (40), most conference wins (18) and the first conference title in program history.

Ball-Malone wasn’t looking to leave Boise State, but the call from UCF was too hard to resist.

“It was probably one of the most gut-wrenching feelings,” Ball-Malone said. “It felt great to be wanted and loved, but at the same time I was going to have to let go of something I was extremely proud of building and players that I loved coaching.”

After an All-American career at the University of the Pacific, Ball-Malone had worked her way up through the college coaching ranks. She had stints at Cal State Northridge, Consumnes River College, Modesto Junior College, UOP and Washington.

Ball-Malone believed she left a good foundation in place that Boise State could sustain, and was eager for a new challenge on a different side of the country.

“This was the best decision for my family. I am not just a coach, I am a mom, a wife and I am also a businesswoman,” Ball-Malone said. “In order to keep the integrity in our game, I needed to do this as a coach and make sure they are supporting softball like they are here at UCF. To go and snag somebody from the West Coast shows these people are serious about the game and what their vision is.”

After an initial adjustment period, UCF’s players have embraced the new style of the coaching staff. The Knights are receptive to learning and figuring out ways to win.

They have a deep pitching staff this season, led by Alea White, Gianna Mancha and Breanna Vasquez, and three freshman making immediate impacts in the lineup.

“They are just going out there and competing, and I attribute part of that to our senior leadership,” Ball-Malone said. “The kids who are a little bit older than them are showing them the way and taking care of things and they are able to just focus on making us better and learning the way.”

“At San Jose State, she would always come up with the big swing and just beat us,” Ball-Malone said. “We’d have her held down and then all of a sudden she goes and hits a triple or hits a home run, so to be able to be in the same jersey with her is awesome.”

Beyond her statistics, Blair’s international experience and softball knowledge has trickled down to the rest of the team.

“She is going to be a coach for sure. She will talk things up and say, ‘Hey coach, let’s do this now,’ and the other girls are doing it too,” Ball-Malone said. “It started out as coach-driven and coach-based and now it’s turning into a more player-driven team.”

Once Ball-Malone found out she was pregnant and due during the season, she worried about how that would impact the Knights. She called Washington head coach Heather Tarr and asked how she should handle it. 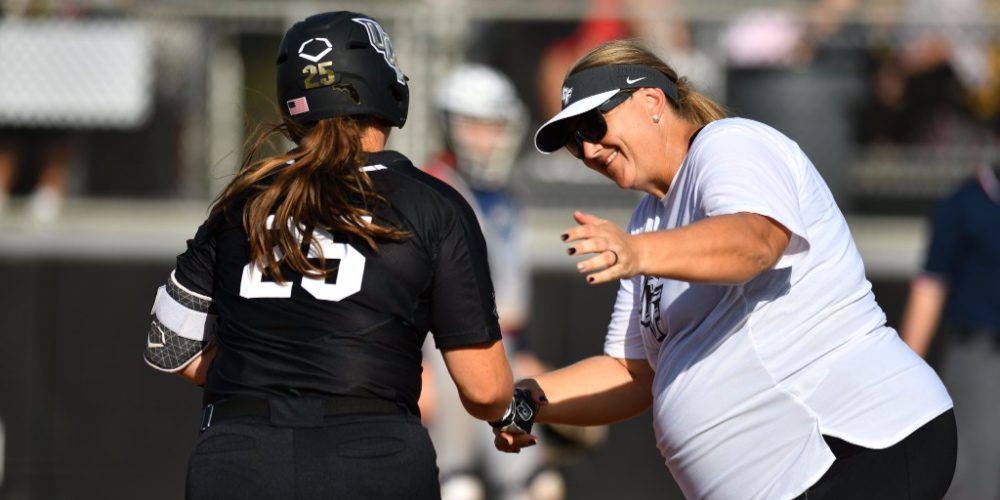 “She said, ‘You do it and you show your players they can do this and they can still rock their careers,’” said Ball-Malone, who spent two years on Tarr’s staff at UW. “Being a woman and having the ability to have children doesn’t slow you down and stop you. It actually empowers you.”

Ball-Malone told her team during their holiday party in December.

“As a coach, I thought ‘OK. This could ruin this year.’ But they were all excited and crying and happy,” Ball-Malone said. “No one said, ‘Wait. When are you due?’ They were not worried about that. I think that is what is so special about this group.”

After playing FSU, the Knights will have a few more chances to improve their NCAA tournament credentials against Power 5 programs when they travel to Southern California in early March. The trip will include games against UCLA, Michigan and Minnesota.

If all goes according to Ball-Malone’s plan, she will be back from her short maternity leave and in the dugout for the season’s stretch run.

After finishing 34-21 last season and not hearing their name called on Selection Sunday, UCF’s players are determined to earn an NCAA berth to help christen the new baby’s birth.

“Those returning seniors came back this year and said they don’t want to have that feeling again,” Ball-Malone said. “They have been working their tails off all fall and during summer training and are really motivated to get the culture of this team where it needs to be.”