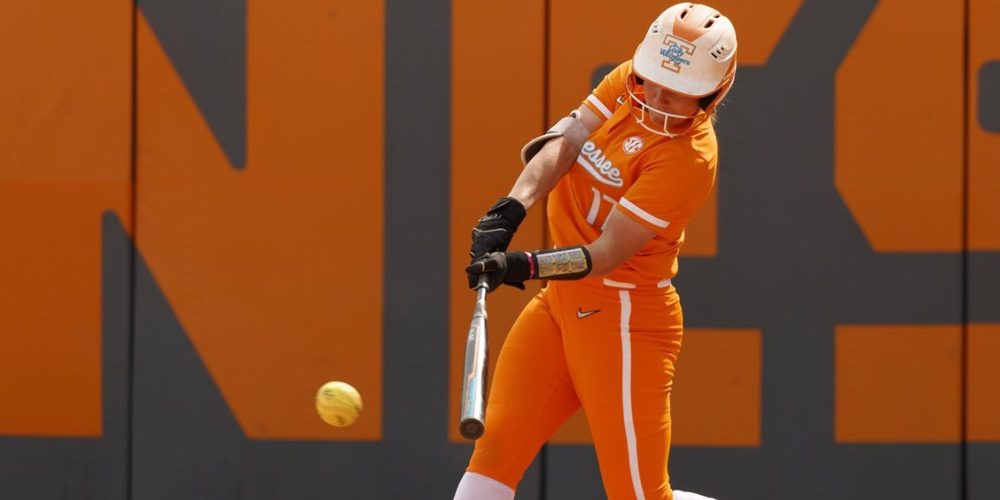 KNOXVILLE, Tenn. – Tennessee co-head coach Karen Weekly stood just outside the dugout entrance as the Lady Vols came jogging back from the field.

Toledo had just scored three runs in the top of the eighth inning to take a 9-6 lead and things looked dire for Tennessee.

The Lady Vols were coming off a rough stretch, and another deflating loss could have sent them spiraling even deeper.

They’ve been without their injured ace the entire season and relying on an inexperienced pitching staff to pick up the slack. It’s been as bumpy as expected.

Tennessee has seen some infamous streaks end in recent weeks. The Lady Vols are not ranked for the first time since 2004 and had their 100-game winning streak against in-state opponents snapped with a loss to East Tennessee State University.

Weekly wasn’t about to let her young team give in against Toledo. She’s talked all season about the need to keep throwing punches, and now was their chance.

“One at-bat at a time,” Weekly yelled while clapping. “Nobody needs to be a hero. Just get on base.”

From an inside-the-dugout vantage point, what transpired over the next inning-and-a-half could become a victory with longer-lasting ramifications. It didn’t come against a ranked team or even an SEC opponent. It came in the third game of a home tournament against a MAC school with a .500 record.

But the back-and-forth struggle that took more than three hours instilled a belief that Tennessee desperately needed. The Lady Vols rallied for the final four runs, securing the 10-9 comeback win on a walk-off sacrifice fly by Amanda Ayala in the ninth.

The game was a microcosm of Tennessee’s season to date, filled with highs and lows, mistakes and clutch plays.

It required every healthy player on the roster contributing, and every ounce of energy to stay positive. It featured some “Good Bubble Juju,” a smashed clipboard and foam rolling on the dugout floor.

“I don’t think I’ve ever seen a team fight back like we did and show so much resilience,” Weekly said. “There were so many times that game could have been lost and so many people came up and got really key hits or got really quality at-bats when we needed it.”

Before the national anthem plays and the lineups are announced, the Tennessee players gather near the leftfield wall for a team prayer.

There is a chill in the air for the 12:30 p.m. start and the stands at Sherri Parker Lee Stadium are half full. A few blocks away, the men’s basketball team is playing its final regular-season game and baseball is close to starting.

Weekly is trying to figure out how to turn on the portable heater in the dugout. She discovers it’s not plugged in and finds the outlet so it can begin emanating warmth.

Ally Shipman lays flat on the dugout bench having her right hamstring worked on by Tennessee athletic trainer Sammie Charters.

The sophomore catcher missed nearly all of last season with a knee injury suffered in a brutal collision while running to first base. But Shipman’s been rounding into top form, providing the Lady Vols with a potent offensive weapon and a calming defensive presence. 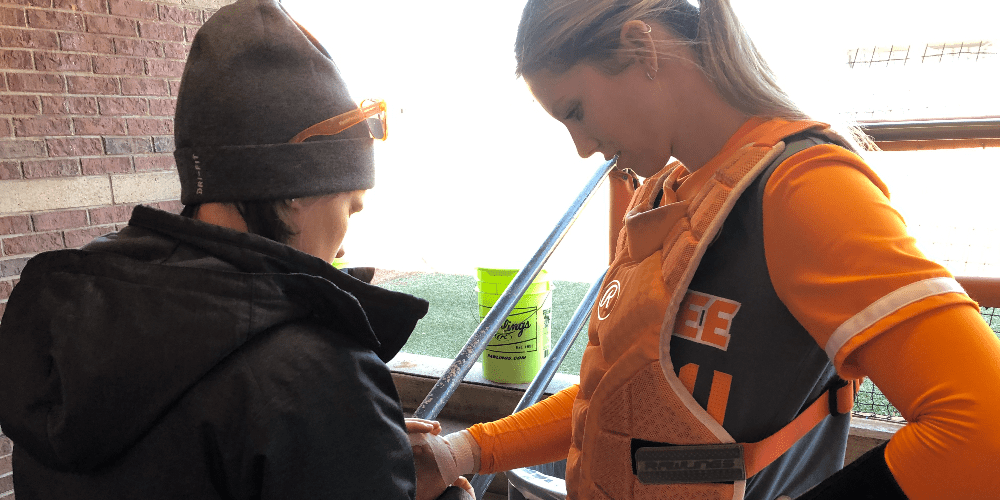 The pitching staff has needed her guidance more than ever.

The Lady Vols were expected to lean heavily on Ashley Rogers, but the sophomore ace has been sidelined by an injury.

Rogers has started throwing again, and Tennessee expects her back in the rotation at some point. But the medical staff has to see how her body responds to more activity before clearing her to play.

Having lost Caylan Arnold to a transfer to Florida State, the rest of the Tennessee pitchers were thrown into the fire without much experience.

Callie Turner and Anna Hazlewood are freshman. Samantha Bender is a sophomore transfer from Iona, who was 1-11 with a 5.45 ERA for the Gaels.

Throwing in big games is new to all of them, and the Lady Vols would end up needing them all against Toledo.

Tennessee’s offense is slow to start, going without a run for the first four innings and falling behind 2-0. The coaches are not pleased with the team’s approach at the plate.

Ayala returns to the dugout after striking out and receives an earful about appearing sleepy.

The junior outfielder takes it in stride.

“I kind of came out slow for sure. But the biggest thing is to just keep a constant approach,” Ayala says. “You hear things, but you have to remember who you are playing for and why you do it and these girls mean everything to me. I have to get the job done any way I can.”

As Taylor Weekly steps to the plate for Toledo, Tennessee co-head coach Ralph Weekly fiddles with a chart in his hands. His granddaughter being the starting centerfielder for the Rockets presents some mixed emotions.

“Half of me wants her to get a hit, and half of me wants us to get her out,” he says after Taylor hits into a double play. “It’s kind of bittersweet. She hit that one hard, but right back to the pitcher.”

After Bender gives up back-to-back home runs in the fourth, she is replaced by Turner, who races into the dugout from the bullpen, grabs her armband and heads right back out to the circle.

Bender enters the dugout, slips into a black jacket and walks to the Gatorade cooler for a drink. She stares at the wall before throwing her cup into the trash with a little extra force.

Her teammate’s leave her alone, letting her decompress. But Bender quickly jumps up onto the dugout step and yells, “Here we go Cal” to support Turner.

Nobody is surprised to hear the smash of plastic after the Lady Vols fly out on the first pitch to end an inning with two runners on base.

It’s happened a few times already this season as frustration manifests into a broken clipboard.

But after slappers are inserted to spark the lineup, things begin to turn around in the fifth.

Senior outfielder Jenna Holcomb grabs the Double Bubble and races around tossing individually-wrapped pieces to everyone.

The Juju doesn’t arrive immediately, however. It worked more like a time-release chewing capsule.

Toledo takes a 4-3 lead in the sixth, and Hazlewood turns her visor and sunglasses upside down to ignite a rally. Ayala hits a two-run double and the Lady Vols are back in front.

Melissa Brown, the director of team operations, mentions to a student manager sitting on a ball bucket that Chick-fil-A will be arriving at 2:45. As the game stretches on longer than anticipated, someone will need to leave the dugout to receive the order.

The players have largely subsisted on Chewy granola bars, pretzels and bananas.

By far the most popular spot in the dugout is near “Mueller.” The large athletic training bag is filled to the brim by Charters. There are obvious items like tape, gauze, bandages and eye drops, and more random things like hair ties, bobby pins, Sharpies, stain remover, cough drops and gum.

“It’s really just about what my athletes need. Another team might not ever use some of the things in there, but it’s what my team needs,” Charters says. “I give it a check to make sure I am good before every game and have enough of what I need stocked.”

As Charters rummages through the different pockets to get tape, Bender grabs the large black foam roller nearby and begins rolling on the dugout floor to loosen her quadriceps. 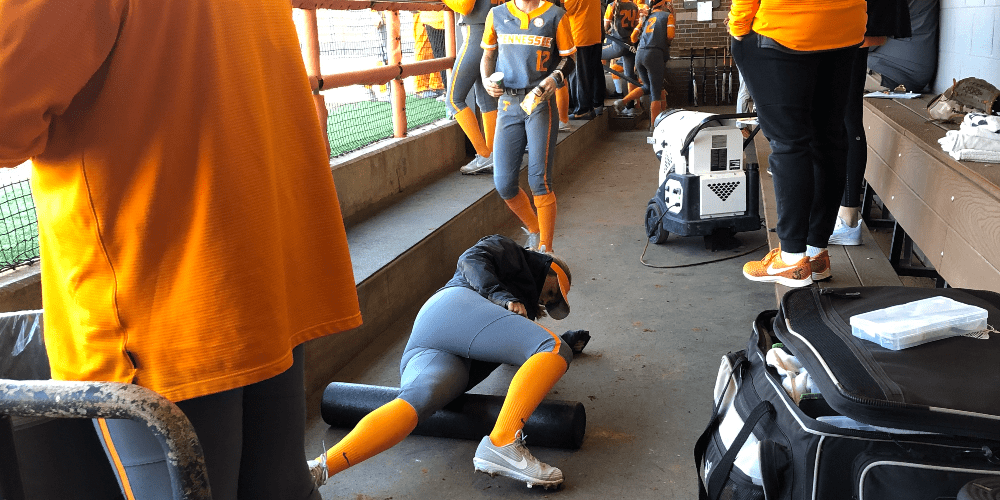 Bender doesn’t know it yet, but she’s going back in the game soon.

Toledo scores two runs off Bender to take a 6-5 lead in the seventh, but Tennessee’s Ashley Morgan sends the game into extras with a double off the centerfield wall.

The Rockets answer right back with three runs in the eighth, and a hush falls over the crowd. The deficit feels insurmountable.

After spending most of the game in the dugout grooving to walk-up music and cheering loudly, Hazlewood gets the call in the ninth and throws a hitless inning of relief.

The Lady Vols pour out of the dugout and onto the field to celebrate with hugs for Willingham and Ayala.

“This game was really huge for us in the sense that we fought, fought and fought and came out on top,” says Ayala, who finishes 3 for 5 with four RBIs. “We’ve been dealing with some different types of adversity, and that is probably the first time all season everybody from top to bottom really synced together.”

Imbued with confidence, the Lady Vols returned to the field that night and beat ETSU 10-2 in five innings. They would capture the title the following day with a thorough 5-0 victory over Stanford.

But the ups and downs of the young team’s season hit another bump on Tuesday night when a visiting North Carolina squad seeking revenge for last season’s NCAA ouster beat the Lady Vols 3-2. There wouldn’t be another stirring comeback.

There are many more games ahead for Tennessee (14-9), including an entire SEC gauntlet to make it through and a lengthy NCAA streak to keep alive. The Lady Vols can’t expedite the growth process or forecast injuries. But they do have a victory in reserve they hope can be used as a rallying cry for what is possible.

“I think we will refer to this win all year long,” Karen Weekly said after beating the Rockets. “Whenever we feel like you are down and out, it will be ‘Don’t forget Toledo.'”