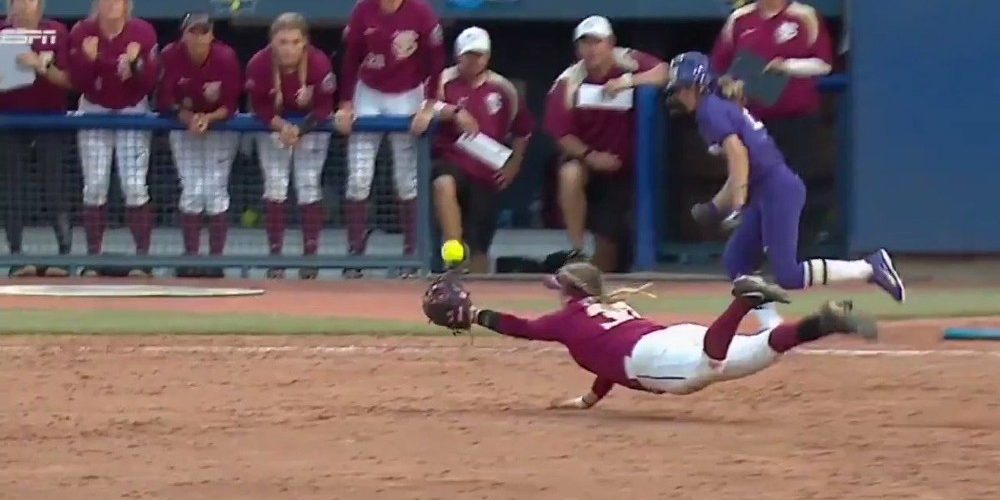 Jessie Warren had prepared her entire career for the moment. She’d spent hours on the field doing defensive drills. She’d analyzed angles and reviewed hitting tendencies. She’d trained in the gym to get stronger and faster.

When the opportunity arrived on the biggest stage the sport has to offer, Warren was ready.

The Florida State third baseman let instinct and talent take over to make the defining play of the last decade in college softball.

“People still send it to me to this day. Fans and young girls, that is kind of how they know me now. It’s pretty cool that people kind of refer to that play as the Jessie Warren Catch,” Warren said. “I know a lot of people come up to me and say, ‘I made the Jessie Warren Catch.’ It’s so cool that a play when someone goes all out is now turned into my name.”

FSU – ranked No. 5 on D1Softball’s Top 50 programs of the last decade list – was clinging to a 1-0 lead in the bottom of the seventh inning against Washington in the championship series opener.

The Huskies led off with a single, and tension began to rise slightly among the Seminoles.

“The momentum shifted right back to the Washington dugout once that runner got on base. It was kind of like, ‘uh oh,’” said Ellie Cooper, a graduate assistant coach for FSU at the time. “We were always pretty confident with the direction we were going as a team. We are always set up to deal with any type of adversity. That is part of our culture. But you could feel the momentum shift right away.”

Anticipating a sacrifice bunt by UW outfielder Trysten Melhart from the left side, Warren crept closer to home plate.

As soon as she saw Melhart square around and the ball pop into the air, Warren shifted into high gear. She got a good read on the ball, and soared in front of the pitching circle in a Superwoman full extension.

Warren landed on the first base side of the infield with the ball nestled in her glove as she hit the dirt. Without hesitation, she popped onto her knees and threw a strike to first base to complete the jaw-dropping double play.

“I remember just going all out for it and saw that it had some hang time,” Warren said. “I didn’t think I had enough reach to get it, but I still wanted to give it my full effort because that is how I go all the time. It was my only option being my senior year. I didn’t want to leave anything on the field.”

FSU pitcher Meghan King was in the circle trying to secure the complete-game shutout when Warren made the play. King took a step forward to go for the bunted ball, but saw Warren diving across the field in front of her.

“I immediately thought go one. I think I pointed to first base,” King said. “I was so in the zone when she made the catch, and then obviously started celebrating after because that was freaking insane.”

Everyone in the dugout held their breath in the split second it took for Warren to potentially save the game and infuse even more confidence in the Seminoles.

“The ball goes up in the air and Jessie makes that play and I remember just screaming and I got lightheaded,” Cooper said. “I remember it to this day. I screamed and just knew in that moment that we were going to win the national championship. That moment sealed the deal. It was still only Game 1, but I knew.”

Before the Seminoles had even walked off the field with the 1-0 victory, Warren’s defensive play had gone viral on social media. Former Lakers legend Kobe Bryant was one of the stars to acknowledge Warren, and the play was No. 1 on SportsCenter’s Top 10 plays.

“It was just crazy how many people saw the play and how it got out there so quickly,” Warren said. “My phone was blowing up with notifications on social media and texts. My phone literally froze and I had to turn it off for a little while.”

The power of having women’s sports featured on national television became even more evident to Warren.

“It’s pretty cool to see how much of an impact technology can have, because had we not had ESPN nobody sees that except the people that are in the stadium,” said Warren, who was invited to the ESPYs that year as a finalist for the Best Play category. “It’s pretty cool how technology allows us as human beings to grow who we are through the world. Had ESPN not been there and had X amount of cameras and got every angle of the play, it wouldn’t have been as cool as it was.”

Warren was able to leverage the media attention into future earning opportunities once she graduated from FSU.

“It grew my brand a lot and put my name out there for the younger generation so I could teach and give a lot of girls lessons,” said Warren, the 2018 WCWS Most Outstanding Player. “Had I not been on that stage at that moment I made the play, I don’t think a lot of the stuff I am doing now would have happened. A lot of things changed for me because of it.”

Although the diving double play elicited eye-popping reactions from much of the world, Warren’s teammates were less surprised.

“Jessie literally makes those plays in practice and games all the time. She just finally got the national recognition that she deserved,” King said. “It seems so crazy to everyone else, but to us that was just Jessie doing what she always does.”

“If Jessie Warren doesn’t make that play, it’s weird,” added Cooper. “I have seen Jessie Warren make better plays than that. She flew under the radar a little bit too much and that play just finally put her name on the radar.”

FSU’s run to the national title had an air of improbability from the start. The Seminoles avoided elimination against LSU in the Super Regional with home runs by Carsyn Gordon and Anna Shelnutt in the 11th inning.

They dropped the opening game at the WCWS to UCLA before becoming only the third team in NCAA history to lose their first game and come all the way back through the loser’s bracket to win the title.

Warren’s double play will be shown on every WCWS highlight package for as long as the event takes place. It will amaze. It will inspire. It will endure.

“It was definitely a momentum changer and it stayed on our side and kind of drove us to want to win it all even more,” Warren said. “There was something special about that team. I’ve never felt that way and I don’t think I will ever feel that again.”