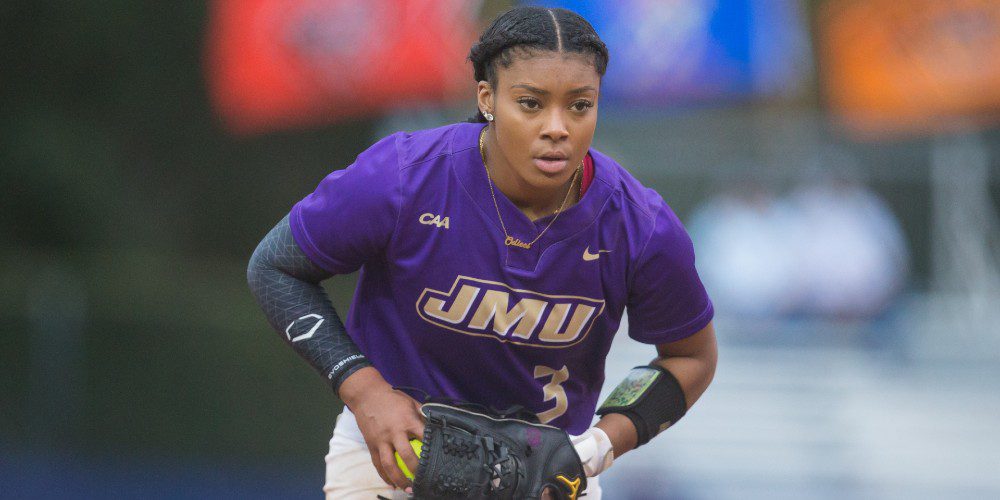 Odicci Alexander would have drawn attention no matter what year she participated in the Women’s College World Series.

JMU’s two-way star has a certain swag that transcends the field and a level of talent that elicits admiration.

She plays for a mid-major program making its first-ever appearance at the WCWS, and the underdog story always resonates.

But having Alexander in Oklahoma City this year of all years is much more significant.

Following months of social justice activism and protests over racial inequality across the country, having a Black pitcher in the circle at the WCWS is symbolic and inspirational.

Having Alexander as the clear-cut ace of a staff on the sport’s biggest stage will resonate far beyond the traditional realms.

“I get chills watching her because I understand what it means. It is so much bigger than softball for some of these viewers,” said Howard head coach and former Nebraska player Tori Tyson. “I don’t think I’ve ever been personally so emotionally invested in a player. But we as black women have been saying, ‘See us. Acknowledge us,’ and Odicci made it where the whole world had to acknowledge her by performing with so much passion.”

Angelica Selden has been in Alexander’s shoes. The three-time All-American pitcher helped lead UCLA to three WCWS appearances during her career from 2005-08.

Although Selden is mixed race, she’s always been identified as a Black athlete.

“My race was always fluid growing up, but being a Black pitcher definitely made me feel that I was different or made me feel like I was the ‘other,’” Selden said. “It’s a position where you expect the blonde-haired, blue-eyed, tall skinny model of a girl on the field. I felt like I stuck out like a sore thumb.”

Selden gained inspiration growing up by watching other Black softball players like Nebraska pitcher Peaches James and UCLA shortstop Natasha Watley. They let her know what was possible and convinced her to not let any stereotypes hold her back from chasing her WCWS dreams.

“Whoever is on that big stage at that time it means something for whatever little Black girl is watching at home regardless,” Selden said. “But because of all that is happening in our world right now, I feel like this is a moment for an awesome opportunity for anybody who is watching the sport to see that Black women can lead.”

Watley began following Alexander’s career two years ago when JMU traveled to UCLA for the Super Regionals. Alexander was the backup to All-American pitcher Megan Good, but her all-around talent and vibe instantly caught Watley’s eye.

“She just has that ‘it’ factor,” Watley said. “Regardless of whether she is Black or not, she’s still a stud. But the fact that she is Black and she is a pitcher, to me that is meaningful. I love to see it, especially this year.”

Before becoming the first female Black head coach in Duke’s athletic history, Marissa Young was an All-American pitcher and two-way threat at Michigan. She’s heartened by Alexander’s success and the potential impact it could have at all levels.

“It’s really special to see what Odicci has been able to do for JMU and all the little girls that play softball and look like her,” Young said. “Too many times Black players are described as athletic or raw, in need of development or specialized training and coaches are reluctant to take them because they aren’t as polished as their counterparts.”

Being pigeonholed for certain roles or stereotyped for their abilities is something many Black players fight against. The greater visibility Alexander has gained during JMU’s postseason run could help spark change and counter any ingrained subconscious bias.

“Odicci literally put JMU on her back and took them to the World Series. I hope it opens both eyes and doors for others that come behind her,” Young said. “The message should be heard loud and clear: if given an opportunity, they will make the most of it.”

Tyson is flying to OKC to watch the opening games of the WCWS and meet Alexander in person. She wants to see Alexander perform her runway strut with teammates during warm-ups and flash her ‘I got this’ smile in the circle.

“She is carrying the load for our culture a little bit,” Tyson said. “We have all been screaming and yelling to see us and she is just taking this on and doing it her way. She just has this energy about her. She is so poised yet so passionate and embodies so much of our culture.”

As she steps into the circle at USA Softball Hall of Fame Stadium for the first time on Thursday against No. 1 Oklahoma, Alexander will be playing only 120 miles away from where the Tulsa Race Massacre took place. Remembrances have been held this week to commemorate the 100-year anniversary of one of the most violent racial attacks in our country’s history.

Alexander is not the first Black pitcher to appear at the WCWS and she won’t be the last. But in a sport in dire need of more diversity at a time of widespread racial reckoning, she is the perfect person in the perfect position on the perfect stage.

“I feel like the whole community is gravitating towards her,” Watley said. “I think she represents excellence and she represents strength. Her being a young African-American girl, I am 100 percent cheering for her and I love that she is carrying all this on her shoulders.”