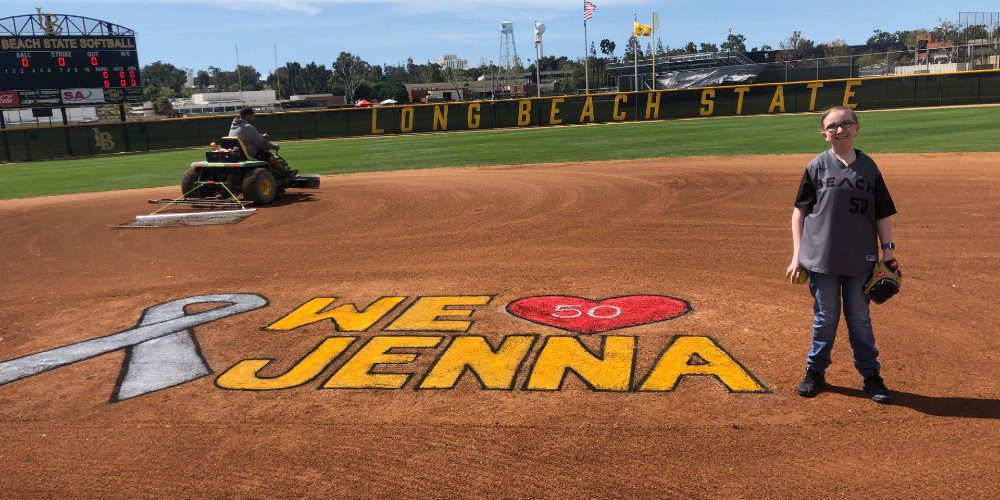 Jenna Jackson has never taken an official at-bat for Long Beach State. She has never fielded a ball in a real game or called any pitches.

But throughout the last decade, Jackson has been an integral part of every LBSU team.

Jackson was diagnosed with brain cancer at age 8, and has endured more than 37 surgeries since she was born. Despite all the health issues, the now 18-year-old Jackson never stops smiling.

LBSU, which is No. 48 on D1Softball’s Top Programs of the last decade list, holds a “Jenna Day” every season to celebrate Jackson and all she means to the program.

“It’s been perfect for our team because Jenna just has so much belief, and her attitude toward everything is really inspiring to our team,” LBSU head coach Kim Sowder said. “She comes and teaches our team a dance routine and it turns into a big celebration for her. The players absolutely love her.”

Jackson got connected with LBSU through associate head coach Panita Thanatharn. Before returning to her alma mater to coach, Thanatharn spent two seasons coaching at UNLV.

Jackson lives in Logandale, Nevada, and was introduced to UNLV through the Friends of Jaclyn Foundation, a nonprofit that pairs children with pediatric brain tumors and other childhood cancers with local sports teams.

LBSU typically travels to Las Vegas each season for a tournament, and Jackson began interacting with the Beach players.

“She would be in our dugout and still have her UNLV stuff on. Slowly, we worked our way into turning that all into Long Beach gear,” Thanatharn said. “The first time Kim met her, there was not a dry eye. Everyone at Long Beach just took to her family. Jenna really shows how we can be better people and better teammates.”

LBSU decided to invite Jackson to be the program’s guest at a home game in her honor, and she’s been traveling to Southern California every season since. Jackson creates canvas paintings for every player and spends the entire weekend hanging out at the field.

“LBSU softball means the world to me. The girls and coaches always do so much for me,” Jackson said. “They have a special day just about me. Jenna Day is my favorite day, not because it’s all about me, because I get to spend the day with the team. I get to dance with the girls, give them pep talks and do cheers with them.”

Although Jackson loves everyone in the Beach program, her favorite player is senior pitcher Devyn Magnett. The two have grown extremely close over Magnett’s four-year career, exchanging text messages and gifts regularly.

“My life was completely changed the day I met our sweet Jenna. She has a smile that brightens up the room, and an energy that is so contagious,” Magnett said. “She is the most thoughtful and considerate girl and has the most positive outlook on life. I am forever grateful for all the memories we have created with her and the friendship we have made over the years.”

Thanatharn knew from the moment she first saw Jackson 10 years ago that she would have a long-lasting impact on anyone she encountered.

“Once you meet her, it’s pretty easy to love that kid. She is pretty sassy and fiery,” Thanatham said. “She always tells us to believe, fight, be brave and strong and never to give up. She’s gone through so much and can’t do some things that other kids her age can and still finds a way to be positive.”

Jackson recently graduated from Moapa Valley High, and hopes to take some art classes in the future to learn new techniques. She wants to become an author and share her story with others.

The last decade Jackson has spent with LBSU will likely be a chapter that includes plenty of laughs, tears and inspiration. As far as LBSU is concerned, Jackson will be a part of the Beach family forever.

“I think the girls know now we are pretty privileged to get to play softball and how lucky we are. I don’t think they take that for granted,” Sowder said. “Jenna definitely gives us perspective on that. She lives every day with such passion and energy. She’s just an incredible person.”