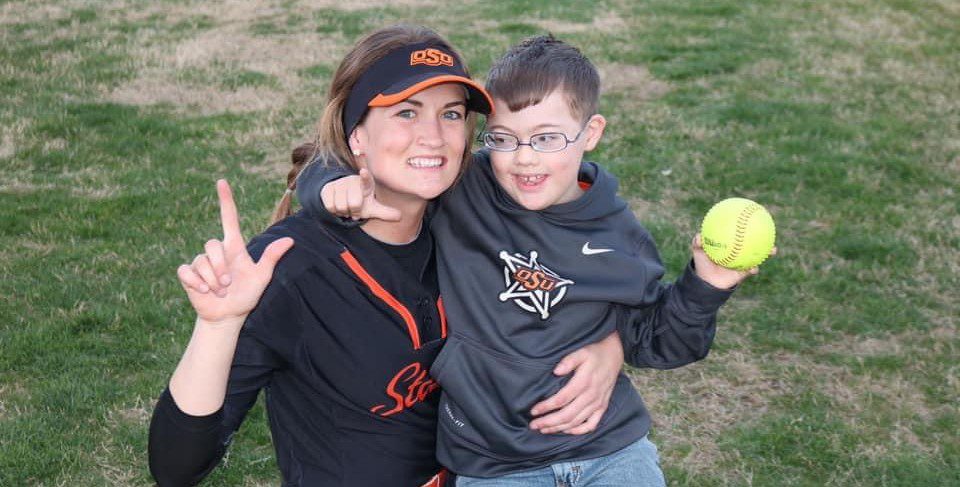 OKLAHOMA CITY – Chelsea Alexander looked into the stands at the recently-expanded USA Softball Hall of Stadium and instantly spotted her little brother.

Caden Alexander, 12, was wearing his orange Crocs with Chelsea’s number on them and giving her the pistol fingers.

His presence at Oklahoma State’s opening game of the Women’s College World Series on Thursday put the senior outfielder at ease.

Caden has Down syndrome, and he’s been to every game Chelsea’s played in her career.

They’ve been best friends from the minute Chelsea first laid eyes on him in the hospital.

“Caden has changed my perspective of life in so many ways,” Chelsea said. “He’s taught me the importance of love and how to love wholeheartedly.”

The Alexander family, which includes dad Daimon, mom Joey and older brother Chanse, didn’t get Caden’s diagnosis before he was born. They were informed by doctors when he was two weeks old. As her overwhelmed parents walked to the car in tears, a 9-year-old Chelsea provided needed guidance on the future.

“There is this sense of loss and guilt and what is going to happen with therapy and all of that. Chelsea looked at us both and said, ‘Guys, he’s still Caden. Nothing’s changed,'” Joey Alexander said. “My husband and I went, ‘You are right. We have already fallen in love with him.’ Chelsea was really our rock during that time.”

The Alexanders live on 78 acres of land in Ada, Okla. Chelsea and Chanse grew up showing goats and participating in 4-H and Future Farmers of America (FFA). The family wanted to get Caden involved. There was only one problem. He didn’t like many of the animals. But for some reason he was smitten by cows. They purchased a miniature Hereford and Caden began competing.

“He just fell in love with them. They are a breed he can show for the rest of his life,” Joey said. “We are building him a herd and not knowing exactly where life is going to take him. But he will always have that herd he can fall back on and earn money.”

Much like softball has positively impacted Chelsea, the family has seen the benefits of Caden showing cattle. He has blossomed physically and socially.

“I noticed a huge change in his confidence,” Joey said. “He is going to occupational therapy, speech therapy and physical therapy all at the same time and his therapists noticed a difference. They were like, ‘I don’t know what you are doing at home, but don’t stop doing it.’ He’s made major gains in everything.”

Two years ago, Daimon and Joey took Caden to the National Western Stock Show and Rodeo in Denver. The walk to the barn is far, and Caden grabbed the rope on his own for the first time and led his heifer past the noisy trailers and trucks.

“His dad and I were both in tears once he got all the way down to the bottom. At that point, we had already won,” Joey said. “It didn’t matter how he did in the ring the next day. The whole trip was a success.”

Caden’s outlook, attitude and endearing personality have been a blessing to his family and friends. They can’t help but smile and laugh whenever he’s around.

“Caden has never had a bad day. Every day is a good day,” Joey said. “He has bad moments or bad time periods within the day. But at the end of the day, it’s always been a good day. That’s just the way he views life and that is the way he taught us how to view life.”

Chelsea, who recently received her undergraduate degree in agricultural communications with a double minor in agricultural leadership and agricultural business, has tried to use her platform in softball to raise awareness about Down syndrome and intellectual disabilities.

She was heavily involved in the Special Olympics during high school even though Caden wasn’t participating.

“We’d always kid and say Chelsea got all the speed and left nothing for him,” Joey said with a laugh. “He is not super athletic, which is why cattle are great for him.”

Caden looks forward to the trips the family makes to the livestock shows, and loves staying in hotels with pools.

His upbringing attending all of Chelsea’s travel ball tournaments led to Caden calling hotel rooms “Caden’s room” and asking when they were going back.

At his sister’s games, Caden usually sits in the stands playing with cars or spending time on his iPad. His family brings earplugs in case the noise gets a bit overwhelming.

“He participates and watches even more than I think we know,” Joey said. “He will say that’s a ball or a strike or that was a good play. He really surprises us how much he has learned about the game.”

Caden’s favorite moment comes after the game when he sees Chelsea and can give her a big hug. The two have helped each other navigate life in their own ways.

“Chelsea’s learned to realize softball is a game,” Joey said. “We all love it, but life is so much bigger. People have bigger problems than going 0 for 3 today.”

Caden will be in the stands throughout Oklahoma State’s run at the WCWS to support his big sister. As she’s done at every game, Chelsea will seek him out for reassurance and gratitude for just being on the field. Their bond was built from birth, and won’t end even when the softball eventually does.

“I wouldn’t trade the impact he’s made in my family’s life for anything,” said Chelsea, who plans to return to OSU next season to play and begin work on her MBA. “I 100 percent would not be who I am today without Caden. He means the world to me.”