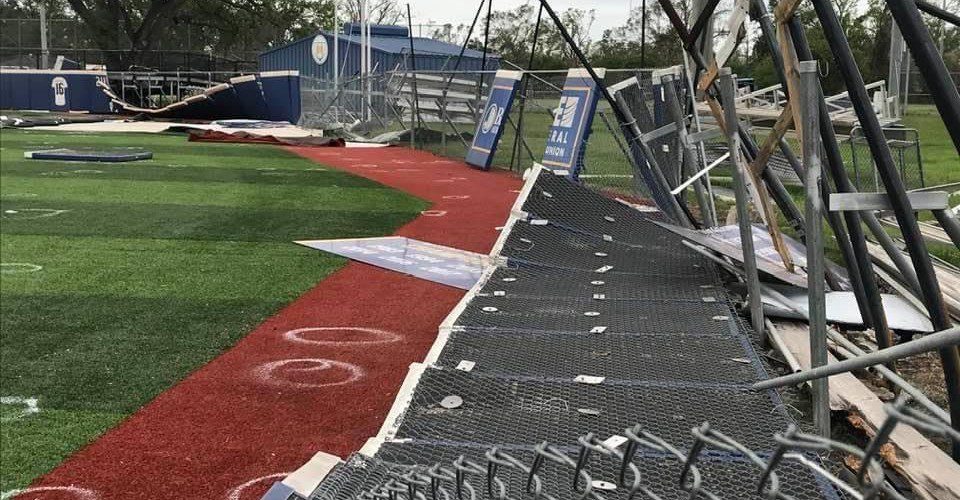 After two days of watching the destruction from a safe distance away, Cori McCrary climbed into her mom’s Nissan and prepared to make the five-hour drive back to Lake Charles, Louisiana.

The McNeese State softball players had evacuated ahead of Hurricane Laura, fearing what they would find once they returned.

The Category 4 storm made landfall on August 27th with wind gusts topping 150 mph. It was the most powerful storm to hit Louisiana since 1856, even more powerful than Hurricane Katrina.

McCrary left her home in Hattiesburg, Mississippi on Friday morning, stopping to pick up teammate Toni Perrin halfway through the drive. They wanted to assess the damage to their apartments and grab some personal belongings.

As they made their way through once-familiar streets, they could hardly recognize some of the buildings and storefronts.

They decided to drive by the softball stadium, and found metal and debris strewn everywhere. Both dugouts were destroyed, fences were knocked down and the home bullpen damaged.

“I knew it was going to be bad because I saw pictures, but that only gives you a small image of what really happened,” said McCrary, a senior shortstop. “It was way worse than I thought once we got down there and truly saw all the devastation everywhere. It was unreal.”

Despite the severity of the storm, the survivors of Hurricane Laura have been largely overlooked in the national picture. The coronavirus pandemic, wildfires in the West and upcoming national election have combined to take the area’s recovery off the media radar.

But the pain and suffering of trying to rebuild remain very raw in Lake Charles.

“I think someone on TV said we dodged a bullet and that is a gut punch to people that have gone through this because it is real and the amount of damage and people who have lost businesses or homes is significant,” McNeese State head coach James Landreneau said. “I met eight people just today that couldn’t live in their house, and that is what you find everywhere.”

Landreneau has resided in Lake Charles for more than 20 years. He witnessed the damage from Hurricane Rita and Hurricane Ike before Laura came crashing through.

“I have been through a lot of storms, and this is by far the most amount of damage I have seen by how widespread it is,” he said. “You drive into any neighborhood and it looks like a tornado hit for about 60 miles wide and 120 miles north and south.”

Rather than sitting on the sidelines, several McNeese State players decided to take action to help the community. For two straight weeks, they volunteered to clean up houses and businesses.

Sophomore Sara Geier was one of the first players to return to the area with her boyfriend, Reid Bourque, a junior infielder on the McNeese State baseball team.

They offered to help Landreneau clean up his house, which needs a new roof, chimney, fence and back porch after it was completely blown off.

McNeese State assistant coach Shellie Landry and director of team operations, Megan Holmes, created a list of everyone in need. They contacted home and business owners to arrange a schedule for the players to arrive and work.

“There was so much for us to do, we were happy to do it,” said Geier, a Mandeville, La., native. “What makes me happy as a person is I love to give back and bring some joy to whoever I can. It felt so good to do all these things and not have to ask for anything in return. The people were so grateful.”

The spirit of the community resonated with the players, and made the hours of manual labor easier to endure.

“People had every reason to be down and negative, but you just see a smile on their face because they are so thankful for your help,” McCrary said. “They are grateful for anything you do. It just goes to show you what type of community this is. Nobody is feeling sorry for themselves. Everyone is just moving forward.”

Landreneau has been overwhelmed by the outpouring of support from the softball community. Coaches and teams have sent money and care packages for those in need.

The staff from North Texas delivered a U-Haul filled with water, food and other household items. Central Arkansas head coach David Kuhn truly went the extra mile. He worked with his pastor to gather generators and cash and drove seven hours to deliver them to Landreneau.

“I am amazed by how many people reached out wanting to help within the college softball arena,” Landreneau said. “It really restores how great humanity is when fierce competitors can pull together at a time of need.”

Landreneau finally got a chance to assess the damage at Joe Miller Field at Cowgirl Diamond last week with claim adjusters.

The facility “took a pretty good lick” with dugouts, bullpens, fences, walls and turf needing to be repaired or replaced. McNeese State was in the middle of a renovation and adding a new locker room when the storm hit.

“If you take our facility and how far it’s come in the last eight years, a lot of people contributed a lot of money, time and effort,” Landreneau said. “We are committed to make sure nothing anyone has ever done goes to waste or feels unimportant. We will rebuild it bigger and better. This won’t be pushed to the side.”

McCrary could never have envisioned all that has taken place in the last seven months. She had her senior season cut short because of the coronavirus, and decided to return after the NCAA granted players an extra season of eligibility.

Having a hurricane that was at one point termed “unsurvivable” hit Lake Charles dealt another blow.

“Coach always says life is going to throw stuff at you, and it absolutely has thrown it at us,” McCrary said. “But nobody is more prepared than us to handle this adversity. It will make us stronger.”

As she surveyed the wreckage at each home they helped clean and repair, Geier gained a greater appreciation for everything she still had. If this year has taught the Cowgirls anything, it’s all about perspective.

“This is the stuff that really matters. Whether we win or not, what actually matters is the kind of people we are off the field,” Geier said. “I think we will all be excited to get back to sports, but this was a humbling way to show us that sports isn’t everything. There is a lot more to life than being just an athlete.”