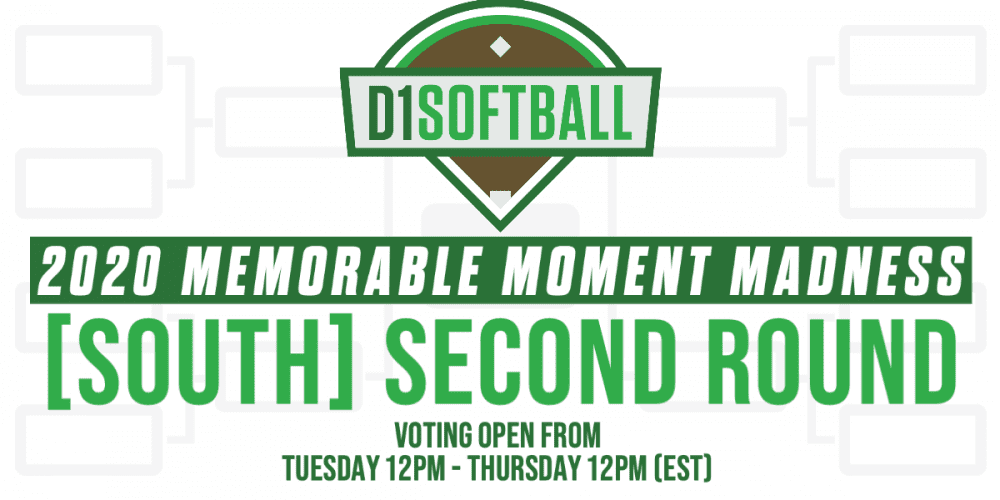 Remember, your not voting on the top teams, rather the Most Memorable Moments! There are four (4) ways to vote on your favorite moments from the 2020 season: 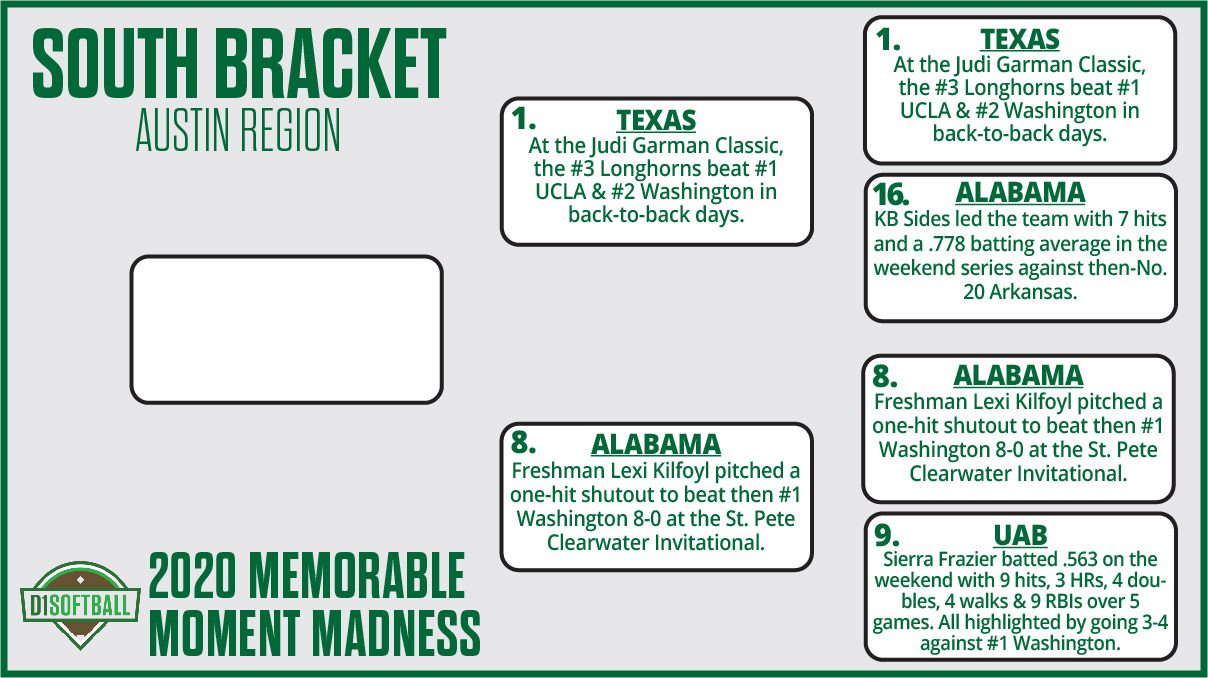 For the first time in UT history, No. 3⃣ Texas softball has beaten the top two teams in the country in back-to-back games as the Longhorns knock off No. 2⃣ Washington, 8-6!

Talk about a Texas two-step. All the No. 3 Longhorns did to start their Southern California swing was beat No. 1 UCLA and No. 2 Washington in back-to-back days. After handing the Bruins their first loss on Thursday in a non-conference game, Texas beat UW 8-6 at the Judi Garman Classic. The Longhorns used three pitchers in victory over UW, with Courtney Day picking up her fourth win of the season. Lauren Burke was 3-for-4 with a double, home run, two runs scored and three RBIs.

A one-hit shutout? Over the No. 1 ranked team in the country? In front of your hometown fans? Not too shabby 👏👏👏 pic.twitter.com/9KWWWWIDr5

Alabama Freshman Lexi Kilfoyl pitched a one-hit shutout to beat then #1 Washington 8-0 at the St. Pete Clearwater Invitational. Kilfoyl struck out six, picking up her second win of the season. 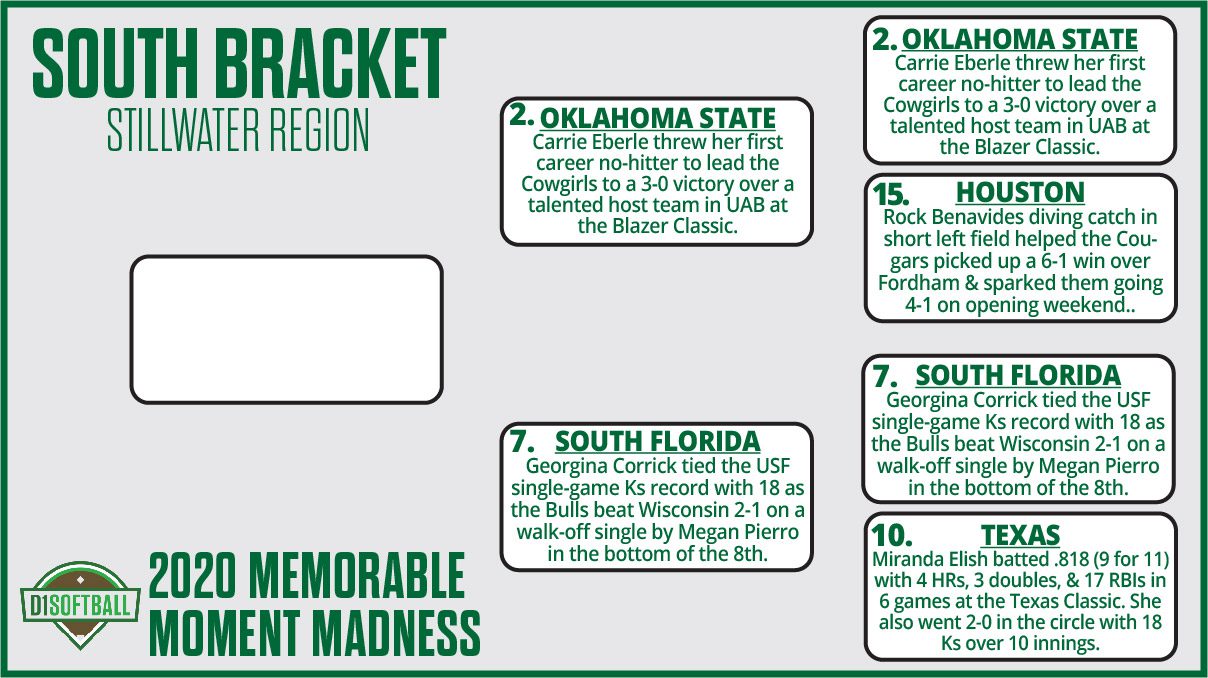 #2: Oklahoma State’s Carrie Eberle threw her first career no-hitter to lead the Cowgirls to a 3-0 vs. UAB

Oklahoma State senior Carrie Eberle threw her first career no-hitter to lead the Cowgirls to a 3-0 victory over host UAB at the Blazer Classic. The right-hander had five strikeouts and one walk to extend her streak without giving up an earned run to 33 straight innings. The 2019 ACC Pitcher of the Year while at Virginia Tech, Eberle is coming off her first Big 12 Pitcher of the Week honor.

Add another accolade to @georgecorrick‘s collection! She tied Erica Nunn for the program record with 1⃣8⃣ Ks against Wisconsin while posting an impressive final line in her third win of the weekend!#HornsUp 🤘 pic.twitter.com/1Zd9ls5vCO

Georgina Corrick tied the USF single-game strikeout record with 18 as the Bulls beat Wisconsin 2-1 on a walk-off single by Megan Pierro in the bottom of the eighth inning. Corrick gave up seven hits and no earned runs while walking two. 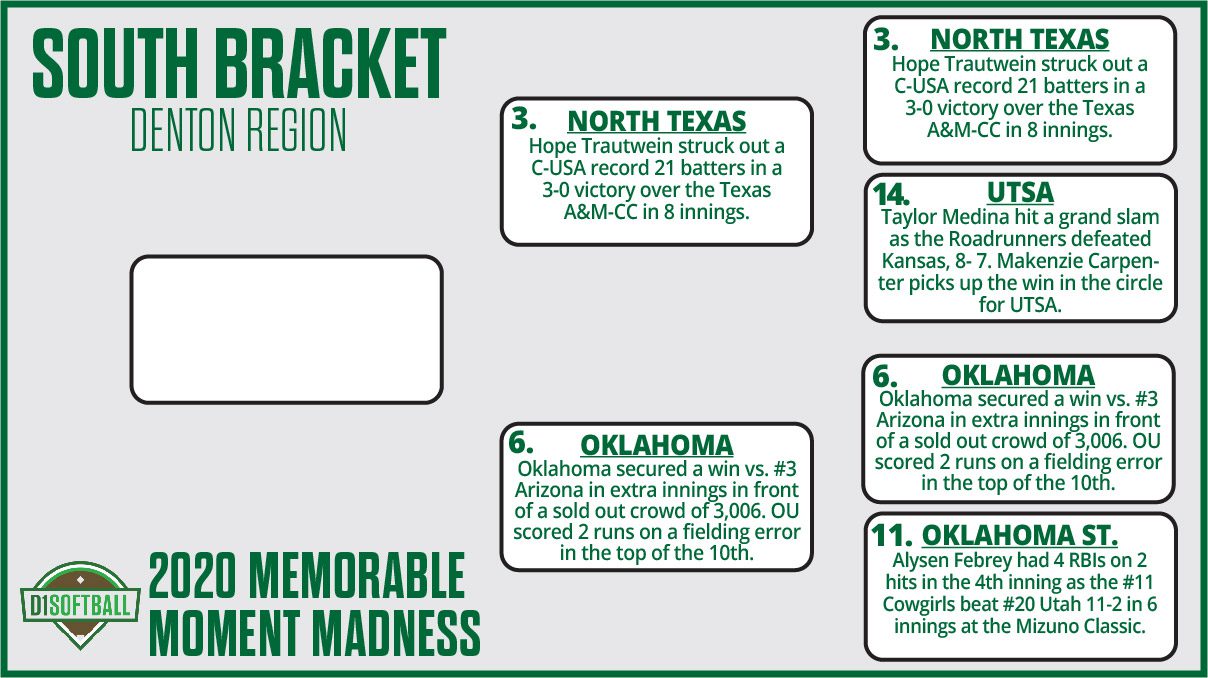 Texas A&M-Corpus Christi batters had absolutely no hope against University of North Texas pitcher Hope Trautwein. The junior right-hander struck out a record 21 batters in a 3-0 victory over the Islanders in eight innings. Trautwein’s 21 strikeouts was a single-game Conference USA record. The prodigious total boosted Trautwein’s career strikeout total to over 400, becoming the third Mean Green pitcher to reach the milestone.

Donihoo and Snow 𝙨𝙘𝙤𝙧𝙚 on the dropped ball in LF!

OU 6⃣, UA 4⃣ heading to the bottom of the tenth! pic.twitter.com/cQPJmuwEgR

Oklahoma bounced back with a victory over No. 3 Arizona in extra innings. Mariah Lopez (6-1) suffered her first loss of the season against her former team. The Sooners scored two runs on a fielding error in the top of the 10th inning to defeat the Wildcats in front of a sold-out crowd of 3,006. 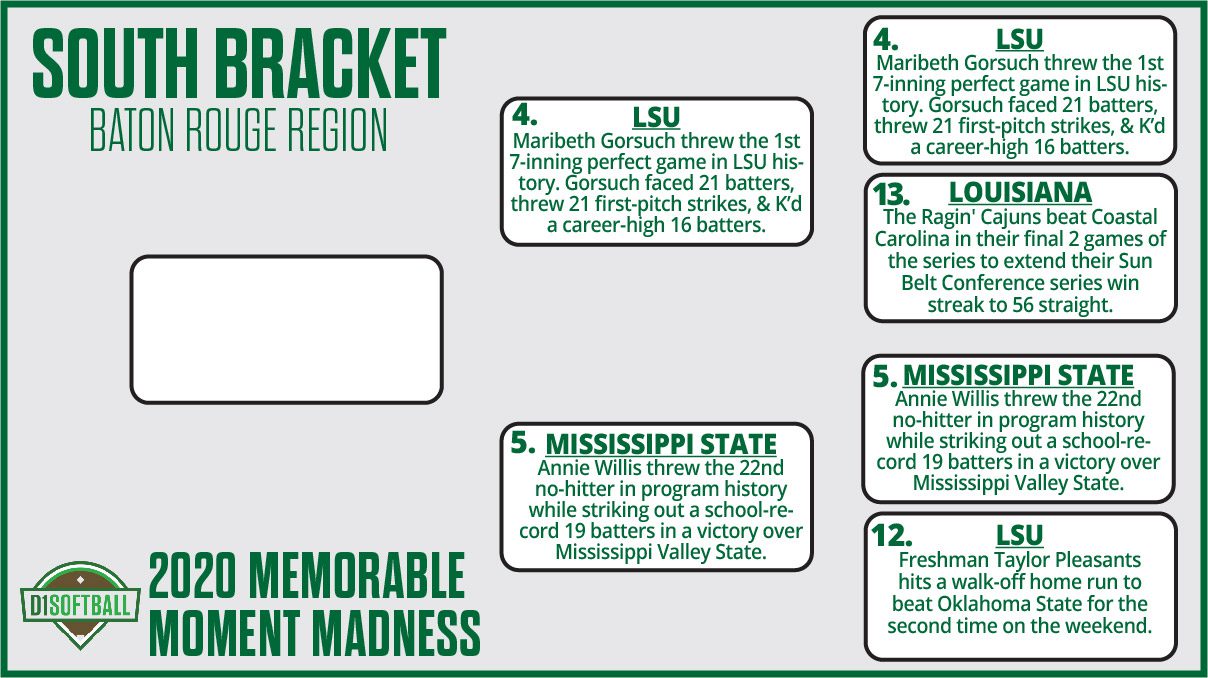 #5 Annie Willis throws the 22nd no-hitter in Mississippi State history while striking out a school-record 19 batters.

That’s our @SEC Pitcher of the Week!@annie_willis14 has thrown the 22nd NO-HITTER in school history with the help of a SCHOOL-RECORD 19 STRIKEOUTS!#HailState🐶 pic.twitter.com/K9qAZryC7a

Mississippi State junior Annie Willis flummoxed batters all weekend. The reigning SEC co-Pitcher of the Week struck out 12 batters in 6.2 IP on Sunday as MSU captured its fourth tournament title of the regular season with a 2-0 win over Southeast Missouri at Nusz Park. On Friday, Willis threw the 22nd no-hitter in program history while striking out a school-record 19 batters in a victory over Mississippi Valley State.

KEEP VOTING! (And make sure to follow us on social as well!)