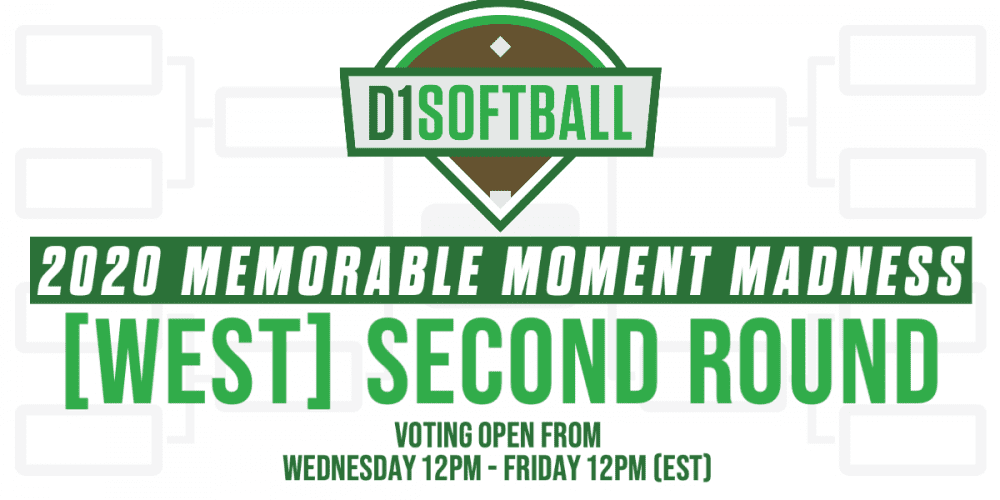 Remember, your not voting on the top teams, rather the Most Memorable Moments! There are four (4) ways to vote on your favorite moments from the 2020 season:

South Bracket – OPEN UNTIL THURSDAY AT 12:00 PM EST (WEBSITE ONLY) 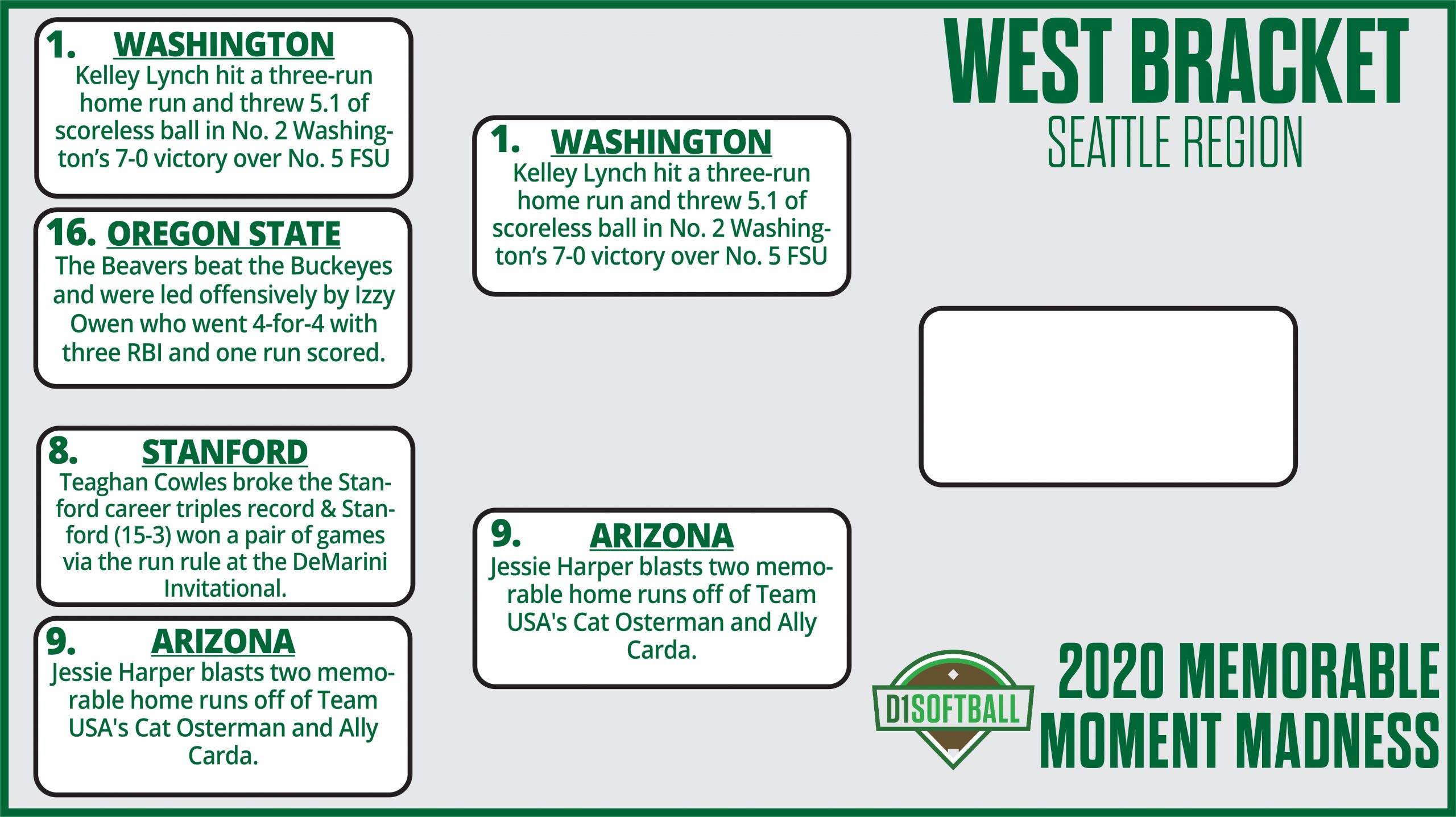 Kelley Lynch was dealing in game one! Game two, against Liberty, coming up in just over two hours.#MightyAreTheWomen pic.twitter.com/cLOVFUUvZB

Kelley Lynch hit a three-run home run and threw 5.1 of scoreless ball in No. 2 Washington’s 7-0 victory over No. 5 Florida State in Clearwater. Lynch became just the second Husky freshman ever to hit a home run and earn a shutout win.

THIS IS NOT A REPLAY

SHE DID IT AGAIN

Three-run #HarperHomer and it’s a 5-4 game in the fifth! pic.twitter.com/bWFtjQUq1C 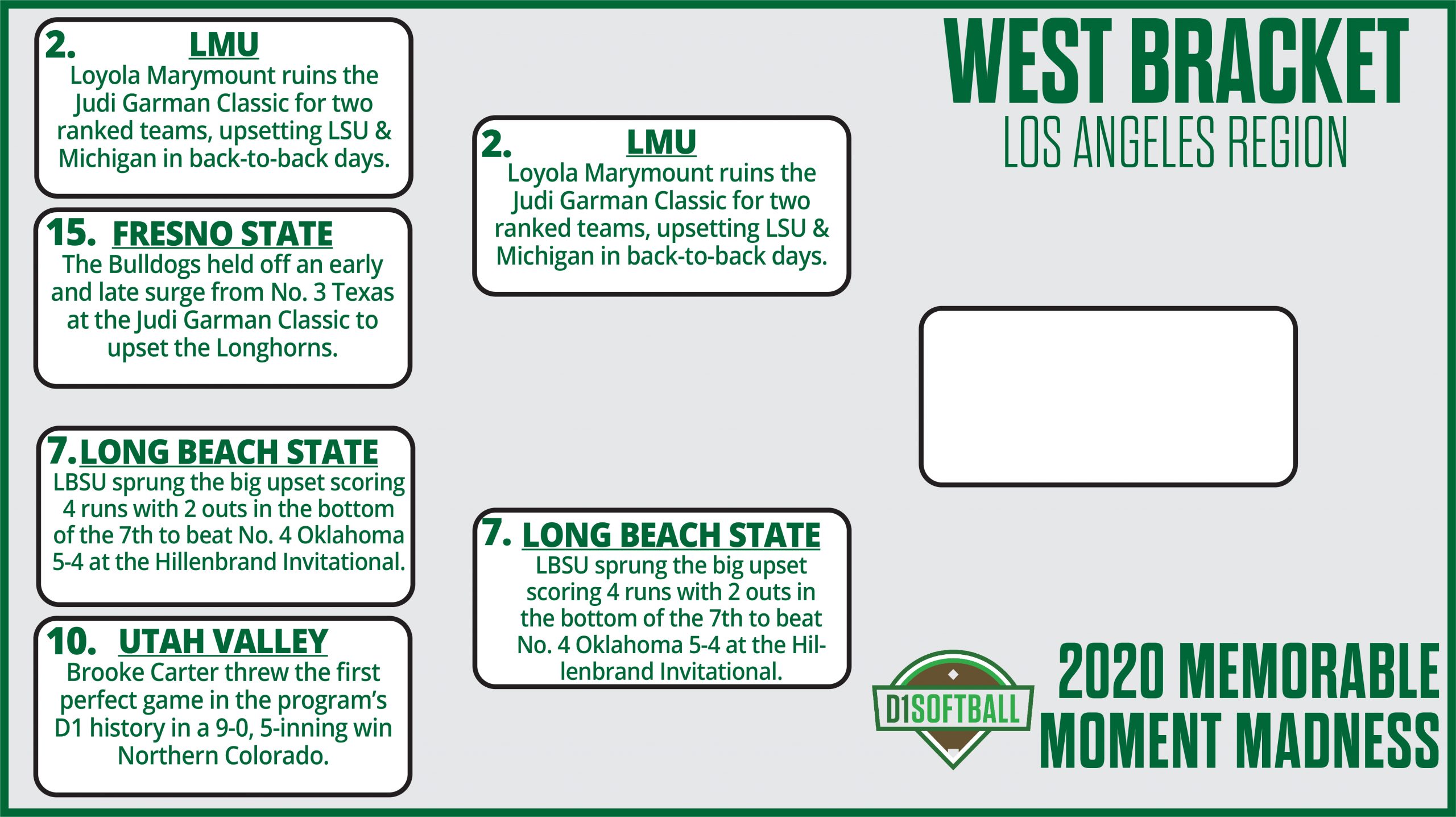 Our last out against No. 13 Michigan 🙃 #JoinThePride

After upsetting LSU to open the Judi Garman Classic on Thursday, LMU took down another Power 5 program by beating Michigan 2-1. The Lions scored two runs in the second inning on a Molly Grumbo singled to center field. Linnay Wilson was brilliant in the circle picking up the complete-game win for LMU.

#7 LBSU sprung the big upset scoring 4 runs with 2 outs in the bottom of the 7th to beat No. 4 Oklahoma.

Relive the moment as @ayoogonzo closes out a four-run rally to drop No. 2 Oklahoma! #GoBeach pic.twitter.com/xCyXpc1ncD

Long Beach State sprung the big upset scoring four runs with two outs in the bottom of the seventh to beat No. 4 Oklahoma 5-4 at the Hillenbrand Invitational in Arizona. Alyssa Gonzalez hit a two-run walk-off double to score Naomi Hernandez and Sydney McCollum and launch the celebration for the Beach 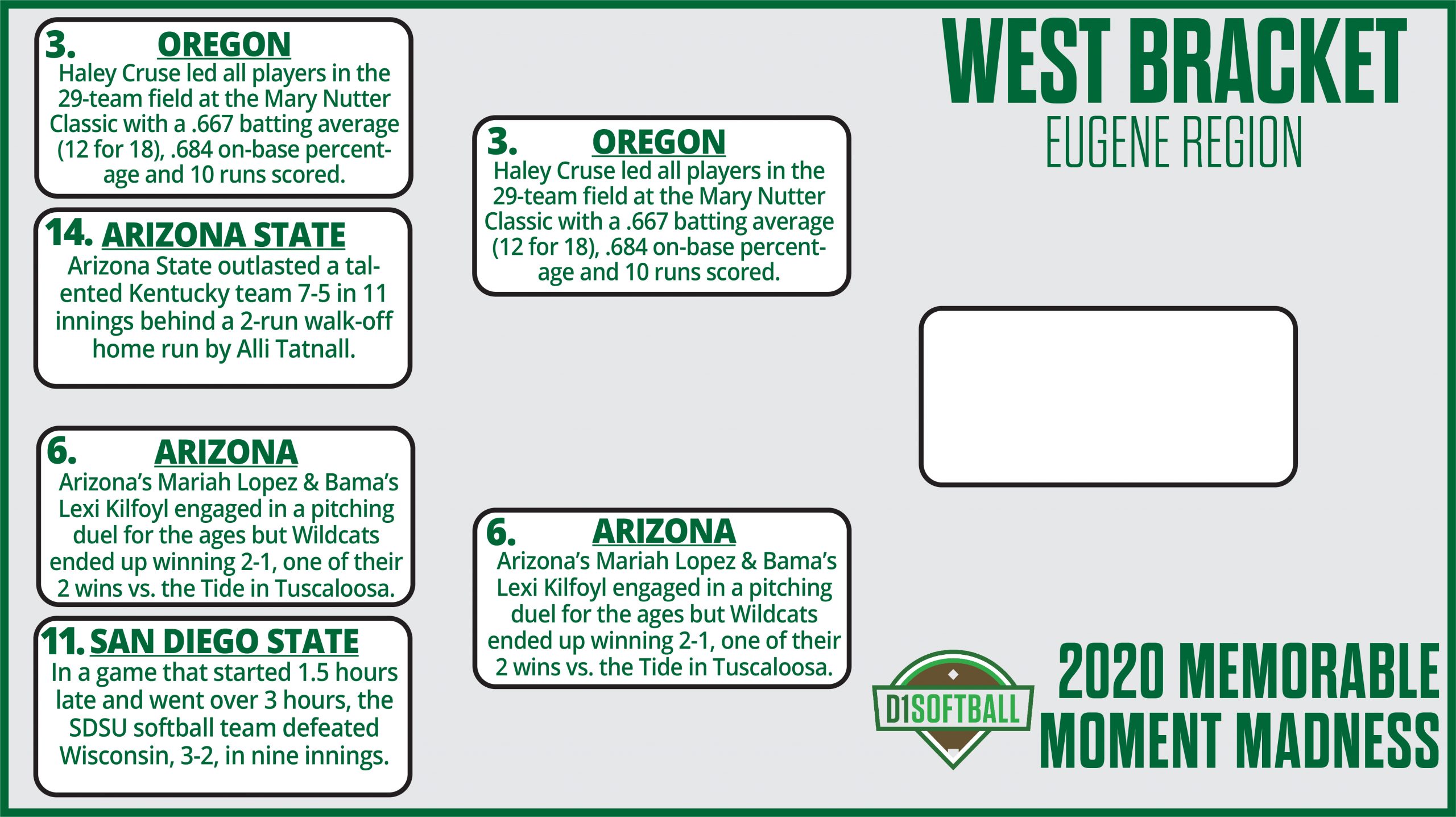 Huge weekend for @haley_crusee. She earns Pac-12 Player of the Week honors after putting up some crazy numbers at the @NutterClassic.

Oregon‘s Haley Cruse led all players in the 29-team field at the Mary Nutter Classic with a .667 batting average (12 for 18) and .684 on-base percentage and 10 runs scored. She also had six RBIs, two doubles and two triples, accounting for 16 of Oregon’s 39 runs scored over the weekend.

#6 The Wildcats pick up 2 wins against the Crimson Tide, highlighted by Arizona’s Mariah Lopez dominating performance in the circle.

The Wildcats pick up two wins on the road at Alabama – Arizona senior Mariah Lopez and Alabama freshman Lexi Kilfoyl engaged in a pitching duel at the Easton Crimson Classic. Alyssa Palomino-Cardoza’s go-ahead RBI in the seventh was the difference as No. 2 Arizona beat No. 10 Alabama 2-1 at Rhoads Stadium in Tuscaloosa. Lopez gave up seven hits while striking out nine and walking one. Kilfoyl allowed one earned run on four hits while striking out seven and walking five. 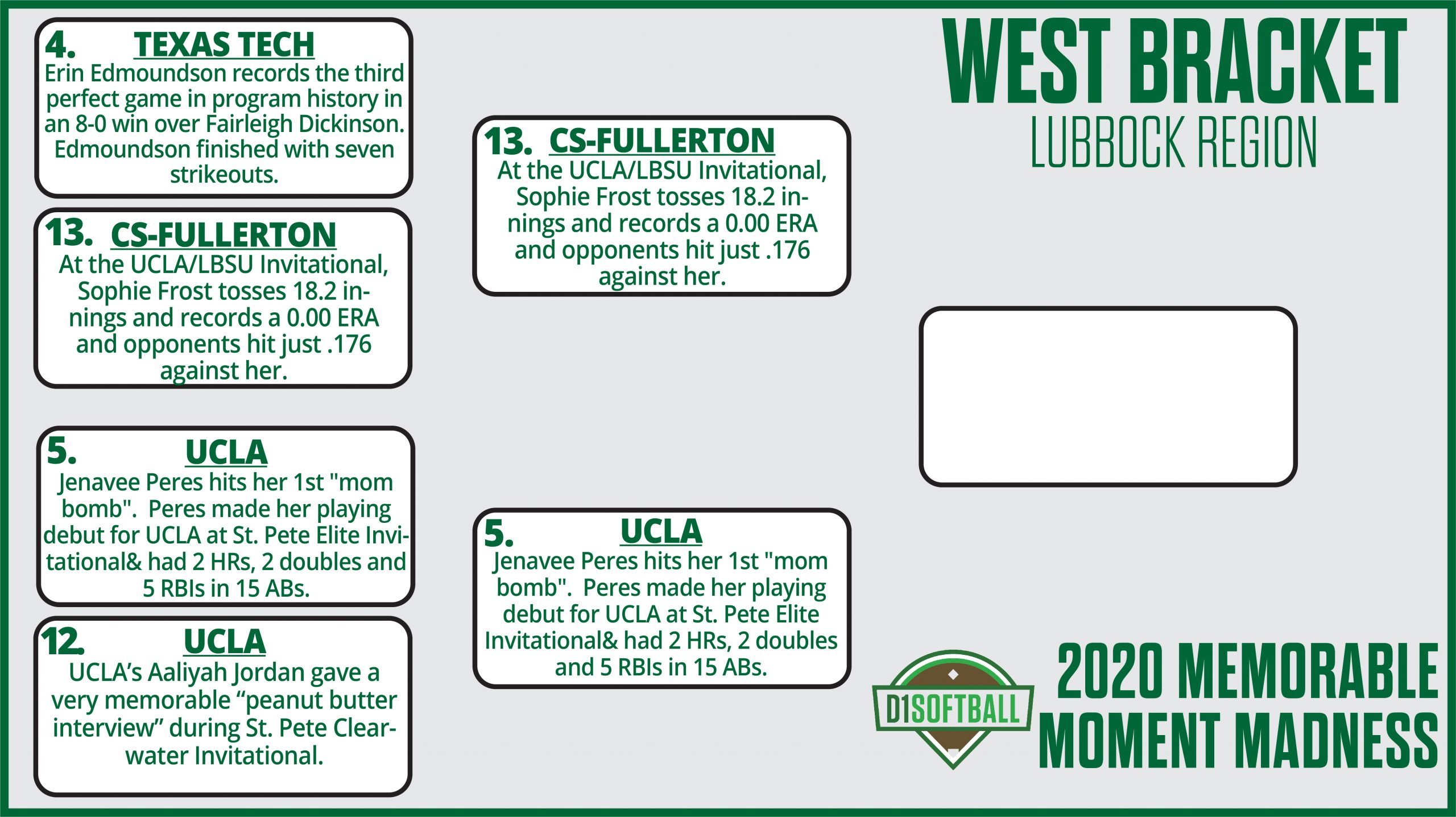 #13 At the UCLA/LBSU Invitational, Fullerton’s Sophie Frost tosses 18.2 innings and records a 0.00 ERA.

Never a doubt.@SophiaIsabellaa is your Big West Pitcher of the Week! #TusksUp

Competing at the UCLA/Long Beach State Invitational, Cal State Fullerton‘s Frost tossed 18.2 innings and recorded a 0.00 ERA as the three runs she allowed were unearned. Opponents hit just .176 against her.

Peres to left-center, her fourth of the season.

Jenavee Peres hits her first “mom bomb” against Alabama. Peres made her playing debut for UCLA at St. Pete Elite Invitational in Clearwater and had two home runs, two doubles and five RBIs in 15 at-bats.

KEEP VOTING! (And make sure to follow us on social as well!)