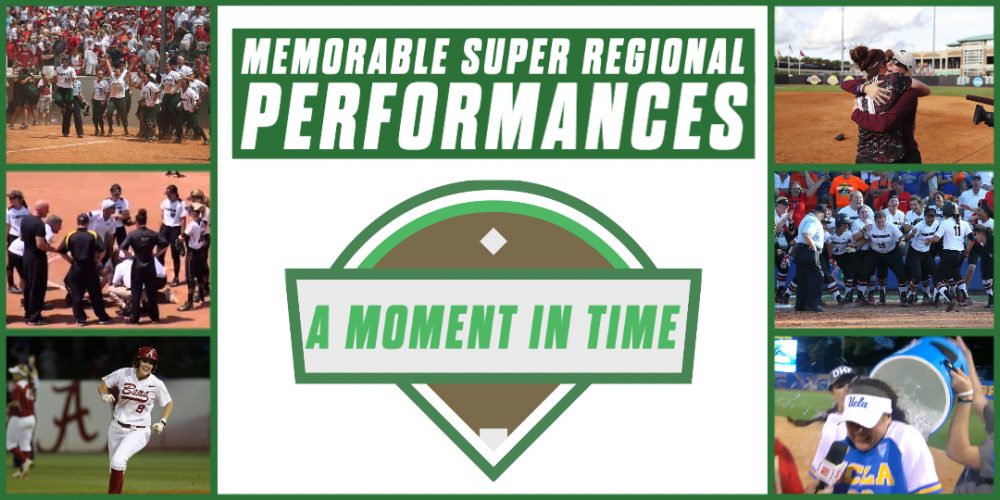 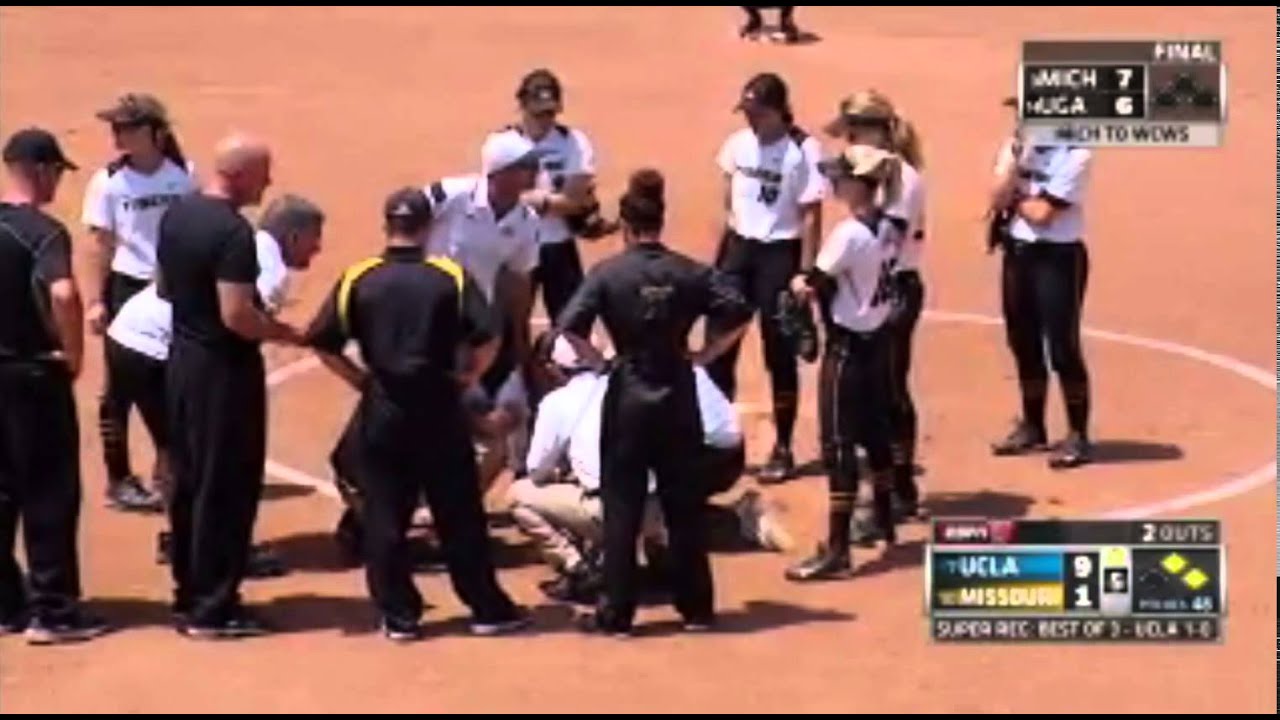 Missouri at UCLA in 2015. This was memorable because it was one of the scariest moments I have ever faced on the air. Tori Finucane was the Missouri ace and they were giving home team UCLA all they could handle when a line drive up the middle hit Finucane in the face. She crumpled to the ground and we were all terrified for her. An ambulance was there to take her to the hospital and it was very difficult to continue the broadcast. I think I started crying on the air and was trying to mask that emotion in my voice. We were all shaken. Tori was an amazing pitcher and I know it was difficult for her to ever fully recover from this experience. I believe the doctors told her she was millimeters away from a possible deadly blow. It was very upsetting to all who were there.

Marisa Runyon and Alabama eliminating Oklahoma and ending Lauren Chamberlain’s career. Runyon was struggling and came up huge with her sixth-inning go-ahead grand slam in the 5-3 series-clinching win. She was a lefty that drove it out of the park. It was such an epic battle with Paige Parker going up against Alexis Osorio and it was at the Rhoads House in Tuscaloosa. They were both teams that could have been easily playing in the Women’s College World Series, especially with superstars on each team. Parker did such a great job, and she later admitted that loss fueled her desire to win a championship in the future.

GRAND SLAM! Marisa Runyon answers back for the Tide! Alabama up 5-3 as we head to the 7th! #d1softball pic.twitter.com/Bic8ciZNsZ

Hawaii hitting an NCAA record 158 home runs in 2010 and upsetting Alabama in Tuscaloosa. That was before bat testing came into effect the following year. They were a No. 16 seed and Alabama was a No. 1 seed and they just kept hitting bombs. I think that was a series nobody anticipated being that exciting and of course Hawaii ended up coming out on top.

The Kaylee Puailoa walk-off home run to help Georgia upset Florida in 2016. It’s difficult to win a Super Regional on the road, and Florida was back-to-back national champions. The shock and awe of the defeat itself was something, but how it was done with a pinch hitter coming in to end the series made it stand out even more. Adding to it, Puailoa hit the home run on an 0-2 count with two outs and she was a senior. Unbelievable.

Pinch hit walk-off HR for @UGASoftball Kaylee Puailoa to knock out the #1 Seed and advance to the WCWS #RoadtoWCWShttps://t.co/7RTkRXu98f

For a personal memory, I pitched with a helmet on in my postseason pitching debut as a freshman at Texas A&M in 2005. I got hit in the head before the Big 12 Tournament and missed the regional. I came back in the Super Regional and the only way I could pitch was if I wore a helmet. I did OK. I didn’t do great. We lost by a run and I gave up three or four runs. I have a picture of it and everything.

I could mention all of the moments already listed since all were equally memorable for me. But I’ll go to a Super Regional I covered in 2017 when Texas A&M beat Tennessee in Knoxville. Texas A&M pitcher Trinity Harrington missed the regional round because her father, Eric, died of cancer back home in Colorado. But she returned to help the Aggies rally to beat the Lady Vols, starting back-to-back wins in the final two games. Harrington wasn’t perfect. She gave up hits, she gave up runs, she fell into holes. But she was resilient, and she was inspiring. The emotional scene once the Aggies clinched a spot in the WCWS for the first time in nearly a decade was uplifting. Harrington honored her dad in the best way she knew possible. She battled for her teammates.

Aggie softball headed to the WCWS for the first time since ’08. Trinity Harrington throws complete game a week after losing father. Wow. 👍🏼 pic.twitter.com/4nWV0OJWPq

I am going to be a homer on this one. The 2018 Los Angeles Super Regional between UCLA and Arizona was epic. The Pac-12 powerhouses met in a super regional for the first time in history and it did not disappoint. The series was unique because alumni from both sides showed up big. There was a war in the stands and on the field. The entire series felt like OKC as the Bruins blasted four home runs in Game 1 and Arizona’s Alyssa Palomino-Cordoza homered in the first inning of Game 2 to go up 2-0. The “Can’t Pop This” shirts were made by Jen Schroder for the Bruin bubble that year.