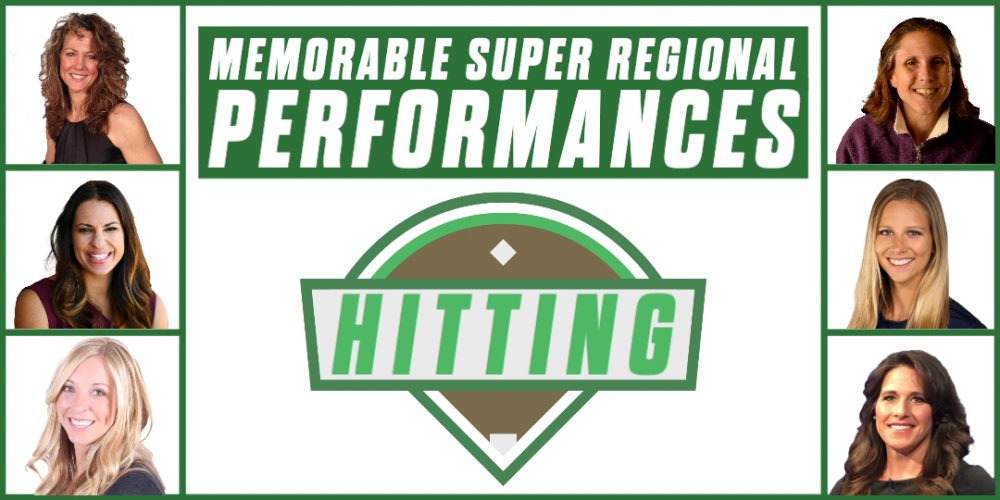 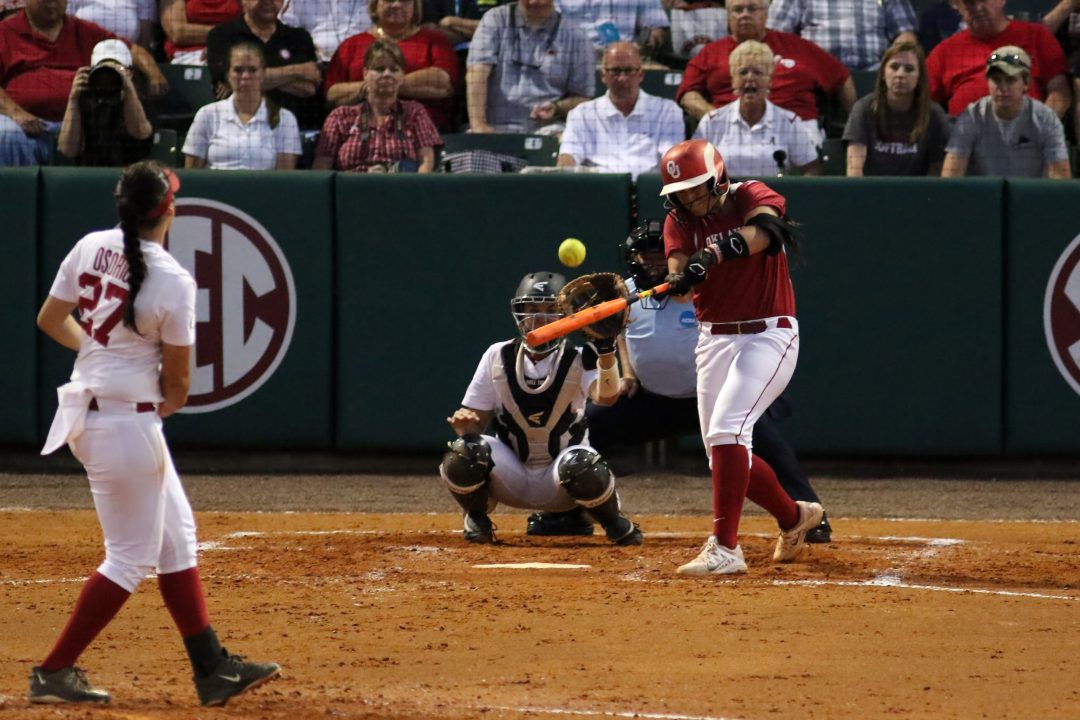 Lauren Chamberlain when she ended her career for Oklahoma in the Supers at Alabama in 2015. That Super Regional was unbelievably epic because you were watching one of the greatest hitters you will ever see in the college game do her thing. I feel like the script was written with the home run leader sending her team to the World Series, but Marisa Runyon of all hitters just laid into one and ended Chamberlain’s career with her go-head sixth-inning grand slam in Game 3. All three of Chamberlain’s hits in the Super Regional were home runs, including two homers in the final game. The atmosphere was amazing because Tuscaloosa has probably the best softball fans of any stadium that I have ever been to. Rhoads Stadium fans are unbelievable, and it made for great TV.

Jenna Rodriguez for Hawaii. She hit a two-run walk-off at Alabama in 2010. Alabama was going to win that and go to the World Series and this kid rifles a ball down the left-field line. At first, everyone was wondering whether it would be fair or foul and it went right over the foul pole and the entire stadium was just quiet. It was shocking because Hawaii was the No. 16 seed and Alabama was the No. 1 seed. But Hawaii had all those home runs that year and all speculation about if the bats were hot. It was just an amazing hit in a big spot.

Kaylee Puailoa’s walk-off home run for Georgia at Florida in 2016. The reason why this sticks out to me is throughout the season Georgia head coach Lu Harris-Champer had put Puailoa in pinch-hitting situations where maybe they were eight runs up or down – not typical pinch-hitting situations – so when the time came she would know Puailoa was prepared to come through. I was sitting on my couch with my husband when Coach Lu sent her up to pinch-hit in the Super Regional and I told my husband Coach Lu had been preparing this girl for this moment the entire season. Sure enough, the very next pitch she goes yard. I was losing my mind in the living room and my husband was like, “Did you really just call that?” Being a pinch hitter is hard enough as it is, but to be able to come into that moment as confident as she did really stuck out to me.

Kaylee Puailoa’s home run in 2016 was my most memorable hit of all Super Regionals. Georgia taking on the back-to-back defending national champion Gators at their home field in Florida. Down to their last out, down by one run, Coach Harris-Champer chooses to put in a pinch hitter, Puailoa, who comes away with a home run to not only knock off Florida at home but also prevent them from heading back to OKC to defend their title.

I can’t believe how many home runs were hit in the opening game of the Super Regional between Auburn and Louisiana in 2015. I remember watching from my Super Regional in Michigan and being in disbelief about what was going on. Louisiana hit four home runs and Auburn hit two home runs. Auburn rallied to win 12-11 in eight innings and clinched the program’s first appearance in the Women’s College World Series by winning Game 2 the next day. 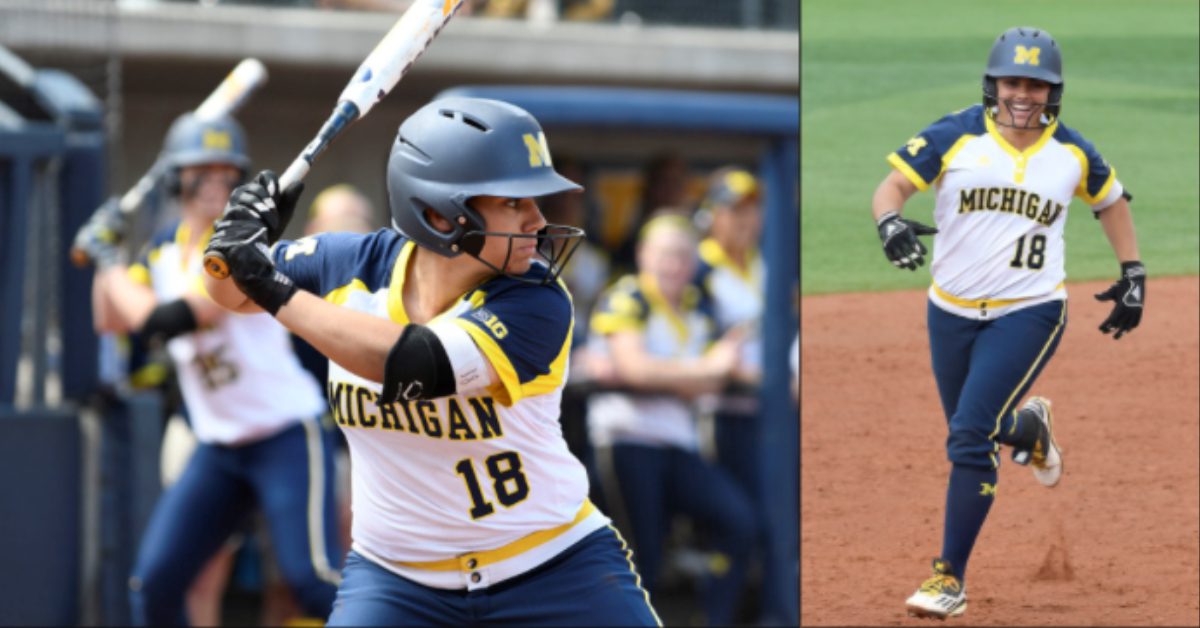 Hitting and being hit come to mind when I think of Michigan’s Lindsay Montemarano’s performance in the 2016 Super Regional against Missouri. The preferred walk-on from New York was 5-foot-3 but played much bigger. She homered in both wins over Missouri, but it was her reaction to taking a ball in the back to bring home a run that resonated. Montemarano dropped her bat, looked into the UM dugout and screamed “Let’s go!” It came from a player who thought her college dreams may end when she herniated a disc in her back in high school. But she had two rods, four screws, two hooks and a titanium disc implanted in her lower back and fought through surgical complications and rehab to help the Wolverines reach the WCWS.

Mindy Cowles’ grand slam against Northwestern to solidify the Sun Devil’s trip to the 2008 WCWS. Cowles was the current home run leader (60) at the time but didn’t get as much attention behind Kaitlin Cochran and Katie Burkhart. I remember her swinging at a change on the first pitch and missing badly and then hit the next pitch out. ASU won the national championship that year and I believe that moment sparked a fire in the entire team. Cowles was quoted after the game about their third trip to OKC, “The other years we went to Oklahoma City knowing we were there with seven great teams. This year we think we are the great team, that we are the one. Our attitude has changed from previous years.”