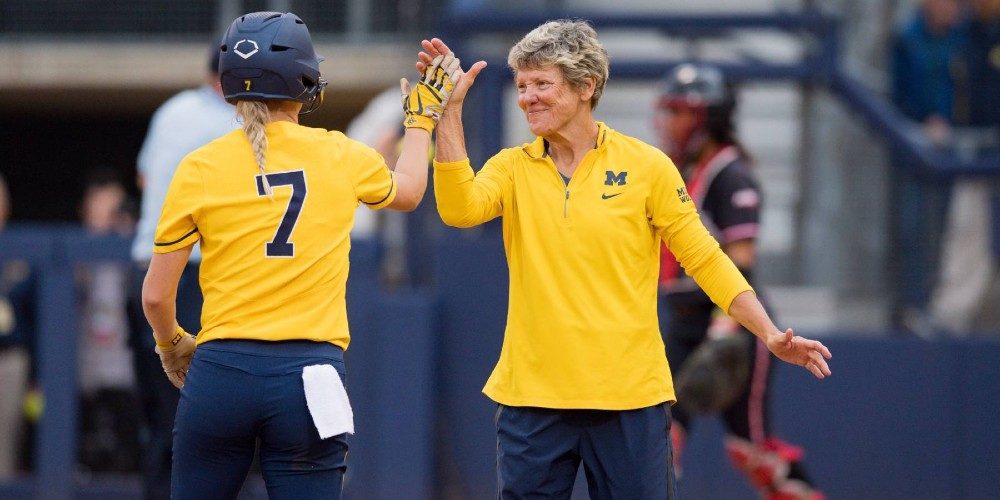 It would have been easy to remember when Carol Hutchins decided to step away from coaching college softball sheerly because of the force of her legacy.

But Hutchins couldn’t have picked a more fitting year. Hutchins is leaving her post at the University of Michigan on the 50th anniversary of Title IX. From her playing career to her coaching career to her relentless advocacy, nobody serves as a better symbol for female sports empowerment than Hutchins.

The iconic coach universally known as “Hutch” announced her retirement on Wednesday after 38 seasons leading the Wolverines. She is going out on top as the winningest coach in NCAA history with 1,707 victories and a career winning percentage of .755 in 39 seasons overall.

Hutchins built the Michigan program into a national power in a part of the country where the sport doesn’t usually thrive. The Wolverines became the first program east of the Mississippi River to capture an NCAA title when they were crowned champions in 2005.

But her legacy goes far beyond wins and titles. There were few better human beings in the sport and nobody cared more about its growth.

Hutchins never got to play organized team sports in high school. She was in 10th grade in 1972 when Title IX was passed, the landmark law that banned discrimination on the basis of sex in federally funded education programs.

She received a $300 scholarship to attend Michigan State, where she was a two-sport star in basketball and softball (1976-79). As a freshman, she helped lead the Spartans to the 1976 AIAW national softball championship. The team bussed to Omaha for the title game and received a $5 a day per diem for meals.

Hutchins, who was paid $3,000 for her first coaching job, lived through the inequities and made it her mission to ensure other female athletes and coaches in any sport were treated far better.

Throughout the years working on various stories, I would ask to speak with coaches. Some took days or weeks to return a call. Some never did. Hutch always responded within minutes if she could.

She knew the publicity, however big or small, would help grow the sport. She realized her seniority allowed her to speak about issues that other coaches with less security may shy away from in fear of losing their job.

It’s one reason Hutchins was the perfect selection in 2016 as the inaugural recipient of the espnW’s Pat Summitt Coaching Award, presented to the coach who exemplifies the character and courage of the late legendary Tennessee Lady Vols basketball coach.

As successful as she was, Hutchins was just as humble.

She deflected any credit, always wanting to shine the spotlight on her players or her loyal staff. She could talk for hours about what her players accomplished during their softball careers or after they graduated.

Teachers, lawyers, doctors, business owners – Hutchins took great pride in seeing them all use their Michigan education to become strong women and make an impact in the world.

Giving back was always at the forefront of her mind. Hutchins fielded thousands of phone calls from young coaches seeking advice and attended hundreds of clinics to help teach the sport to the next generation.

She founded the Michigan Softball Academy to raise money for breast cancer awareness, and has donated $1.5 million to the American Cancer Society since the program formed in 2007.

As the transfer portal, NIL and conference realignment bring sweeping changes to the college landscape, Hutchins joins a wave of legendary coaches stepping away in the last two years, including Mike Candrea, Lu Harris-Champer and Ralph Weekly.

The winningest coach – male or female – Michigan athletics history, Hutchins produced a string of All-Americans and a fruitful coaching tree with branches spanning all levels across the country.

Retirement will give Hutch more time to walk her dogs, play golf and bask in the beauty of the outdoors. She won’t need to pester Delta as much on Twitter about travel delays.

If you scroll through social media today, you will see #ThankYouHutch filling your timeline.

Hopefully, Hutch can read the tributes as she’s sitting by a lake with a cold beverage enjoying time off she has more than earned.

No amount of words can ever thank Hutch enough for what’s given to women’s sports.

Softball is losing an icon, but the game is now far richer because she was in it.