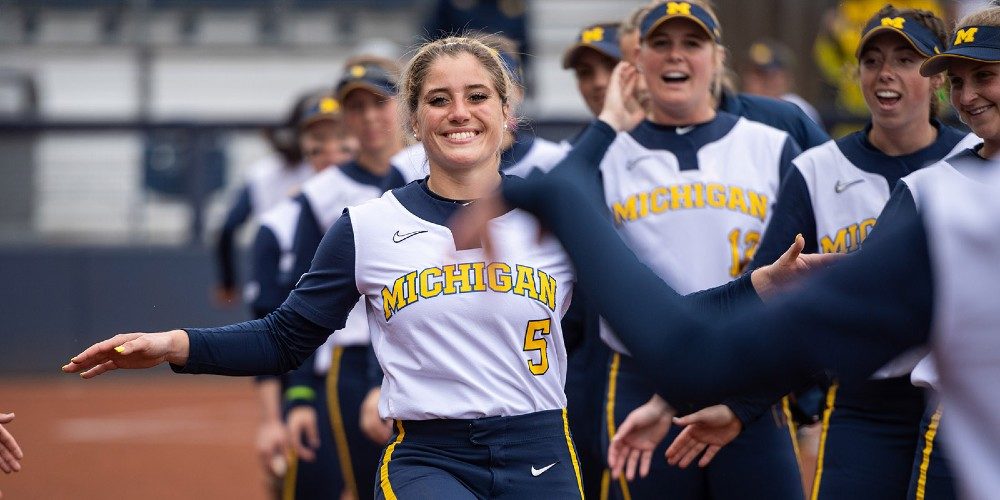 Everyone kept telling Kaylee Rodriguez it was probably just a hip flexor injury. The Michigan junior infielder started experiencing pain last March and tried to get relief through rehabilitation and stretching.

But after many sleepless nights with radiating pain down her left leg, Rodriguez believed the diagnosis was something more serious.

She could hardly walk without being medicated all day, and eventually had to visit the emergency room twice when she returned home to Miami.

“They asked me if I was an athlete and I felt bad saying yes because I already knew what they would say. It would not get me an imaging test because they would say it was a hip flexor strain,” Rodriguez said. “I had been hearing that for months. But I know my body and I knew something was wrong.”

Once Rodriguez returned to Michigan in September, she received an x-ray and MRI. She arrived for her test results a few days later and was stunned to learn she had Ewing sarcoma, a rare type of cancer that occurs in the bones or in the soft tissue around the bones.

Rodriguez has two tumors in her left hip. The cancer is localized. According to the American Cancer Society, the overall five-year survival rate for localized Ewing sarcoma is 82 percent.

“The doctor starts talking to me about other stuff I had going on before and then she just tells me I have a tumor,” Rodriguez said. “Never in a million years would I think it was cancer. Obviously, being there by myself, the first thing I think about is telling my parents and how hard that is going to be because we just got out of this.”

Last year, Rodriguez’s younger brother, Keanu, battled cancer. He was diagnosed at age 16 with Burkitt lymphoma, a rare but highly aggressive B-cell non-Hodgkin lymphoma, when a lump was discovered on the left side of his neck. Keanu, a high school senior who plays baseball at Florida Christian, is about to reach the one-year mark of remission.

“For me, the best day of my life was seeing him ring that bell,” Rodriguez said. “That is what I am ultimately waiting for now.”

Rodriguez is in the middle of three cycles of chemotherapy. She is being treated in Miami by the same oncologist who treated her brother. Once the treatment is complete, they will determine what type of surgery is needed to remove the remainder of the cancer from her upper left femur.

“My oncologist is amazing. He is the reason why I don’t stress about a lot of this,” Rodriguez said about Guillermo De Angulo. “He is the first doctor that gave me his actual phone number. My mom texted him once we found out about my cancer and within 10 minutes he replied back and gave us the kind of support we really needed at that time. I trust my life with him and I truly mean that.”

A GoFundMe account was created to help Rodriguez’s family with her medical expenses. Michigan’s M-Den has been selling a “Kaylee Strong” T-shirt to benefit Rodriguez, with all proceeds donated to the GoFundMe.

They all shared photos on social media of them wearing the shirts to generate more attention to Rodriguez’s cancer fight. Rodriguez grew up in the Miami area with Howard’s son, Jace.

“I really believe this is a cause everyone at Michigan can get behind,” Hutchins said. “It is never something you want to hear, and I just want KRod to know we all have her back here and always will.”

The outpouring of support has “meant the world” to Rodriguez.

“It’s what has made this entire process easier, and it started from Day 1 that I got told the diagnosis,” said Rodriguez, who appeared in 39 games last season for Michigan. “My coaches, my team and the entire softball community down in Miami and at other universities have shown their love and support. It’s just amazing to see and really what makes me keep fighting.”

Rodriguez’s brother has been a source of inspiration and wisdom while she navigates her cancer treatment.

“It’s definitely easier having him in my corner,” she said. “He basically gave me a rundown of what to prepare for and what to look out for. The other thing he helped me out with was losing my hair. He knew that would be the worst part for me because I love my hair.”

Before Rodriguez began chemo, the long blonde hair that once flowed down her back became a short bob that she dyed red.

“Because for me mentally, I knew it would be easier to see red hair fall out than my actual blonde hair fall out,” Rodriguez said. “Once it got to the point where it was falling off and knotting up the rest of my hair, I told my mom, ‘Let’s just do the big chop.’ My brothers and my mom all teamed up to shave it down.”

The future of Rodriguez returning to play softball remains undetermined. Doctors told her she has three potential options for surgery to remove the remaining cancer once her chemo is complete.

“That is kind of the part of this whole process I haven’t really talked about. It was hard to hear and harder to think about it,” Rodriguez said. “But when I had my appointment with the surgeon, every single option he gave me he was telling me to not get my hopes up because in the long run your softball career is over. I took it with a grain of salt. I know there are always surgeries and comebacks. It has a lot to do with the person.”

Rodriguez refuses to give up on her belief she can return to the field. Being an athlete has helped her deal with the emotional toll of her condition.

“Growing up in softball, it’s been ingrained in me that I will have my bad days and my good days and I can’t let that define what the next day will bring,” she said. “I am definitely taking it one day at a time and controlling what I can control. I can’t control the fact that I have cancer. But I can control how I react to it.”

Regardless of what transpires, Rodriguez has no doubt she will return to Ann Arbor.

“Absolutely. The first conversation I had with Hutch, she asked me, ‘Are you coming back to Michigan?’ The only thing I had to say was, ‘Absolutely. Where else would I go?’” Rodriguez said. “I love it and that is my home, those are the teammates that I love and coaches that I love.”

During her stays in the hospital when she’s hooked up to machines pumping her body with chemicals, Rodriguez has found perspective by looking around at other patients who have it worse.

She hopes her fight may help another athlete in the future dealing with a similar situation.

“I want to bring awareness that it’s OK to speak about your pain,” she said. “We are trained to try to ignore little nicks and things we have sometimes. But it could be as serious as cancer and nobody knows their bodies better than you do.”