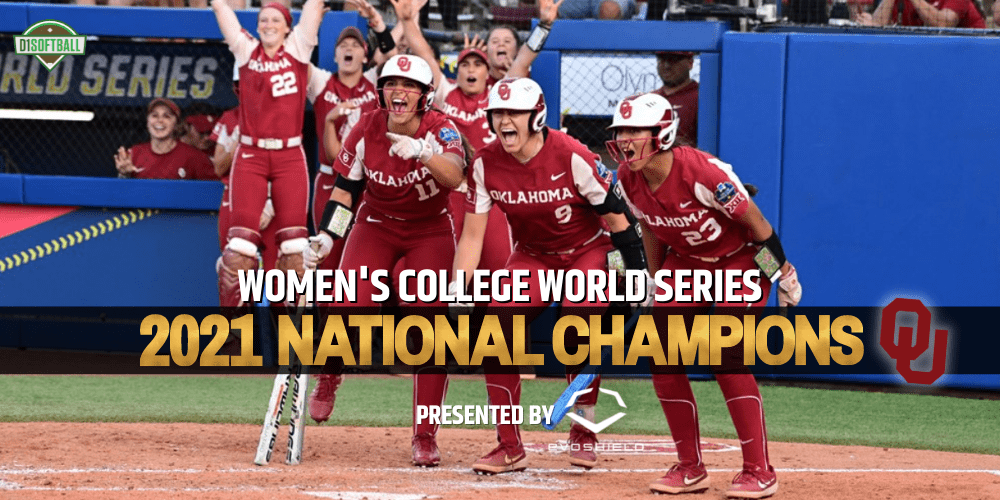 Nobody knew if teams would even make it to the end or if Covid would rob softball of another chance at crowning a champion.

But the sport pressed on with gratitude and grit. Power programs stood tall, underdogs had their day and newcomers captured the nation’s attention.

Not only did the season reach the end, it extended an extra day in a historical Women’s College World Series winner-take-all final played in front of a sold-out crowd at a newly-renovated USA Softball Hall of Fame Stadium in Oklahoma City.

Freshman Jayda Coleman drove in three runs and redshirt senior pitcher Giselle “G” Juarez threw a two-hitter as No. 1 Oklahoma captured the fifth national title in program history with a 5-1 victory over No. 10 Florida State on Thursday afternoon.

“I can’t believe I’m sitting here right now actually having this (national championship) hat on and this shirt. Like I knew I believed in this team that we were going to do it, but to actually do it, I just like want to cry,” Coleman said. “This is my dream, and to do it my freshman year, now I’ve just got to keep doing it, not give up and just keep working.”

It was the first time in WCWS history that both teams in the final climbed their way through the losers bracket after dropping their opening game to play for the title.

After not having a WCWS in 2020 because of Covid, the sport delivered a fitting gift to determine a champion by having all 17 games played for the first time in WCWS history and delivering record-breaking TV ratings.

On a scorching afternoon with temperatures on the field soaring above 100 degrees, Florida State started Danielle Watson and Oklahoma gave the ball to a rejuvenated Juarez.

Watson beat OU (56-4) in Game 1 on Tuesday while Juarez delivered FSU a loss in Game 2 on Wednesday to force the deciding game.

Joceyln Alo gave the Sooners (56-4) an early 1-0 lead with her second home run in as many games, a solo shot over the left field wall in the first inning.

Coleman hit another home run in the second inning with an opposite field solo shot for a 2-0 lead. The swing set a WCWS team record for home runs with 15. The powerful Sooners finished the season as the NCAA single-season home run record holders with 161.

“Jocey starting the game off like that was a big momentum shifter. Just for us to start, we needed momentum, we needed to get that, all right, like let’s go, like that’s going to be our spark type of thing,” Coleman said. “For her to come in and relay like what she’s seeing, what she’s feeling so we know how to feel like when we go up to bat, and it was huge for her to do that so early in the game and just start the pace for our first three.”

FSU (49-13-1) got a run back in the third inning when OU second baseman Tiare Jennings lost a pop fly in the sun and the ball dropped in the infield with two outs and allowed a run to score.

But OU’s potent offense had an immediate answer.

After a wild pitch by FSU reliever Emma Wilson with the bases loaded led to a run, Coleman delivered again. She belted a two-run double off the left field wall for a 5-1 lead.

Once Juarez induced a pop fly to herself for the final out, the Sooners dogpiled near the circle as the OU-dominated crowd filled the stadium with cheers. The Sooners lifted the title trophy high in the air and shared hugs on the infield dirt.

“Honestly I was kind of hoping it didn’t go in the sun and that they would let me catch it,” Juarez said of the title-securing out. “But I mean, it felt so slow motion, and then just to look up after I caught it and see (catcher Kinzie) Hansen running at me, surreal, awesome moment.”

Juarez entered the World Series with a 2.61 ERA and having not pitched much in the preceding rounds. She was still searching for comfort and confidence after recovering from bicep surgery last year. But the left-hander carried the Sooners in the circle in OKC, throwing back-to-back complete games in the championship series against FSU to earn Most Outstanding Player honors.

“I’m just overwhelmed with joy for that young lady because she was very diligent and fought through it and didn’t have her best season, and she would tell you that, but I don’t know that it matters right now to her because she had that moment in the course of about seven days,” OU head coach Patty Gasso said. “It caps off her career in the most ultimate way you could ever think of.”

Oklahoma, which won six elimination games, is the fourth team ever to lose its first game of the WCWS and capture the national title. FSU last did it in 2018.

The Seminoles nearly replicated their run in search of their second World Series crown, but couldn’t get enough hits and contain the OU offense in the final two games. As has become custom, FSU played its best softball during the postseason and gained experience that will benefit the returning players.

“When we get challenged next year, they’re going to look back at the senior class who stuck with it and just kind of keep working through the failures and keep appreciating the highs and lows because in the end it’s worth that, and they lived that, and they were here,” said FSU head coach Lonni Alameda, an OU graduate. “I know that’s going to be a great building block for us.”

The national title clash capped a season like no other in college softball, with teams enduring Covid restrictions and quarantines while forsaking family members and social gatherings for a chance to share the field with their teammates.

“I just don’t know that people understand how rough it was,” Gasso said. “I think every coach in the country could relate, where week by week you’re wondering who’s going to be at practice and who might not, whether they are contact traced and they’re out for two weeks, 10 days. It was really tough.”

But after knowing what it was like not to have any softball, the prevailing emotion across the country was gratitude for being back on the field and playing the game they love.

“I think ultimately at the end of the day, it’s a complete belief in one another. You can’t be resilient if you don’t believe in the person beside you, the person in front of you, the person behind you,” OU redshirt senior Nicole Mendes said. “If you don’t have that belief and that trust you’re not going to go anywhere.”