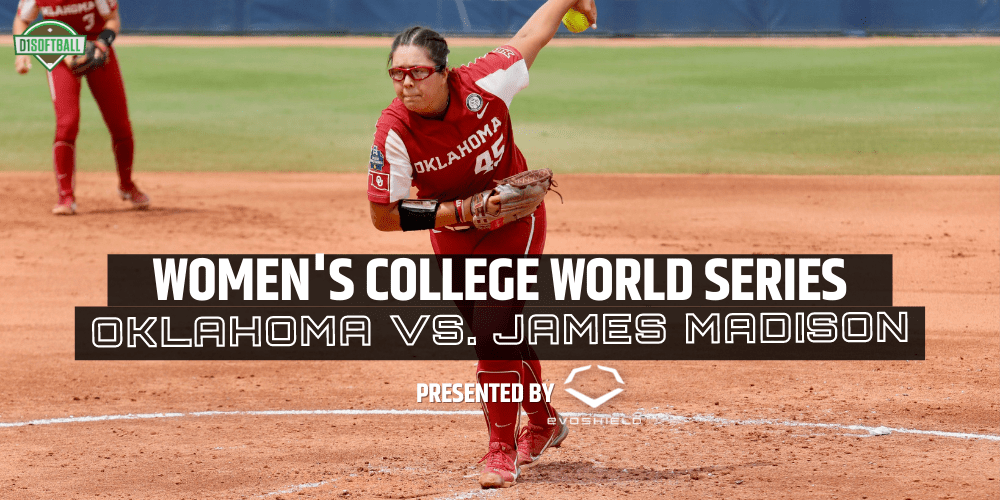 OKLAHOMA CITY – They took the more difficult route, but the Oklahoma Sooners ended up right where most expected them to be in the end – playing for the national title.

The top-seeded Sooners advanced to their second straight Women’s College World Series championship series by defeating JMU 7-1 in the opening game of “If Necessary” Monday at USA Softball Hall of Fame Stadium.

Oklahoma (60-3), which is attempting to win the program’s fifth national title, will play No. 10 Florida State – another team that clawed through the loser’s bracket – in the best-of-three final series, beginning Tuesday night at 7:30 p.m. ET. It will be the first time in WCWS history that two teams that lost Game 1 will compete for the national championship.

The Sooners lost to JMU in the WCWS opener, but got revenge by beating the Dukes twice in back-to-back days for their fourth straight elimination game win.

“I’m honestly star struck right now. This has been my dream ever since I was 12 years old and committing to this university, and I’m just so excited,” OU freshman Jayda Coleman said. “I can’t wait to go out there with my sisters and just give all we’ve got and just give all of our heart to the game that we love, and hopefully it just goes our way.”

OU’s Giselle “G” Juarez and JMU’s Odicci Alexander were locked in a pitching duel until the potent OU offense exploded for four runs in the bottom of the fifth inning to pull away.

The Sooners ended the feel-good story of JMU (41-4). Making their first appearance in the WCWS in program history, the Dukes were the first unseeded team to win their first two games in WCWS history. Their appearance on college softball’s biggest stage provided great publicity and a well-deserved spotlight for the established mid-major program

Alexander became a star, capturing the nation’s attention with her talent, swag and durability. The senior ace served as an inspiration to young players across the country, especially little Black girls that aspire to be pitchers.

Alexander was given a rousing standing ovation from the OU-heavy stadium crowd when she was pulled from the game in the fifth inning to leave the circle for the final time in her college career.

“It was amazing. It’s more than just a game,” Alexander said. “To see them all clapping for me and cheering me on, I mean, it was a great moment, and it warmed my heart.”

Oklahoma will attempt to do what Florida State last did in 2018 by climbing through the loser’s bracket to finish the WCWS clutching the national championship trophy.

“I’m really excited. We worked all year for this moment,” Juarez said. “To be one of two teams is amazing, and we’ve just got to keep playing our game and trusting each other. It feels amazing, but it’s been a grind.”

How it happened: On the very first pitch of the game, Kate Gordon hit a home run over the left-field fence off Juarez to give JMU the 1-0 lead.

But Juarez quickly settled down and didn’t allow another run for the remainder of the game.

OU’s offense finally stirred in the fourth inning when Nicole Mendes hit a lead-off triple to right-centerfield and scored on a wild pitch. Jana Johns gave the Sooners a 2-1 lead with an RBI single that dropped into short leftfield and scored Lynnsie Elam.

The potent Sooner attack exploded for four runs in the fifth, with Mackenzie Donihoo and Jayda Coleman each belting two-run doubles. Slugger Jocelyn Alo put the finishing touches on the win with her 32nd home run of the season to extend her own single-season program record.

The redshirt senior pitcher has reverted back to her pre-injury form of 2019 during this WCWS run. Juarez (21-1) threw another gem, allowing four hits while striking out 11 and walking only one batter.

It was Juarez’s third win of the WCWS. She has thrown 17.1 innings while allowing 10 hits and striking out 25.

“This is the best she’s been throwing all season the last week and a half, two weeks,” Gasso said. “She’s been throwing outstanding. Very proud of her and excited about what she can do in these next couple of days.”

Bigger than the game: JMU’s magical run through the NCAA tournament provided storylines that resonated far beyond softball.

Gasso became a fan of the Dukes and their coaching staff, and appreciates all they did to help grow the game.

“I think single handedly James Madison made our sport better because they brought a lot of people in that wanted to watch them,” Gasso said. “I think that’s the ultimate compliment I could give a coach and a program, and they were in.

JMU head coach Loren LaPorte was flattered by Gasso’s compliments and appreciative of what her program accomplished.

“Well, it means so much. To see the growth of our sport and to see a mid-major and a smaller school be able to do what we have done, I mean, good Lord, it’s just so exciting,” LaPorte said. “I think it just allows a lot of people to believe that it can get done. And I can tell you it’s not easy. There’s a lot of hard work that goes into it, and it’s a mindset. I’m just so proud of our team for not being intimidated at all.”

But it will be just a footnote to what she’s done throughout her career. Alexander’s legacy in the sport is secure, and her presence in OKC was a defining moment.

“Odicci is an incredible pitcher, but just an incredible athlete,” Gasso said. “Some of the players that she made I think forever will be in our minds just watching that squeeze play that she dove and made that play on against Oklahoma State. She is just a great competitor. It was honestly an honor to play against her.”

“Game recognizes game, and she is a baller,” Juarez said. “I have mad respect for her, and she gave everything she had and I think it’s really awesome that they did give her that standing ovation. She earned it. She deserves it. She’s worked hard, and I think she’s a competitor, and she did great this year.”

LaPorte said she was “trying to keep it together” when she made the walk to the circle to pull Alexander in the fifth inning.

“It was a perfect moment for everybody just to give her a standing ovation and just cheer for her,” LaPorte said. “I mean, it couldn’t have been a better moment, even though a lot of runs were scored. Just so happy what she was able to do for this team.”

Alexander was grateful for the chance to end her career at the WCWS and make history for JMU’s program.

“Honestly my 9-year-old self never would have thought I would have been here because I was on my couch watching this at this age,” Alexander said. “Just being here, I honestly have no words. But to people who are watching, I hope I inspired you to be yourself and be the best version of yourself.”

Next Up: Oklahoma advances to the championship series to play No. 10 Florida State. The series begins Tuesday at 7:30 p.m. ET (ESPN).