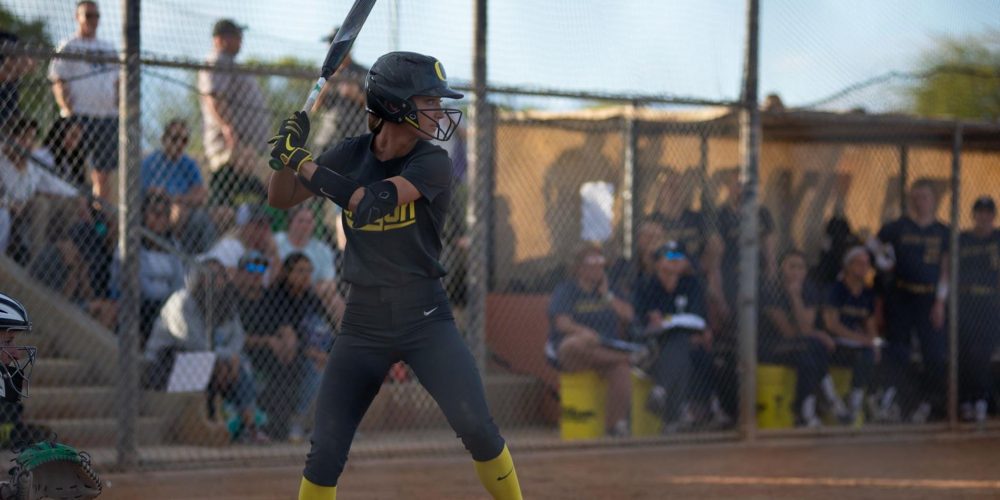 A three-hour contest ended just after midnight of Day 2 at the Mary Nutter Collegiate Classic (MNCC) between San Diego State and Wisconsin. Maggie Balint, the former Oregon Duck, was brilliant in the circle going nine innings giving up just two hits. Balint gave up a two-run home run in the first and shut down the Badger offense punching out 13. Wisconsin loaded the bases in the bottom of the ninth with a two-out walk only to be stifled by Balint with a game-ending strikeout.

Oregon’s Haley Cruse put up huge numbers thus far at the MNCC. She’s hitting .846 on the weekend with nine runs scored in four games. Cruse racked up multiple hits in every game, including a trio of three-hit games for the Ducks. The Ducks face Northwestern in their final contest of the weekend.

Patty Gasso knows how to win. In an afternoon matchup against Texas A&M, aggressive base running paid off for the Sooners. Oklahoma stranded 11 runners against the Aggies entering the bottom of the seventh. Tied 1-1, Grace Green walked and Gasso called a straight steal with two outs. Lyons doubled her home with a shot to center to end the game. Oklahoma went 2-0 on the day.

Florida (14-1) entered the weekend with one loss against ranked Michigan. The Gators picked up their first win over a ranked team on Friday, upsetting No. 4 Arizona. Riley Trlicek threw six innings in the circle keeping the Wildcats off balance to give way to Natalie Lugo in the seventh. Florida then went on to defeat Northwestern, 3-2.

Arizona’s Jessie Harper is on fire. Harper hit her fifth home run of the season against San Diego State on Friday, bringing her career total to 71. Florida intentionally walked Harper twice in Game 2 to face Hannah Martinez. Will Harper get enough chances to chase the record? The Wildcats split both Day 1 and 2 at the MNCC.

Kelley Lynch and the Huskies

Pitchers who hit, or hitters who pitch. The age old debate is alive and kicking as the Washington freshman Kelley Lynch blasted a two-run homer to walk-off on Wisconsin. Gabbie Plain tied her career with 15 K’s in the circle picking up the win for the Huskies.

UCLA’s Aaliyah Jordan hit her first home run against Texas A&M. The All-American has 18 RBIs on the season and is batting .600 with a .967 slugging percentage for the undefeated Bruins. Peanut butter or not, Jordan squares balls up harder than anyone at MNCC.