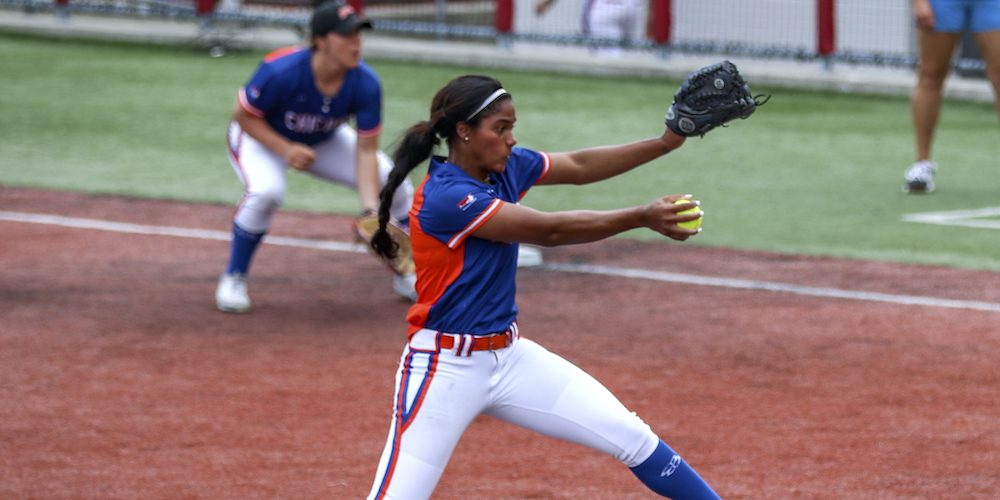 For as long as she can remember, the Women’s College World Series has been appointment viewing for Natasha Cloud.

The Washington Mystics guard just never imagined it would lead to a love connection.

Cloud first caught a glimpse of former University of Florida star Aleshia Ocasio while the Gators were playing in Oklahoma City.

“The camera doesn’t ever really leave the pitcher, and I thought, ‘Oh, she is fine. I like her,’” Cloud said. “I don’t think she had any idea who I was at that time.”

The social media match was made.

“I went into her profile and sent her a picture of herself and said, ‘I want to be on Cloud Nine.’ You can put that in quotations,” Ocasio said with a laugh. “She flew me out the next weekend to her game in Atlanta, so it all worked out.” 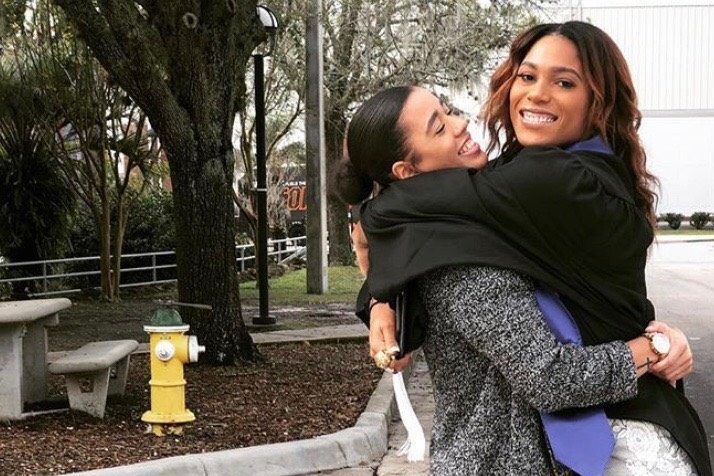 Ocasio, 23, and Cloud, 28, were engaged last summer, and recently bought a house outside of Philadelphia.

Normally forced to be apart while playing in different locations, they’ve been able to spend more time together than ever during the coronavirus pandemic as they wait for information on their respective seasons.

Ocasio is a member of the Chicago Bandits in the National Pro Fastpitch League and has joined the new Athletes Unlimited Softball League. The NPF announced last Friday that the 2020 season has been canceled, but Athletes Unlimited is still hoping to play August 17-September 27 in Rosemont, Ill.

The defending champion Mystics were supposed to play their WNBA opener last Saturday, but the season has been put on hold until the league determines if it can safely find a way to start.

Ocasio and Cloud have been trying to stay in shape and keep each other motivated to train during the shutdown, even if it means midnight workouts.

“We are competing in our activity log on our Apple watches,” Ocasio said. “There have been times when I don’t want to work out and seeing her working out gets my butt up off the couch.”

Ocasio and Cloud share a competitive drive that has been essential to their success. Being in a relationship with another top female athlete has enabled Cloud to elevate her own game.

“Aleshia is just a grinder and she challenges herself to be better. There is never really a comfort level for her,” Cloud said. “She is always pushing the boundaries to be that one percent better. It’s almost a Mamba mentality, and it influences me and motivates me to be better in a lot of different aspects of my career.”

Cloud has been able to help Ocasio perform on-field work to keep her ready to play. A Maryland graduate, Cloud was a third baseman in softball growing up in Pennsylvania and played some quarterback for a youth football team.

“She has a better arm than me,” Ocasio admitted.

“I think I am a great fungo hitter too,” Cloud added. “She might argue with that, but I give myself an A.”

Getting Ocasio to assist Cloud on the hardwood, however, is a tougher task.

“It’s not the prettiest thing,” Cloud said with a laugh. “All that athleticism that I brag about her kind of gets thrown out the window when she steps on the basketball court.”

“Whenever I am on the court, I am super unathletic,” Ocasio said. “The ball hits the floor before I even try to catch it. But I do what I can to help her by rebounding and stuff. I have started getting more familiar with the ins and outs of the game and rules after dating her and watching her. It’s a journey.”

As two high-level professional female athletes, Cloud and Ocasio frequently discuss how to advance women’s sports and provide better opportunities for players to earn a living.

The WNBA is far ahead of softball professional ambitions, yet still far behind most men’s sports. The WNBA recently agreed to a landmark collective bargaining agreement that improves salary, family planning, free agency and wellness of its players.

“The most important thing for us is to leave our leagues better than how we found them. We want to be part of that change,” Cloud said. “With the WNBA and our CBA, we might not necessarily reap all the benefits of it, but our goal was more focused on the next generation of women. We want our leagues to be a dream for them and be financially stable for them.”

Ocasio hopes Athletes Unlimited is a step in the right direction for professional softball, which has struggled to generate interest and financial backing over the years.

The minimum compensation for players is $10,000, which includes a base salary and guaranteed bonuses. The top players on the leaderboard have the potential to earn as much as $35,000, and all players involved in the league will also share in any long-term profits through 2041.

“I was pretty skeptical about it at first because it was a lot different than what I am used to,” Ocasio said, referring to the focus on individual success rather than team. “But I realized that it would be a great opportunity to be a part of something that might be revolutionary for the sport.”

Cloud is a player representative for the Mystics, and has urged Ocasio to take a bigger role in pushing for players to have more of a voice in softball.

“I constantly talk to Aleshia about forming a union. That has been our biggest protector in the WNBA,” Cloud said. “Having a union enables you to fight and discuss different issues within your league. Our WNBA has done a phenomenal job. I can’t speak more highly of what we have done and will continue to do.”

Along with having their domestic seasons overlap, Ocasio and Cloud both play overseas during the offseason to enable them to be financially stable. It’s not an easy balance when it comes to sustaining a committed relationship.

Ocasio was playing in Japan last summer while Cloud was helping lead the Mystics to the first WNBA title in organization history. The Mystics were locked in a tight WNBA Final series with the Connecticut Sun, and Ocasio was receiving updates during her own game.

“Our translator came into left field and said the coach wanted me to take my AirPods out,” Ocasio said. “I said, “No way. My fiance is playing in the biggest game of her life right now and I am not taking my AirPods out.”

Cloud did something similar when Ocasio was playing for the Bandits.

“I would be at halftime of my game and watching her game in Chicago on my phone,” Cloud said. “My coach would come in and I would have one headphone in and listening to him with the other ear.”

The financial impact of the pandemic is being felt across all sports, and many worry that women’s leagues will feel the most pain and undo the progress made following the success of events like the Women’s World Cup, which increased discussion about the inequities female athletes face.

Ocasio and Cloud are eager to get back on the field and the hardwood, respectfully, to keep pushing their sports forward while celebrating each other’s success. They both want more people to “bet on women” to show the next generation what is possible.