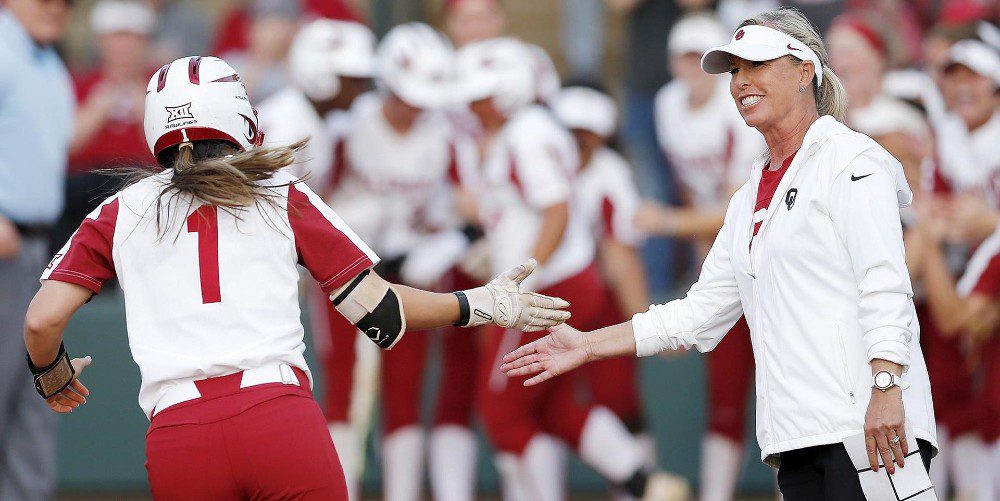 Patty Gasso was once again richly rewarded for her program’s success.

The University of Oklahoma announced at the Oklahoma Board of Regents meeting Gasso’s $1.625 million annual salary and new contract.

Gasso retains her title as the sport’s highest-paid college coach, and is the second-highest paid coach in all of softball or baseball. Vanderbilt’s Tim Corbin makes more than $2 million, and Gasso is tied with Ole Miss baseball coach Mike Bianco for next in line.

In 2017, Gasso signed a contract extension through 2024 with a $1 million annual guaranteed pay. Her salary was $725,000 with an annual stay bonus of $200,000. Gasso’s salary escalated over the $1 million mark because of bonuses stemming from the recent postseason success.

USA Today released a report in 2019 showing the average head coaching compensation in softball had increased by an average of almost 62 percent across the Power Five programs from 2013-2018, and 11 schools were paying more than $400,000.

The number has increased over the last few years, and much more is likely to come with conference realignment and media rights deals filling the coffers at Power Five schools.

Florida State head coach Lonni Alameda recently signed a contract extension with a salary of $550,000 that increases in $25,000 increments through 2029. The contract features $100,000 retention bonuses and longevity bonuses.

Entering her 28th season at Oklahoma, Gasso has built the two-time defending national champion Sooners into the most dominant program in college softball over the last decade.

Gasso has led OU to the Women’s College World Series 15 times during her tenure, and the Sooners have reached the postseason every season she’s been in Norman.

Gasso has led the Sooners to a conference-best 21 regular-season and tournament titles. She’s been named Big 12 Coach of the Year 14 times.

Under her tutelage, the Sooners have produced 70 All-Americans and 116 first-team all-conference selections.

Oklahoma is in the process of building a new facility with an approved budget of $42 million for Love’s Field. A groundbreaking ceremony is scheduled for September 23rd.

To date, more than $29 million of the $42 million has been raised for the project and has come from 850 donors, including the $12 million naming gift from Love’s Travel Stops.