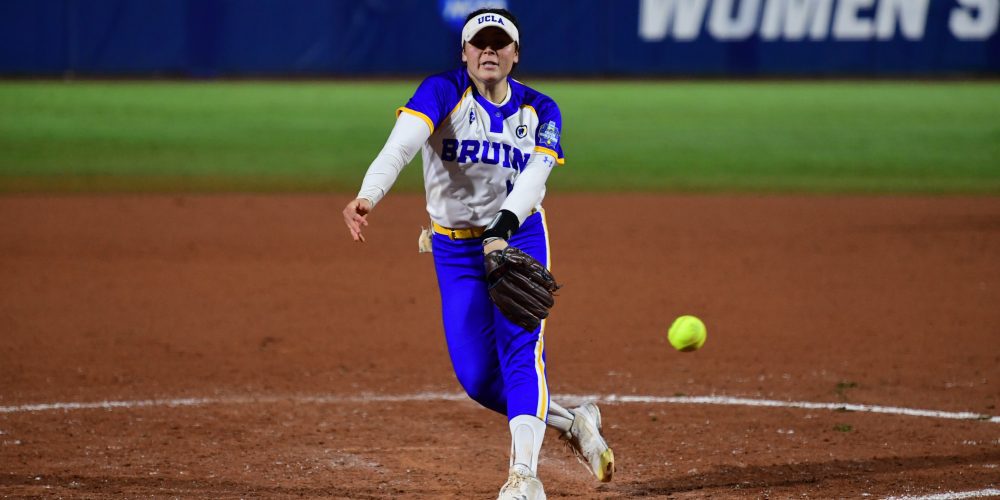 By the end of longest and most difficult reign any national champion ever had, spanning two years, UCLA simply didn’t have enough left. One too many miscues. One too many runners left on base. One too many Oklahoma Sooners hitting balls deep into the Oklahoma City night.

But darned if Rachel Garcia didn’t still make it seem possible for a minute.

Garcia made a lot of things seem possible again for the most successful program the sport has ever known.

Oklahoma eliminated UCLA from the Women’s College World Series with a resounding 10-3 win on Saturday, a day that traditionally is as much about saying goodbye as staying alive.

“I left everything out there on the field tonight, and I couldn’t be happier for this team,” Garcia said. “I mean, we’ve made it this far and this team is just something special.”

But lost in the final margin is the feeling that just about everyone, save perhaps Sooners fans, must have experienced to one degree or another when Garcia staked UCLA to a 3-0 lead with one swing of the bat and a home run in the third inning.

Is she going to do it again?

Just like she did with the walk-off home run that complemented her 10-inning shutout in the circle and sent the Bruins to the championship series in 2019? Just like she did with a walk-off hit when Team USA beat Japan in a 2018 WBSC World Championship semifinal and secured a place in the Olympics? Just like she has enough times in her career for Kelly Inouye-Perez to offer an assessment that would be blasphemous if offered by anyone other than UCLA’s coach and Lisa Fernandez’s lifelong teammate and friend.

“She’s a beast of a softball player,” Inouye-Perez said. “And she goes down to me as the best two-way player. I even talked to Lisa about it, like ‘Lisa, you’re pretty good, but Rachel has come up clutch offensively more than you ever did.’ …

“The highlight reel on Rachel Garcia is epic, and she will go down as the best.”

She couldn’t do it again this night. Not against Oklahoma’s relentless lineup and not without some help this week from Megan Faraimo, UCLA’s invaluable No. 2 pitcher who was absent from Oklahoma City because of an injury. But Garcia made it seem possible.

Creating a dynasty is difficult work. Living up to its standards is even more difficult. But perhaps the most difficult task of all is not only living up to the impossible expectations of past success but somehow exceeding them. Candace Parker did it for Tennessee women’s basketball. Maya Moore did it for UConn women’s basketball. Carli Lloyd, Megan Rapinoe, Becky Sauerbrunn and a generation of U.S. women’s national team players did it on the soccer field.

Each took a legendary team that wasn’t as successful as it once was — and could never be as successful as it was supposed to be — and somehow made it better. They transcended their sports in doing so. They became stars in the eyes of even those who didn’t root for their teams.

Garcia did that on the softball field. She made UCLA become UCLA again. Saturday didn’t change that.

“She was put in position to have to do it all but nobody blames her,” Inouye-Perez said of the exit against the Sooners. “She gave it all she had, and I told her ‘This is not about something that you have to prove. You have left your mark on the game. You have done it, you are going to continue to have a future.’ …

“I will take Rachel Garcia any day of the week.”

By the middle of the last decade, UCLA hadn’t quite reached Ozymandias levels of fallen glory. But the Bruins made three consecutive regional exits after winning a national title in 2010. That isn’t a calamity for most programs, but UCLA isn’t most programs. Most programs don’t have 12 NCAA championships and seven second-place finishes — through the 2010 title, UCLA literally played for a national championship more often than it didn’t.

When you start losing your regional home opener against Hofstra or getting knocked out of the tournament as an unseeded team by UAB, well, all empires eventually fall. Go read Shelley’s poem.

Nothing beside remains. Round the decay

Of that colossal wreck, boundless and bare

The lone and level sands stretch far away.

Garcia didn’t singlehandedly pull UCLA out of the drifting sands. She wasn’t yet on the roster when the Bruins made it back to the World Series in 2015. She wasn’t on the field when they returned to Oklahoma City in 2016. Her current USA teammate Ally Carda had a pretty big hand in that part of the story. But Garcia arrived at the right moment.

She didn’t even do it singlehandedly when she did get on the field and made four consecutive World Series appearances, although few players were ever better equipped to win games all by themselves. She wasn’t just a good enough hitter to keep in the lineup when she pitched. She was an All-American hitter worth keeping in the lineup no matter if she pitched. She leaves with a 1.026 career OPS and 42 home runs to balance a 98-15 record, 1.36 ERA and 975 strikeouts in the circle.

On top of everything else she accomplished, she singlehandedly ensured that the two-way pitcher remains part of the scene at increasingly specialization-obsessed Power 5 programs for another generation.

And she did it all with the class that made it hard to root against Goliath.

“Rachel is an amazing person,” said UCLA and Team USA teammate Bubba Nickles, whose own stellar UCLA career came to a close Saturday. “She knows this —I love her so much. It’s pretty incredible that I get to be with such a strong and hard-working person, and she’s such a role model to me. She is unfazed by any external noise. She is going to be amazing, whatever she does with her softball career. I’m just so blessed to have her as a teammate.”

It was striking Saturday how even Inouye-Perez seemed to want to savor the final moments of Garcia’s time with UCLA. She pulled her aside after taking her out of the game. The coach said afterward she wanted to let Garcia know no one blamed her. That she had done enough. More than enough.

“Everybody in the world expects Rachel just to do Rachel and just to stop everyone and be that person,” Inouye-Perez said. “She’s more than a softball player to me.”

She was more than a softball player to softball, too. It’s why she left Saturday with nothing left to prove.