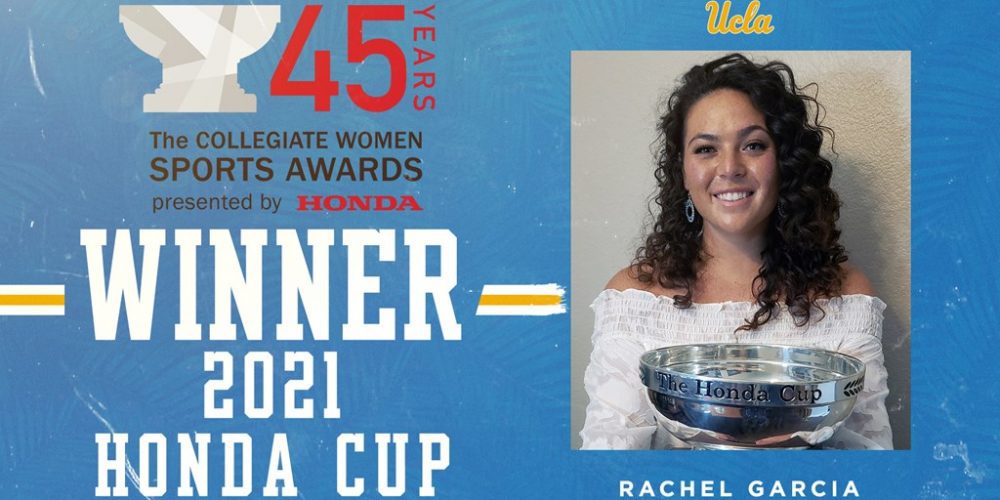 UCLA’s Rachel Garcia added another accolade to her name Monday in historic fashion, winning the Collegiate Woman Athlete of the Year Award for the second time.

The three 2021 finalists also included Madison Lilley (Kentucky Volleyball) and Anastasia Webb (Oklahoma gymnastics). The voting panel is made up of nearly 1,000 NCAA-member schools. The Honda Cup winner was chosen by the Board of Directors of the Collegiate Women Sports Awards program.

“I am honored and blessed to be receiving the prestigious Honda Cup Award,” Garcia said in a statement. “I am humbled for the recognition I have received after a year of challenges and uncertainty and I am very sure that every other nominee was as capable, if not more, of winning this award. None of this has been possible without the inspiration I have received from my fellow teammates, coaches and staff for whom I have the deepest respect, and from whom I have gained the strength to challenge myself and perform better at each stage. I sincerely thank each and every one of you for helping me get to the place where I can proudly hold up this award as a final mark of my achievement as a Bruin. Thank you!”

The CWSA, celebrating its 45th anniversary year, has honored the nation’s top NCAA women athletes for their superior athletic skills, leadership, academic excellence and eagerness to participate in community service.  Since commencing its partnership in 1986, Honda has provided more than $3.4 million in institutional grants to the universities of the award winners and nominees to support women’s athletics programs.