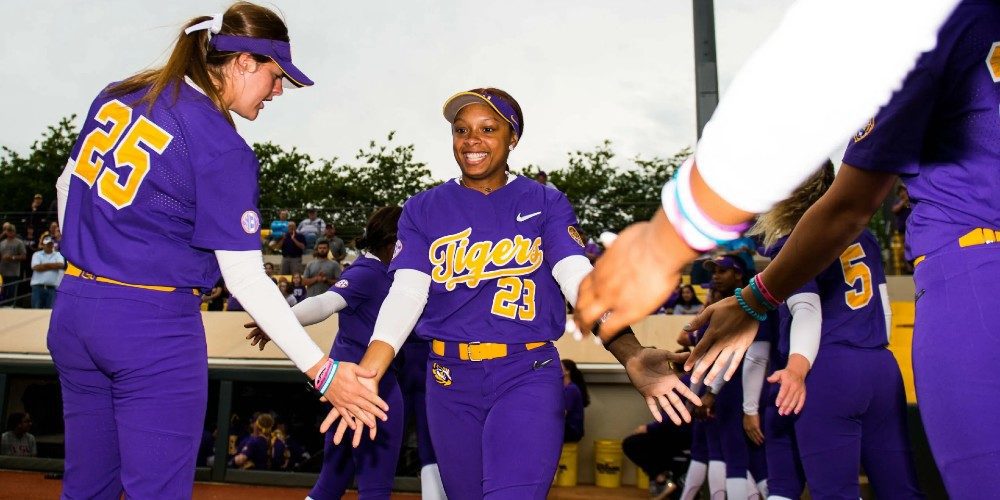 Shemiah Sanchez, who played for the Tigers from 2016-19 while battling lupus, needed a kidney.

LSU assistant coach Lindsay Leftwich instantly wondered what she could do.

“Once they are ours, they are family. They are Tigers for life,” Leftwich said. “We went through so much stuff with Miah and that doesn’t stop once they graduate. We can love her, pray for her and support her, but is there something physically we can do?”

Leftwich wanted to find out if she could donate one of her own kidneys. She filled out the paperwork and was tested, but wasn’t a match.

The entire LSU program is hoping someone out there eventually is.

Sanchez, a Newnan, Ga., native, was diagnosed with lupus, an autoimmune disease that occurs when a body’s immune system attacks its own tissues and organs, in 2012.

At first, it didn’t affect her kidneys. But during her freshman year at LSU in 2016, Sanchez, 25, visited a Nephrologist and had a biopsy done after lab work showed some markers for potential damage.

“They saw that the lupus was taking a toll on my kidneys. It’s called lupus nephritis,” Sanchez said. “After that, going into my sophomore year at LSU, I would go home once a month to do chemotherapy treatments to try and slow the damage and then go back to practice to try and earn a spot.”

Her kidney failure grew progressively worse, including flares during her senior year that she didn’t realize were occurring.

In May of 2021, Sanchez began receiving weekly dialysis and was placed on the kidney transplant list.

“I was kind of down because it was going to be a big change in my life with dialysis three times a week and between three-to-four hours during each treatment. I thought, ‘Man. I am so young for this,’” Sanchez said. “Also, the aspect of not being able to play softball was a big factor. That was a sport I loved so much and felt like something was taken from me.”

Her worry has been eased a bit from learning more about the process.

“A lot of people when they first go on dialysis, they don’t think they can live a good, healthy, long life. But just by talking with doctors and others who are going through it, you can still live your life and have a lot of life to live,” she said. “Dialysis doesn’t mean it’s the end.”

But receiving a transplant would mean Sanchez would no longer need to be on dialysis. Since she posted about her condition on social media recently to spread the word, the response from friends and family has been heartening.

Along with Leftwich, former LSU teammate Constance Quinn checked to see if she was a match (she was not).

“At first, I was a little nervous about what people would think about it. But everybody has been a great support to me and I am truly thankful for that,” Sanchez said. “Even people I don’t know or haven’t spoken to for years- everybody has been reaching out and sending love and prayers. It’s truly a blessing to have the support I do.”

Sanchez’s strength was on display throughout her career at LSU as she tried to play with lupus and her body breaking down.

“Some parts were a challenge because I didn’t feel like I could always keep up with the other girls. Sometimes I would struggle during workouts or at practice,” said Sanchez, who represented Puerto Rico in international competitions through 2019. “I just felt bad because I wanted to give it my all and sometimes I just didn’t have it in me that day and lupus was taking its toll on me. But I still pushed and worked hard and continued to try and do the best I could for the team.”

Leftwich remembers the learning curve for everyone involved with the LSU program when Sanchez arrived as a freshman.

“I don’t think we understood the severity of it because I don’t think she understood the severity of it,” Leftwich said. “She struggled with food intake and taking meds on time and doing all that stuff. But she continued to grow in that space over the years. She didn’t want to let lupus beat her. She changed the way she worked and everything about what her life looked like and it really boosted her forward.”

“When we are talking to the team, we always refer to Miah as our R. She is relentless and always the attacker,” Leftwich said. “We share her story with them and all she went through and still is going through, because there are so many days she wanted to give up and she never gave in.”

Although dialysis initially took a toll on her energy level, Sanchez has started to adjust to the weekly sessions. She recently accepted a job at Workday, a software vendor.

“Coincidentally, the hiring manager has a dad that had two transplants, so he is totally understanding of my process and what I am going through,” Sanchez said. “For the days I have to go to dialysis, I can work virtually.”

As much as she wants a transplant to help her live a more normal life, Sanchez doesn’t want people to feel pressure about potentially donating. She waited nearly a year to even post anything publicly about her need.

“I think it’s important to let everyone know that they can drop out at any time and bail out if they are uncomfortable with it or maybe having doubts,” she said. “People think once they enter and do the testing, they have no choice. But they do.”

Sanchez is keeping faith she will find a donor and get a new kidney. Until that time, she is focusing on what she does have in life instead of what she doesn’t.

“I am a firm believer that whenever the time is right God is going to send the right donor at the right time,” Sanchez said. “I am just holding on to that and trying not to get anxious and worried and just keeping my hopes up that one day the right donor will come.”

To see if you are a match:

Fill out an initial questionnaire at emorylivingdonor.org. It will ask for Sanchez’s name, date of birth and the transplant center (Shemiah Sanchez, 05/12/1997, Emory University Hospital in Decatur, GA).

Based on questionnaire results, if you are deemed to be a potential candidate, they will send a follow-up email with instructions for lab work and urine samples at a location near you.For more information, potential donors can also email [email protected]