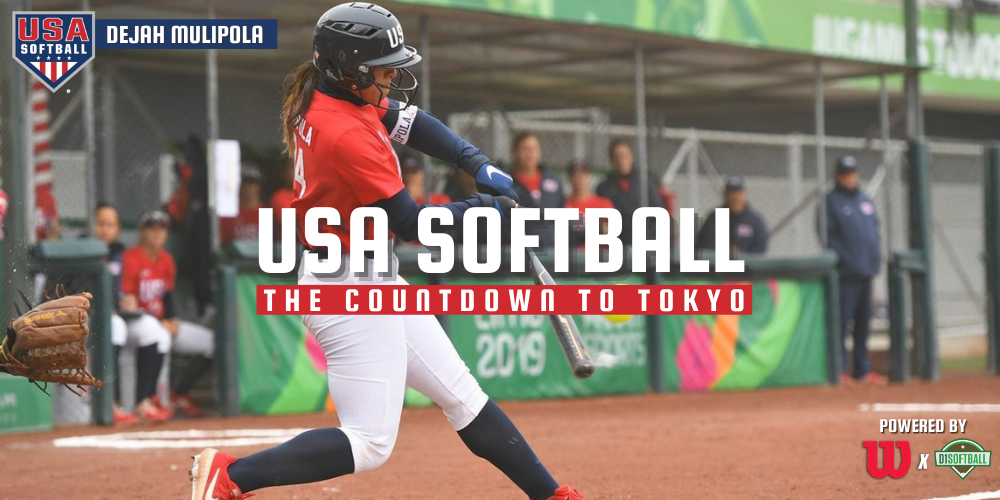 With just 18 weeks to go, we give you the #RoadtoTokyo powered by Wilson, as we feature one U.S. Women’s National Team member each week leading up to the Olympic Games.

Former Olympic Gold Medalist, Jessica Mendoza, sits down with Arizona Softball’s Dejah Mulipola to talk about her experience with Team USA and senior writer, Rhi Potkey, with the written story.

Dejah Mulipola was a budding rec ball All-Star when she went to watch the USA Softball women’s national team play in nearby Irvine, Calif.

Mulipola hadn’t followed the sport very closely before, and was transfixed by their performance on the field.

After the game ended, she grabbed a handful of posters and scrambled to get in line to have Jennie Finch, Tairia Flowers and Natasha Watley sign them.

Once she got home, Mulipola taped the posters above her bunk bed. She gazed at them every night before she went to sleep. Watley’s image held the deepest meaning for reasons that stretched far beyond the field.

“She was a player of color and had a muscular build like me. That was an inspiration for me,” Mulipola said. “It really sparked my interest just because I was a little girl on an All-Star team and I thought it was so cool to look at them representing our country and think I could do that.”

Mulipola’s dream became a reality when she was named to the Olympic team in 2019. The All-American catcher redshirted last season at the University of Arizona to travel with Team USA and prepare for the Tokyo Games.

But once the coronavirus pandemic postponed the Olympics until this summer, Mulipola and fellow college Olympians UCLA’s Rachel Garcia and Bubba Nickles of UCLA returned to their programs for the 2021 season.

Although Team USA has been competing and training together this year, Mulipola hasn’t worried about trying to balance both obligations.

“It’s been pretty easy just because everyone on the USA team is very understanding of our collegiate schedule,” Mulipola said. “They know we can’t always make every Zoom call, but they get really excited when we can hop on. They are always texting to check in on me and asking me how things are going. It’s not like I’m missing out too much.”

Despite Team USA’s tour getting cut short in 2020 because of Covid-19, Mulipola was able to soak up the time she did have being around the world’s best players.

She looked up to the veterans who have been through college. She was like a sponge at meetings, practices and team meals. She wanted to know anything and everything they would share.

“I got to learn the ins and outs of what these women do on a daily basis,” Mulipola said. “It’s pretty much like I was a professional athlete with no school at that time and strictly just softball. I got to understand how to be a pro athlete and how to take care of my body and mind.”

Mulipola adopted habits that she continues to employ at Arizona. She makes time to write in a journal, read her Bible and take breaks to unplug from the world of cell phones and social media.

Before she steps into the batter’s box during games, she relies on breathing and visualization techniques to calm her mind and lessen the pressure.

“The simplicity of the game. I think that is what these women tried to teach us,” Mulipola said. “The game is so simple and it is us that makes it difficult. They were sharing how to be able to slow the game down. I have been sharing that knowledge with our younger players, especially the freshmen. It has been super beneficial. It’s cool to be able to pass it along and give it to other people to take and run with it.”

Arizona’s Mike Candrea saw the growth from Mulipola once she returned to the program. The former Olympic head coach has been impressed with her leadership and ability to take her own game to the next level.

“Her presence on a day-to-day basis makes other people better,” Candrea said. “She’s got great rapport with her teammates. She’s a kid that everyone looks up to who does things the right way, so it’s a total package and we’re very excited to have her back.”

Mulipola realizes how much representation matters in the sport of softball. She follows what other Polynesian players are doing, and tries to stay in touch with them as much as possible.

“It’s cool to see how many big things they are doing for college softball,” Mulipola said. “It’s just really cool for the culture because there are not too many at this level. Kelani Ricketts was one of them, but now it’s starting to become more common and I think that is really great.”

Mulipola still thinks about the posters above her bed that sparked her dream of becoming an Olympian. She’s grateful for how much the game has grown under their watch, and how much more can be accomplished in the future.

Knowing that she may be the Olympian on a poster in a child’s room brings everything full circle.

“I literally get chills just thinking about it,” Mulipola said. “That is ultimately the goal, to inspire little girls and have them be able to look at me and say they can make it.”