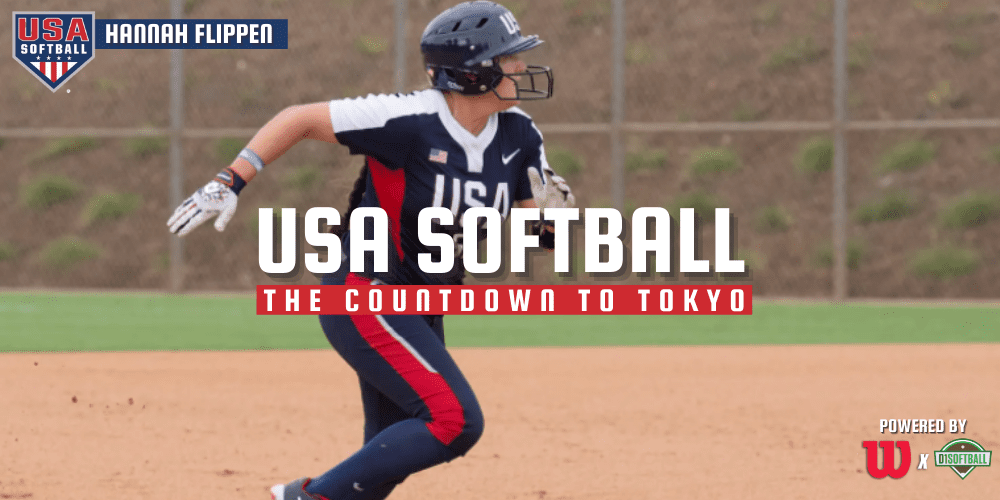 Hannah Flippen’s earliest exposure to softball came months before she even took her first breath. Flippen’s mom, Mary Lou, a former national championship pitcher at Utah State, played in an adult league in the San Diego area while she was still pregnant with Hannah.

“She had a game the weekend after I was born, so I was out on the softball field in the stroller literally days after I had just seen the world for the first time,” Hannah said. “Softball is truly ingrained in my life, and I am so happy that it is.”

Flippen will get the chance to experience the sport on the biggest stage possible this summer. The former Utah All-American is one of three replacement players on the US Olympic team roster that will compete in Tokyo.

Flippen admits it wasn’t something she envisioned happening as a younger player.

“I don’t think it was ever a dream of mine because my dream was to play in the MLB because that is what was in front of my face,” said Flippen, a San Diego Padres fan who grew up idolizing Tony Gwynn and Khalil Green. “But that is what makes me even more excited. Our team can empower and inspire young female athletes and show them the Olympics is back and little girls can have the Olympic dream to think about again now.”

“She told her, ‘Hannah needs to be in the USA program and I am going to figure out a way to get her there,’” Flippen said. “Laura Berg put in a good word for me and I received an email that I was on the elite team and to show up in Oklahoma City on July 5. I didn’t even have to try out. But from then on, I was invited back.”

Flippen remains grateful to Berg, a four-time Olympic medalist, for the faith she showed in her abilities.

“It’s really cool to know my USA experience started through Coach Berg, who believed in me and thought I was a great player,” Flippen said. “To have someone like that give you those words and say you have to be in the USA program is pretty cool.”

Growing up around her mom’s adult league team influenced how Flippen approached the game. She saw their camaraderie, competitiveness and unrelenting work ethic.

They dove for balls, slid hard into bases and rarely left the field without dirt on their uniforms.

“It was just an incredible experience,” Flippen said. “The only reason they were out there playing is because they loved the game and they loved the people they played it with. They were gamers.”

Unlike many of her peers, Flippen remained in rec ball until she reached high school instead of playing travel ball.

“I think that really helped me because I wasn’t playing to impress any college coaches and it didn’t get too intense for me at such a young age,” Flippen said. “I was playing because I loved the game and I wanted to have fun. I have never strayed away from why I am playing the game, which is because I love it and it is fun.

Flippen chose to attend Utah after falling in love with the program during a visit to Salt Lake City in the summer before her senior year in high school.

She became a three-time captain, and helped the Utes ascend in the Pac-12 Conference to become a Top 25 team and gain more national recognition.

“It was the best four years of my life. We were the underdog against these powerhouse programs and trying to make a name for ourselves. I think having a chip on our shoulder allowed us to really flourish competitively,” Flippen said. “I didn’t care who we were playing. I was Hannah Flippen and I was going to play to the best of my abilities and I am going to try to beat you and give it my all and see what the scoreboard says at the end.”

Flippen’s defensive abilities have become her trademark. She can play all spots on the infield or in the outfield and is even a catching option for Team USA.

“I think I am so passionate about it because I wasn’t the home run kid, so I was like how am I going to be a game changer without being that HR kid and it was defense,” Flippen said. “It was diving for every ball and trying to make every play possible so that way I could contribute to my team without being the RBI run producer.”

Flippen’s three older brothers unknowingly helped develop her quick hands with games of Butts Up on the side of their house as kids.

“We’d throw a tennis ball against the wall and you’d have to field it cleanly. If you didn’t you’d run and touch the wall or get hit with the tennis ball by everyone else,” Flippen said. “I guess that reinforced for me to field ground balls perfectly in the field or else you would be in pain.”

As she’s grown older, Flippen has learned to slow down and appreciate her surroundings more rather than racing through life with a one-track mind.

“That is something I want to pass along to young athletes. My first four years in Utah, I don’t think I even looked at the mountains. Now, I am in the outdoors every weekend hiking, camping and riding my bike,” she said. “I am learning to enjoy being where my feet are and being present with moments and relationships.”

Although Flippen takes great pride in representing Team USA, she is equally as proud to represent her family as part of the Olympic team.

She knows her journey wouldn’t have come this far without their support.

“My mom is my inspiration,” Flippen said. “She is my role model because she is what led me to the softball field. If it hadn’t been for my mom, I don’t know if I would have gotten there or played softball.”

Even though Hannah has conquered many of her biggest goals in the sport, one question remains unanswered.

“Everybody still asks me, ‘OK, Hannah. You vs. your mom. Who wins the matchup?’ I don’t know if I can beat my mom,” Flippen said. “She was the ultimate competitor and she is so strong and intimidating. I honestly don’t know who would win.”