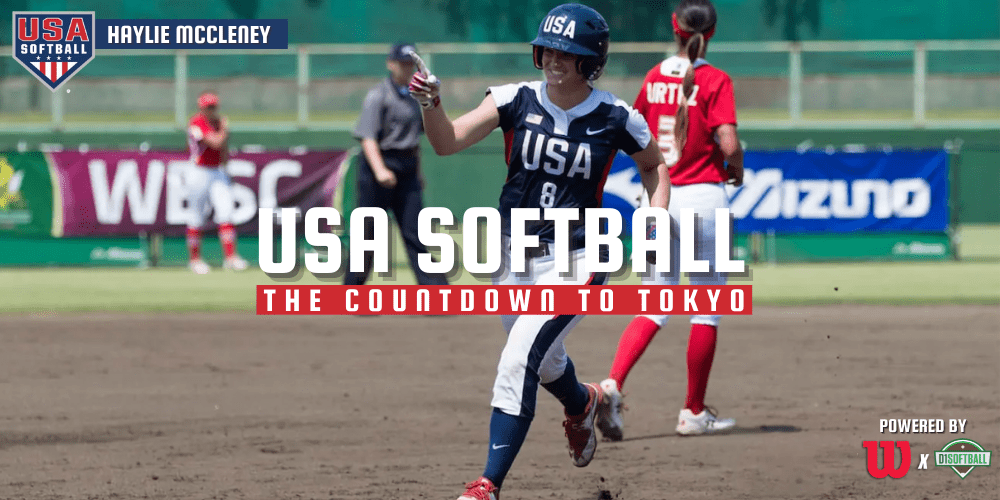 With less than 9 weeks to go, we give you the #RoadtoTokyo powered by Wilson, as we feature one U.S. Women’s National Team member each week leading up to the Olympic Games.

Former Olympic Gold Medalist, Jessica Mendoza, sits down with outfielder Haylie McCleney to talk about her experience with Team USA.

McCleney also talks about Team USA’s motto and her passion for being in the weight room.

Road to Tokyo: Haylie McCleney Comfortable In Her Own Skin

If not for a couple of inches, the United States might go to the Olympics this summer without arguably the most dynamic hitter in the world, not to mention one of its best centerfielders.

If she stood ever so slightly taller, Haylie McCleney might now be a local basketball legend somewhere in the South. The former mid-major star who led her college team to the Sweet 16 and then faded from the national scene. Or perhaps as likely, she would have walked on at the University of Tennessee and made her mark on a big stage.

You see, the outfielder who eventually became synonymous with University of Alabama softball grew up in that state as a diehard Tennessee Lady Vols basketball fan. Sure, she adores Alabama softball coach Patrick Murphy. But she didn’t grow up wanting to play for him. She wanted to play for Pat Summitt. Only the realization that a 5-foot-4 outfielder had better prospects than a similarly sized basketball player convinced her to shift her focus.

It wasn’t the last time she had to stop and ask herself who she was and what she wanted to do.

Nor was it the most consequential time. Not by a long shot.

She is a softball player in a world in which the sport still fights for professional respect and long-term Olympic inclusion. She is a professional athlete in a world in which that still doesn’t mean the same thing for world-class female athletes that it does for male athletes. She is a gay woman of profound faith from the small-town South, where that often remains a challenge.

She is all those things, not to mention a daughter, sister, friend, dog mom, strength coach and fiancée.

Only by piecing that puzzle together did she become the best softball player she can be, a worthy heir to former Olympic centerfielders Laura Berg, Caitlin Lowe and the sport’s past. And an agent of change for a future that is far from won.

“There’s no way I would be where I’m at if I wasn’t at peace with all those different elements,” McCleney said. “To be the leadoff hitter of the United States Olympic team, you have to be comfortable in your own skin to do that.

“I think you have to be comfortable in your own skin to play our sport in general because we play a game of failure nonstop. I think the only way to be comfortable with failure is to be at peace with yourself.”

On the surface, failure wasn’t something McCleney experienced in any great quantity growing up in Morris, Alabama, a small town between Birmingham and the Tennessee border. She won multiple state championships in softball and honors as a basketball player and student. She arrived at Alabama in 2013 with what was already among the larger social media followings of any softball player at the time, thanks in part to her work with Christian youth groups.

She excelled at the life she assumed she was supposed to live. The life that all the social cues around her suggested was the ideal. Be the local sports hero. Marry someone from town. Settle down and teach Sunday school.

They are entirely worthy ambitions if they match up with who you are and what you want.

Except that they didn’t for McCleney.

Some of that is her sexuality. Being gay in a small town in a conservative state is still to be other. McCleney admitted she even worried at times that she might lose her family if they knew. While she didn’t — not even close — it is difficult for a teenager to know that. But it wasn’t just about sexuality. She gradually realized she didn’t want the life that she saw so many others assume anyone would want. She wanted to go places and do things. Which places and what things she could figure out later.

“I had this idea of what a ‘perfect’ woman was like,” McCleney said. “I just wanted to be that. I wanted to be like the image that people thought I should be. And it just wasn’t really who I was.

“I still think, at the core of who I am, I’m a people pleaser. I want everybody around me to be happy with who I am and what I say. But at the same time. I’ve learned that it’s a lot happier on my end to be me and be authentically me.”

She found some of that authentic self in college playing for the Crimson Tide. But she found even more in the years after she graduated, when she was no longer the small-town high school star or the All-American on a sports-obsessed campus. Suddenly she was just the graduate student at Florida Atlantic, working toward a goal of becoming a strength coach and finally living near then-girlfriend, now fiancée, Kylee Hanson.

Moving far from her comfort zone showed her who she wasn’t. She wasn’t the teenager trying to be the “perfect Godly woman.” She wasn’t merely the collegian content to be the embodiment of the Tide’s “Mudita” creed of selflessness. But who was she? That search tested her. Growth often comes with stepping out of your comfort zone.

“It was a huge leap of faith for her, just to go from Alabama to Florida,” said Hanson, the former FAU and Florida State standout. “That was a huge growth step. I never would have pictured that. When she was coming out of high school, I was like ‘She’ll never move.’ We’re both very similar in that way. We’re very attached to our families.”

She went to Tallahassee when Hanson transferred to Florida State. She talked about life with Seminoles coach Lonni Alameda. She studied her faith in ways she never before had.

“My sexuality actually brought me closer to God, closer to my faith,” McCleney said. “I wanted to find out for myself ‘Does God really love me? Am I going to hell in a handbasket like all these people say, just because I’m in love with one of the most incredible women to ever walk on the face of the earth in Kylee Hanson?’

“I dove into it myself, which I had never really done. … And throughout all of that, I felt this overwhelming sense of I am loved and covered no matter what.”

When Hanson and the Seminoles celebrated on the field in Oklahoma City after winning the 2018 World Series, McCleney stood nearby with a smile on her face. She was all but anonymous in the crowd of family, friends and loved ones. One of the college softball’s all-time greats — a player who delivered an emotional message about the power of sports after she lost her final college game on the same field — never looked more at peace on that particular field than in those moments after Florida State’s win.

Peace of mind didn’t come by driving a ball into the gap, reading a line drive off the bat to make a diving catch or even by winning a game.

That’s the journey she took to be able to make the journey to Tokyo as Team USA’s leadoff hitter. A two-time world champion, she needs only Olympic gold to take her place alongside the best who ever played for the national team.

“She’s a great leader for our team; she’s someone we can all go to and look to in any situation,” USA teammate Ali Aguilar said. “One thing for me that really helped, being her roommate, is she has such a simple mindset toward the game and toward life. She’s just like ‘OK, let’s do it, let’s get it done.’ She helped bring that out of me, just a very positive and uplifting mindset.”

That peace of mind affords her a louder voice. Two years ago, the same day the U.S. women’s national team won soccer’s World Cup, McCleney reposted a USA Softball graphic with of the centerfielder juxtaposed with Megan Rapinoe. At first glance a stark contrast in personalities, it depicts two women with more similarities than differences. And if the Olympic stage gives softball players a bigger megaphone, McCleney is ready to use hers.

You bet she is grateful for the opportunity to finally play in the Olympics. But after playing for years on what was essentially a pro bono national team and experiencing the vicissitudes of softball’s often slapdash professional structure, she knows players deserve better. Olympic-level funding and the debut of Athletes Unlimited last year have offered a taste of such a world, even as the pandemic delayed the Games.

“This is the first time I’ve felt like a professional athlete as a woman,” McCleney said of the past 18 months. “I’m not saying we should make millions of dollars just because we’re professional athletes. I get that a lot of that stuff is revenue based and status based, but I do envision a sports world one day where if you’re a world-class athlete, you’re a world-class athlete.”

“As more things come up politically and socially, she gets more and more passionate,” Hanson said. “I do believe that she’ll be a big advocate.”

She is who she is, the totality of everything that goes into that.