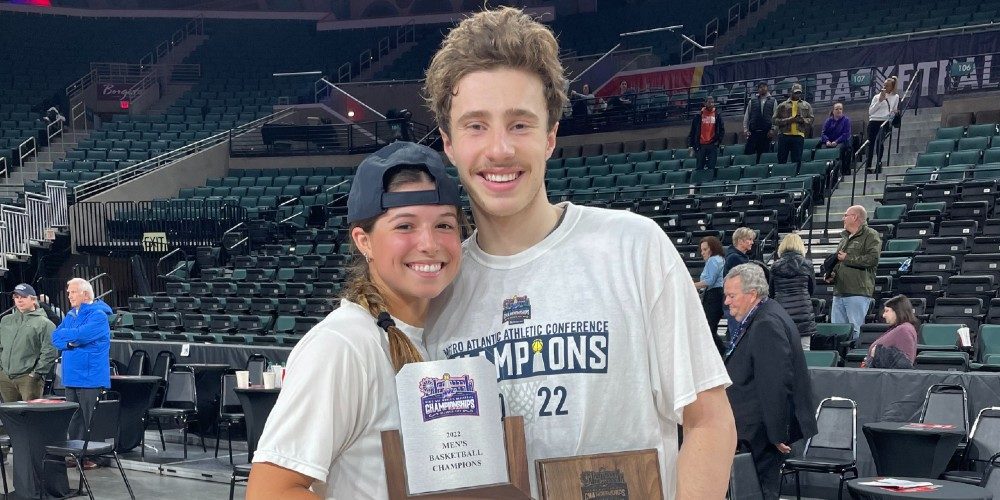 Before he became the mustachioed darling of March Madness, Doug Edert decided to shoot his shot two years ago in his freshman English class at Saint Peter’s University.

Edert approached Olyvia Smith, an outfielder on the softball team, with an inquiry.

“He asked me a question about an assignment that he knew the answer to. That was his way of talking to me,” Smith said. “It’s kind of funny how he played that off. That is how we first got things going, and from there it has been good.”

Neither could have ever imagined the thrill ride they’ve been experiencing over the last week as Saint Peter’s became the Cinderella of this year’s NCAA men’s basketball tournament.

The No. 15-seeded Peacocks first shocked the world by upsetting No. 2 Kentucky in the first round, and then beat fellow mid-major Murray State to advance to the Sweet 16 for the first time in program history.

The Jersey City, New Jersey school has been thrust into the national spotlight, gaining new fans and followers by the hour. They all want to learn more about basketball coach Shaheen Holloway and his Jersey tough team.

“It has been awesome for the school because I have seen how Shaheen has been slowly building that connection with the campus community by the way his team plays and the type of kids they are,” Saint Peter’s softball coach Chris Stelma said. “It has just kind of exploded. It’s not something you can force or fake.”

It’s a relationship Stelma values, and was glad happened organically.

“I was excited when I saw how into their games my team was. I knew Shaheen was building a winner and knew our girls were close to that excitement and was hoping it would translate over,” Stelma said. “We are 11-10 this season, and we were nowhere near .500 in my time here the last six years. The girls are learning about that winning culture.”

Stelma is hoping the national recognition Saint Peter’s has received this month will help in recruiting. He’s already noticed an uptick in interest.

“Without a doubt, and quite frankly it came at a good time. Everybody started looking (Saturday) night and our softball team is sitting at .500,” he said. “I am definitely noticing recruits I maybe haven’t spoken to in a while are excited and our current verbal (commitments) and signed kids are building better relationships with the spotlight on our school.”

Smith has been trying to balance her own athletic and academic demands while not missing a minute of Saint Peter’s NCAA run. She’s attended all the watch parties on campus to savor the moments among classmates.

“It has been crazy. Obviously, I am trying to stay focused on my game as well but also supporting Doug and the team at the same time,” said Smith, who is batting .352 with 14 runs scored in 21 starts. “It is very exciting and overwhelming. But it has been a lot of fun.”

Smith played a small role in creating the famous ‘stache that’s made Edert even more of a March Madness cult hero. Edert’s teammates regularly cut his hair, and Smith is usually present to help advise.

“He was about to shave it last month, but his roommates said ‘wait a second. You should keep it,’” she said. “I was like, ‘I don’t know about that.’ But he wanted it and he thought it was tough, so he kept it. Ever since then, he’s taken it and ran with it. He loves it so I love it.”

Smith is extremely superstitious in her own routines for softball games. She wears her hair the same way, uses the same hair tie and eats the same meal.

She knows Edert won’t mess with the juju of the ‘stache in the midst of the team’s Cinderella run. But will it remain once the season ends?

“Before we won these past two games, I would have said it was probably coming off. But right now, it doesn’t look like it’s coming off any time soon,” Smith said. “This is him now and I think he’s embracing that. I just let him do him.”

Edert, who scored 20 points off the bench against Kentucky and 13 against Murray State, has called Smith after each game in the tournament.

“He is definitely excited. But when I talked to him, he honestly said he’s not nervous, which surprised me because I am nervous for them,” she said. “But after all the attention they are getting right now, he is still not nervous. He is just that kind of guy. He knows what he can do and he knows the game. He doesn’t let anything get in the way. I am super proud of him.”

The softball team has this weekend off from games. Stelma and the players are planning to drive to Philadelphia to watch Saint Peter’s play Purdue in person on Friday in the Sweet 16 at Wells Fargo Arena.

“I hated it when I first saw we had that weekend off, but now I know why,” Stelma said.

Added Smith without missing a beat, “It was meant to be.”