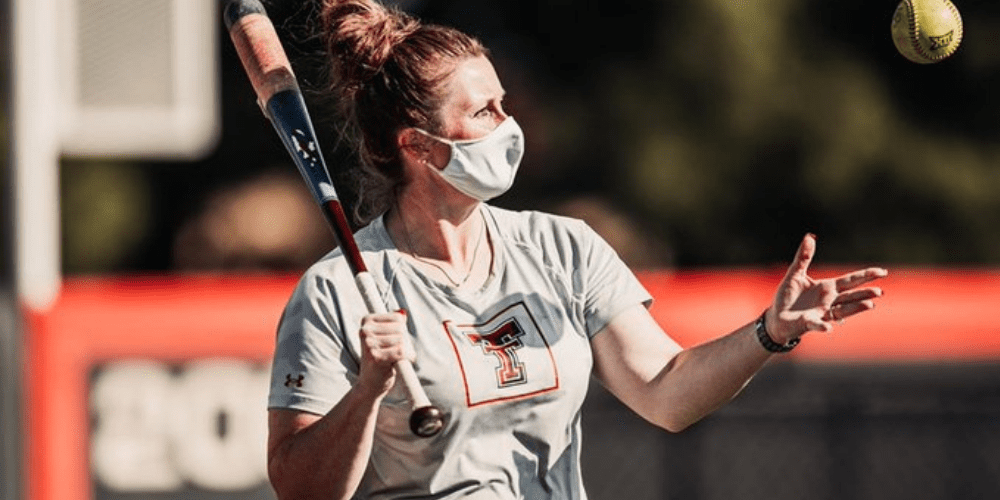 There aren’t many chances in life to send a “Mama I made it!” text message.

Getting to create a signature burger at the school’s on-campus restaurant certainly qualified for Texas Tech head coach Sami Ward.

Red Raider Meats restaurant and catering manager Adrian Rodriguez asked Ward last May if she wanted to have her own burger featured on the menu board.

It took Ward less than a minute to respond.

“I emailed back saying ‘Adrian – or should I call you a dream maker? – because this is the dream I never knew I had,’” Ward said. “It is one of the most awesome things in the entire world.”

Ward was given a list of different toppings to choose from to make the burger, and she even got to pick the name.

The Slamming Sami Signature Spicy Burger is a double burger with jalapeño bacon, jalapeños, fried pickles, an onion ring, spicy ketchup, Dijon mustard and double pepper jack cheese on a Slaton Bakery bun. It comes with tater tots, fries or onion rings. The price tag for the ginormous meal is $9.79.

“My first reaction was, ‘Oh my gosh, is she actually going to be able to eat this?’ It is pretty big,” Rodriguez said. “I thought, ‘Oh boy, we are going to need toothpicks to hold this thing together.’ All the coaches’ burgers are a decent size, but I think hers is probably the biggest one we have.”

Even though Kingsbury was fired in 2018, Red Raider Meats has kept his burger (Too Turnt Up – grilled onions, jalapeño bacon, fried egg, cheddar cheese) on the menu because of its popularity and Kingsbury’s alumni status.

Tech baseball coach Tim Tadlock was the only other coach with a signature burger on the menu in the last few years (The Tadlock – grilled jalapeños and mustard).

Ward visited the Red Raider Meats last Friday to taste her signature burger. It was the first time the burger had ever been made.

“It was huge. I had to scrunch it down a little bit to get it in my mouth,” Ward said. “But it was delicious. The meat was awesome and everything was such high quality.”

Ward opted for the tater tots on the side and experienced gastronomic bliss.

“They were the best I’ve ever had in my life without a doubt and I love tater tots,” she said. “They were really crunchy on the outside and really hearty and fluffy on the inside but not soggy at all.”

Not surprising for a Texas-based school, Texas Tech has a storied meat history.

The university bills itself as “home to one of the most dominant meat judging programs in the nation.” The Red Raiders have won 14 national championships since 1989.

Meat Science and Muscle Biology instruction began at Texas Tech in 1933, and the first laboratory was a modified Army barrack with minimal equipment. In 1988, a 14,000-square foot meat laboratory was constructed. The building housing the Department of Animal and Food Sciences, where Red Raider Meats is located, was completed in 2005.

The retail store sells high-quality aged beef, lamb and pork. Items are also available at local grocery stores, and beef steaks and roasts are distributed by US Foods to restaurants throughout the South Plains region. Shipping is available to all 50 states.

Entering her second season as Tech’s head coach, Ward is still discovering all the university has to offer. She has been impressed by what she’s learned about the meat science curriculum.

Ward grew up in Oregon and her family raised pigs and chickens on a small farm.

“My family would use them for our own food or give it to other people to make it sustainable,” said Ward, a former standout pitcher and utility player at Loyola Marymount University. “We would trade our pig meat for cow meat and keep it in a huge, deep freezer. It really made you appreciate the entire process more.”

Ward treated her coaching staff to a meal during their visit to Red Raider Meats last week, and her husband gave The Slamming Sami a five-star review.

“He is not a big spicy person, but in the ultimate support of me he tried it and he loved it,” she said. “He said the spice is not overwhelming, just really flavorful in all the right ways. It doesn’t make your mouth go on fire.”

Rodriguez was glad to finally meet Ward in person and witness her taste the burger she was so eager to create.

“We knew we had a winner with her because she responded right away when we asked,” Rodriguez said. “She had her burger designed within 15-20 minutes of us sending the email. She was stoked. She was super excited about it and that makes you feel good.”

Ward wants to have Red Raider Meats cater some team meals, and expects to place quite a few orders for The Slamming Sami for as long as it remains on the menu.

“I am not going to lie, I see myself going there at least once a week because it’s so delicious,” Ward said. “It’s such an honor to have this happen at this university.”