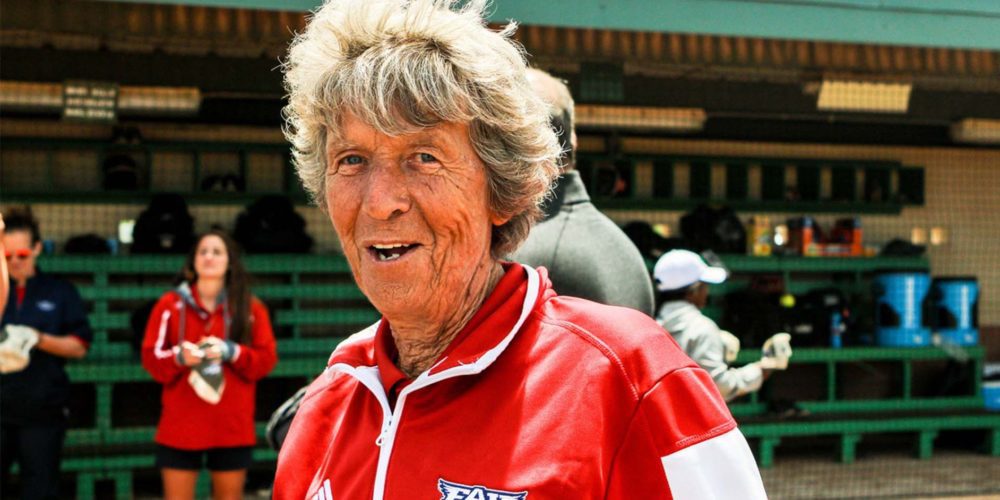 Florida Atlantic University coach, softball legend and sports pioneer Joan Joyce passed away over the weekend. Joyce, who won her 1,000th game as a coach on March 18, was 81.

To understand Joyce’s story is to understand the history of women’s sports in this country. She was already a legend when Title IX passed in 1972 — more than a decade after she struck out Ted Williams in an exhibition softball game. She was already a professional athlete and a women’s sports legend by the time the NCAA finally and belatedly followed through on the promise of Title IX and brought women’s college sports under its umbrella in 1982.

She wasn’t the product of Title IX. She was the inspiration for it. Along with names like Babe Didrikson Zaharias, Althea Gibson, Bertha Tickey, and Billie Jean King, her excellence demanded equality.

The sport she still coached with distinction until her death is a constant reminder of Title IX’s transformative effect. On the 50th anniversary of the landmark legislation, the television broadcasts, packed stadiums, social media engagements and even name, image and likeness opportunities in contemporary college softball speak to how a sport continues to grow. Yet Joyce’s presence in the dugout, as far from the money and lights of the major conferences as it was, offered its own constant reminder of what made Title IX not just possible but necessary.

She played, and equality followed. Not the other way around.

Born in Connecticut shortly before World War II, Joyce first made a name in softball as a pitcher with the Raybestos Brakettes. One of the most successful teams in the history of any sport, the Brakettes of Stratford, Connecticut, dominated the sport through the 1950s, 60s and 70s of her youth. When the first ISF World Championship took place in 1965, the Brakettes represented the United States, effectively doubling as the national team. When an American team won for the first time in 1974, Joyce was in the circle in the championship game against Japan.

And it was while she was with the Brakettes in 1961 that she faced Williams in Waterbury, Connecticut, in front of a crowd bigger even than those that now flock to Hall of Fame Stadium in Oklahoma City for the Women’s College World Series.

“I remember the crowd going crazy — but after all, it was in my hometown,” she told ESPN on the 50th anniversary of the game. “In my opinion, that’s what made me famous more than anything.”

The numbers from her playing career — more than 150 no-hitters, 50 perfect games, 750 wins — don’t even require context. Like Satchel Paige, the numbers write their own legend.

Joyce was part of the first post-Title IX attempt at professional softball, playing in the International Women’s Professional Softball Association that King helped launch. But she was already a professional athlete by then, having joined the LPGA Tour in the 1970s. She didn’t have a background in golf, taking up the sport as an adult. She was just that good of an athlete.

It’s why she also represented the United States in basketball in the 1960s and was a more than passable volleyball player.

Imagine some combination of Jim Thorpe, Jim Brown and Bob Gibson taking over as coach of a college sports program and you have some sense of who FAU hired to launch its softball program when she left pro golf in 1995 (she also coached golf). Yet Joyce, whose softball team went 33-18 in her first season and who endured just three losing seasons in Boca Raton before the pandemic, operated largely under the radar. Even as she won 12 conference championships, made 11 NCAA Tournament appearances, was an eight-time coach of the year in her conference and won 1,000 games.

Anniversaries of milestones sparked occasional stories, and those who knew the story revered her — former FAU All-American pitcher Kylee Hanson ended up at the school, in small part, because her dad watched Joyce pitch for the Connecticut Falcons in the professional league. But for the most part, even as the sport boomed in Florida and throughout the SEC footprint after the 1996 Olympics, her name slipped out of the spotlight. She never seemed to care all that much. She liked her life in Boca Raton, far more interested in competing than retiring.

“Our program has been pretty successful,” Joyce said in 2016. “It really comes down to having the pitching staff that I need. I believe most schools are not going to win World Series unless they have really good pitching staffs. … Can we go into a Florida regional and knock off Florida? Absolutely. If we had to play them a 10-game series, we probably couldn’t win it. But if we had to go in and play them one or two games, can we win? You know, that’s a crapshoot, as far as I’m concerned.”

Those who played for her came to know the legend — Hanson once joked that she only heard about the Williams strikeout once a day. But mostly they came to know a woman with the wisdom of a life boldly lived.

“We have a lot of discussions about Dunkin Donuts,” Hanson said in 2016. “I’m not even kidding, we really do talk about coffee quite a lot. But I can talk to her about pretty much anything. If I have anything going on with my family, my friends or even my teammates, I’ve been able to talk to her about anything. We have a lot of bullpen conversations that don’t always relate back to softball.”

It is a bittersweet legacy that Joyce was among a group of pioneers who dreamed so big and excelled to such a degree that they gave future generations the luxury to forget them. Some of today’s players may know the name. Even fewer probably know exactly what she did. But we forgive that in youth. We only ask them to be good stewards of what those before left them.

“It’s all about the shiny things these days and Joan Joyce is not shiny,” former FAU All-American pitcher Nikki Myers said in 2016. “She’s not going to show up in all of her Nike gear and her fancy warm-up suit. She doesn’t have all the shiny things. So I would expect that most of this generation, the really good kids, would not know who she was and would overlook her.

“I think that when people do finally figure out who she is, then she commands the respect.”

Few athletes ever did more to earn it.

In losing Joyce, softball lost part of its soul. But perhaps it can at long last appreciate the legend who helped shape not only a sport but a world for women in sports.

〈
Previous Article How the Top 25 Fared: Week 7
Next Article Brady's Breakdown: No. 25 LSU at No. 9 Arkansas
〉