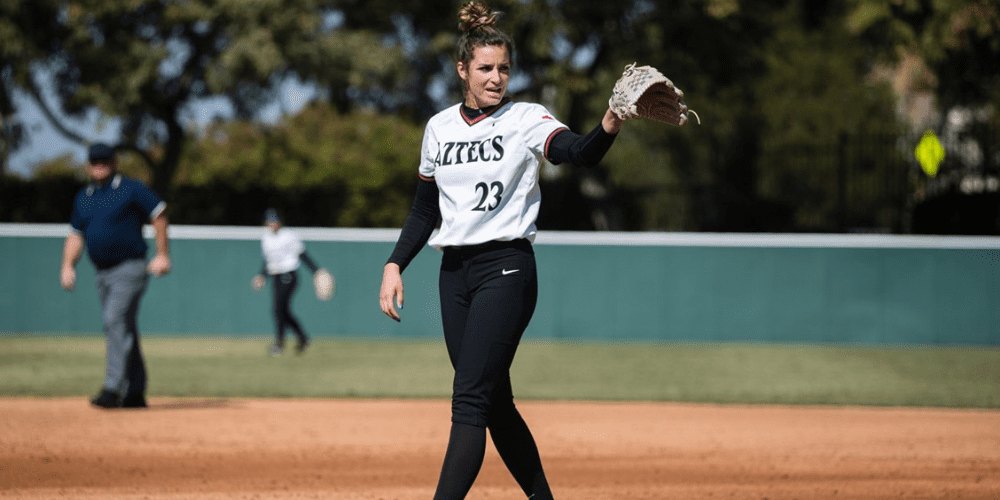 Softball was Maggie Balint’s everything, until it made her nothing

Everything Maggie Balint had envisioned for herself was coming together. Fresh off a sweep of Florida State late in 2017, Balint and her Oregon Ducks showcased their reasoning to be a national championship contender.

But after earning NFCA Pitcher of the Week for her performance against the Seminoles, Balint hardly pitched the next few weekends and in the Ducks’ postseason. Then, her innings significantly decreased the following season. But why? Oregon had Miranda Elish and Megan Kleist, but they were there in 2017. Balint also was coming off a First Team All-Pac-12 honor and finished in the top three for NFCA National Freshman of the Year.

It had nothing to do with Balint’s right arm, and all to do with her back. Before the 2017 postseason, Balint started to deal with a L5-S1 bulging disc in her lower back. It lingered. It controlled her. Above all else it destroyed her self-worth.

“When I got to Oregon, everything was eat, drink, sleep, softball,” Balint said. “Everything had to do with softball. It was very painful. I couldn’t sit, I stopped eating, I couldn’t work out…I was so moody because of the injury. When you think your world is ending because of this injury, it’s a different way you look at life. It sounds so silly and stupid, but you look at it life so differently when you can’t perform. It’s an obsession.

The Pennsylvania native had picked up her life to move over 3,000 miles to play softball for the Ducks. That’s what fueled her desire to go to college, hurling that fluorescent yellow ball at the highest level. Things turned from bad to worse. Dealing with her own internal issues, Balint, like many others, got caught in the ugly divorce between head coach Mike White and the University of Oregon.

After the nation’s top seed in the 2018 Women’s College World Series failed to even reach the finals, the Ducks divided. A majority of them followed White to Texas, others found their way to places like Alabama and Louisiana. Balint never intended on leaving, but even after giving it a try for a few months under Melyssa Lombardi, she felt like Oregon wasn’t the place for her.

Balint knew she couldn’t choose her next school solely off softball, or any decision frankly.

“I was looking for a school that offered me more than the softball aspect,” Balint said. “I knew I needed somewhere that I could get a career with. I needed to have flexibility for a job, an internship. Time for myself, my family, friends. I didn’t want the bulk load that softball had, but I still wanted to play…When I left Oregon I had very little job experience, almost no student-athlete does.”

She found a home at San Diego State. She got softball, the education, the work life, the social life, and the addition of a beach. Balint had time to experiment in what she wanted to do professionally. She worked in marketing at a financial company and insurance summarizing different plans. There was never going to be this type of opportunity at Oregon.

Yet, this isn’t your typical “student-athlete finds their happiness again at a new school after transfer,” story. The reality is, Balint’s internal battles and negative thoughts stuck with her like a thorn in her side. It went back to the idea that she really felt like she was forced to leave Oregon.

She compared everything about San Diego State to her former school. The budget and funding was not comparable. She kept saying that “well, we didn’t do it like this at Oregon.” Balint stayed frustrated believing that she wasn’t getting what she needed.

It was to the point that Balint considered re-entering the transfer portal for her final season. However, as she learned the first time, the grass isn’t always greener on the other side immediately. Balint stopped comparing everything that was different between the two programs, and realized there was only one common denominator, herself.

“The first year and a half, two years, I was not happy as I am now at San Diego State,” Balint said. “I was fighting these negative thoughts of what happened at Oregon over here. To the point that I told myself I have to accept where I’m at or I need to leave…It’s not about me jumping ship. I need to figure it out, and figure it out quickly. I had all these negative thoughts and it was time to put an end to it.

“I had to have a conversation with myself, which was not very fun. Not a delightful thing to tell yourself that you need to grow up and get over it. Once I came to it and realized what the issue was, that it was within me, it was my standards and my expectations.”

Instead of comparing, Balint started taking a ton of pride in being a part of the Aztec program. Not only did she want a school that offered her more opportunities away from softball, she wanted to help build something.

“I wanted to work with a program to put them on the map. I didn’t want an Oregon, and they were already a top 10 team when I walked in,” Balint said. “I wanted to work our way up because it’s different. It’s different when you get treated differently than you once did…Walking around in a San Diego State uniform is more powerful than anything I ever did in an Oregon uniform. For all the hard work that I’ve done with my personal self reflecting, the team, the coaches have done a great job with this program. It’s refreshing that trusting the process has given us just a bit of our goal.”

It’s worked for her and San Diego State. The Aztecs entered the Top 25 rankings before their Mountain West series against UNLV. Balint has returned to dominant form in the circle. She has a 1.31 ERA this season with 179 strikeouts to 19 walks. Yet, she’s more proud of what she’ll do off the field this spring.

She never thought she’d get her master’s degree, but once the semester is over she’ll have finished her education counseling degree. She wants to be a psychologist and be involved in the mental health field. It’s very important to her to help others through her experience.

“We hear things in our ear from the time we’re 10 years old till now. Everyone in your support circle is constantly talking about it in a positive manner,” she said. “But when the negative hits, it hits. When you have other passions than the sport you play, and you can identify them, that’s what gives an individual confidence. And that helps them know who they are as a person.”

As the saying goes, “If you love something let it go free. If it doesn’t come back, you never had it. If it comes back, love it forever.” Balint has rekindled her love for softball through this journey, but more importantly, she found herself along the way.