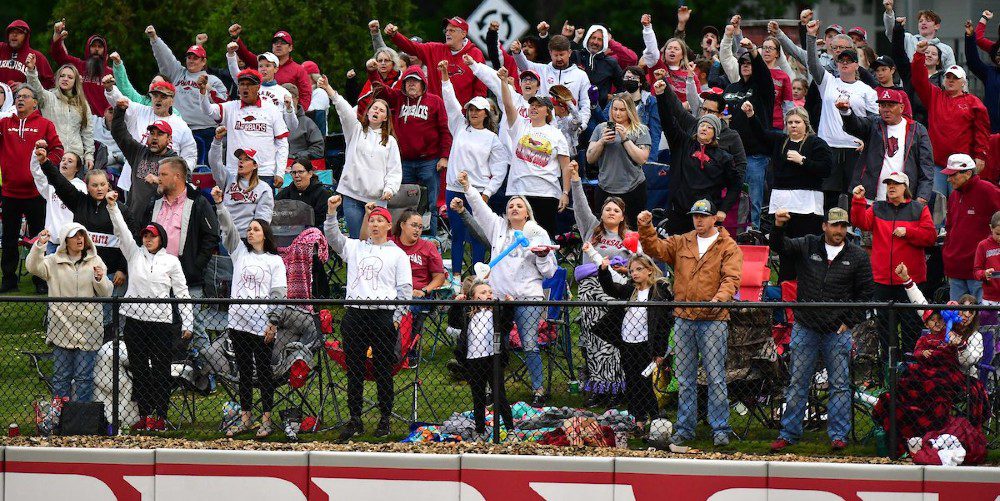 The NCAA Super Regionals have been a hot ticket. Fans will be packing the stands across the country to watch the 16 remaining teams try to earn a spot in the Women’s College World Series.

It’s yet another sign of the growth of the game.

Tickets sold out within minutes at some venues. Facilities have added bleachers and berm seating to accommodate more fans. Schools have created areas nearby where fans who can’t score tickets inside can still watch the games live on video boards.

I plan to update all relevant attendance information throughout the weekend in this post, so check back frequently for updates, facts, figures, photos and videos.

The action started last night in front of large crowds in Fayetteville, Arkansas and Stillwater, Oklahoma. It kicks into high gear today with every Super Regional best-of-three series playing games.

If you are attending a game, you can share the photos with D1Softball on our social channels via Twitter, Instagram or Facebook. Tag us and let us know where you are at the games.

For the second straight day, MSU set a program record for attendance at Nusz Park with 2,299 fans showing up to watch Game 2 between the Dawgs and Arizona.

The first winner-take-all Game 3 of this season’s Super Regional is taking place at Bogle Park in Fayetteville with Arkansas playing Texas. The fans were lining up early to get their seats in what has been a record-setting attendance weekend.

It’s another full house at Tech Softball Park for Virginia Tech and Florida and fans were treated to 10 innings of softball. The Hokies finished off the final three innings of a weather-delayed Game 1 to win 6-0, and Florida forced a winner-take-all game tomorrow by beating Virginia Tech 7-2 in Game 2.

The crowd will be ready. Virginia Tech shared these photos with us.

They have a record crowd in Stillwater tonight for Game 2 against Clemson. The announced attendance at Cowgirl Stadium is 1,384, which is the largest in history.

The Sun Devils are playing in front of a sold-out crowd of 1,952 tonight in Game 1 vs. Northwestern. Many former players have made their way to Club Farrington to cheer on the team.

Stanford’s official attendance for Game 1 vs. Oregon State was 1,127. That included the Stanford Tree. I don’t think Tree needed a ticket to get in the Smith Family stadium gates.

The Hogs are playing in front of another huge crowd tonight in Game 2 against Texas as they try to clinch a spot in their first WCWS.

The tickets sold out within minutes for the Norman Super Regional, but one of the greatest football coaches of all time was able to snag a seat. OU and Dallas Cowboys legend Barry Switzer is in attendance for Game 1.

Even with weather report that eventually led to an extended delay with Virginia Tech leading Florida 6-0 in the fifth inning, Hokies fans poured into Tech Park for the second straight weekend as Blacksburg hosted NCAA games for the first time.

The home fans responded to the first Super Regional appearance in Mississippi State history. They set a record with their turnout for Game 1 on Friday afternoon.

The Cardinal have sold 1,007 tickets for tonight’s Game 1 against Oregon State at Smith Family Stadium and 990 tickets have been purchased for Game 2 on Saturday.

In case you’ve never been able to attend a game in Stillwater, the OSU creative staff provided a video of why Cowgirl fans think the environment is so special.

Here is a primer to get you ready:

Tickets sold out fast for the Super Regional against Texas at Bogle Park. But Arkansas didn’t want to turn fans away. The Hogs added a new overflow seating area dubbed “Beyond the Berm” just beyond right field where fans could watch without needing a ticket. Across the street from Bogle, a large video board truck has been set up to broadcast every game and food trucks are located nearby. Fans are able to bring lawn chairs and coolers and tailgate in the area. (or just find a nearby roof to view the game as two fans did last night).

The attendance for Thursday night’s 7-1 Game 1 win over Texas was 3,100, which would rank third all-time in program history.

The Sooners have been the sport’s biggest draw at home and on the road. Within 15 minutes of announcing Super Regional tickets were on sale, the limited number available were sold out.

Marita Hynes Field has a capacity of 1,378, and the Sooners found a way to expand the experience for fans that can’t get tickets. They opened Home Run Village. The interactive entertainment area on the lawn immediately west of the field gives fans a free option to watch the game on a video board. The village opens two hours before first pitch for a fan fest with music, food vendors and giveaways and runs through all the games.

The Cowgirls opened Super Regional play on Thursday night with a 2-0 win over Clemson in front of 1,068 fans at Cowgirl Stadium. The largest crowd in stadium history was 1,374 in 2019.

Along with seating inside the facility, Cowgirl Grove is open behind the stadium all weekend. Fans can bring lawn chairs, blankets and food to sit and watch the games live on a video board

The Bruins sold out their all-session ticket packages, and only single-game tickets remained on sale as of Thursday. The commitment from fans is always more admirable in L.A., where they have to fight the traffic and spend hours in their vehicles just to reach the more than 1,300-seat Easton Stadium, especially on Friday night. UCLA head coach Kelly Inouye-Perez was encouraging fans to pack the joint.

A few things are usually assured to happen at “Club Farrington” – balls will be flying out of the stadium and the ASU players will put on a good show to celebrate.

The ASU grounds crew was even helping promote the Super Regional against Northwestern. They want everyone to watch the players perform on the field they faithfully maintain each day.

It was an unexpected surprise to have Super Regional games at Smith Family Stadium. But the Stanford fans quickly grabbed all the tickets for the all-Pac-12 showdown against Oregon State.

Stanford is expecting more than 1,000 fans each day. The stadium has more than 800 seats, plus general seating on the berms. The Cardinal average attendance this season was 581 at 25 games, which is the highest average attendance dating back to 2008. The total attendance of 14,548 was the four-highest in that span.

The Cardinal players did their part by taking to the campus streets, dodging bikes and skateboards to encourage students to attend the Supers.

The first Super Regional in program history is expected to draw large crowds. Mississippi State has expanded the outfield decking at Nusz Park, and the outfield parking lot has been converted into a standing room-only plaza.

As of Thursday afternoon, all reserved seating tickets were sold out and only standing-room only passes remained on sale while supplies lasted.

“We’re looking forward to a great crowd. Everyone here at Mississippi State has really been working hard and long hours to make this happen,” MSU head coach Samantha Ricketts said. “We’re so excited to see what’s going on in the outfield and all around to accommodate as many people as we can for this weekend’s games.”